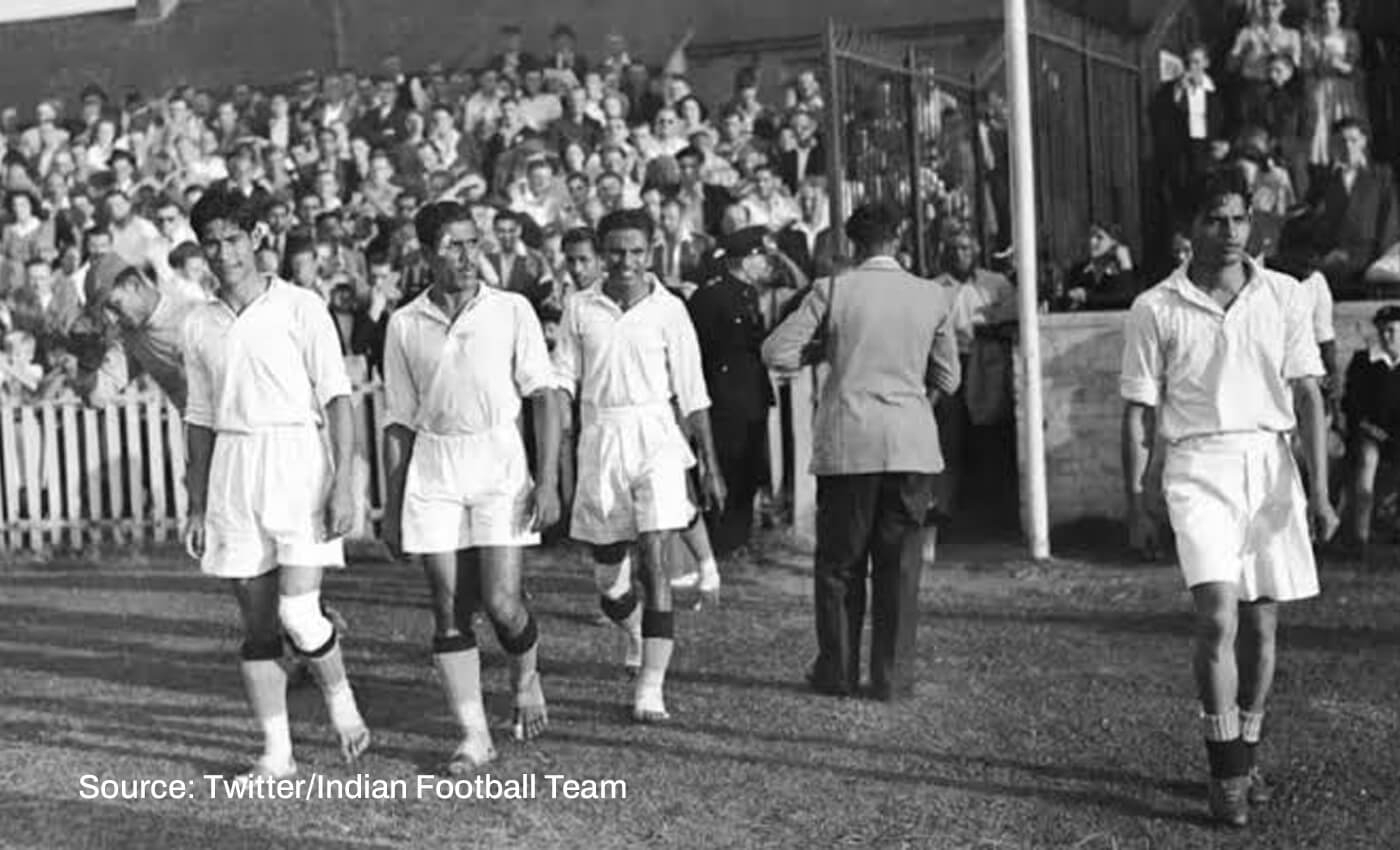 The football team did play barefoot in the 1948 Olympics because they preferred it, not because of a lack of government aid.

Social media users are sharing a photo of some sportspersons who aren’t wearing shoes – just socks – entering the field, claiming that it shows the Indian football team at the 1948 London Olympics. The viral posts claim that the footballers are wearing only socks because the government did not provide financial support to them. The claim has circulated since 2021 in both English and Hindi. Both versions remark that India could not afford shoes for the team when Prime Minister Jawaharlal Nehru's clothes were flown in by special planes.

While the photo is indeed of the Indian football team, it is being shared with a misleading claim. On conducting a reverse search on the image, we came across a report by sports news publication Sportskeeda, which carried the photo and said it was from the 1948 London Olympics, specifically from India's match against France in Ilford, London. A report from August 2018 in The Hindu's Sportstar said that the Indian team had football boots provided by the All India Football Federation (AIFF). It added they preferred not to wear them except when muddy conditions prevailed on the ground, forcing them to wear shoes. Instead, they wore thick socks cut off at the ankle and strapped up their feet to provide grip. According to another report on Olympics.com, word of the match spread around since barefoot gameplay was unseen. This report also stated that eight of the starting eleven played without shoes.

Further research led us to another news report by Sportstar from May 2014 titled 'Braving it barefoot,' which stated that having nurtured their talent without shoes, most Indian footballers at that time preferred playing barefoot. The report quoted the team's trainer BD Chatterjee saying that they did carry shoes to wear in case the need arose. The same article quoted a supporter of the Metropolitan Police – who the Indian team beat in a friendly ahead of the match against France – who said that the players were better without shoes than the opposing team in boots.

We also found mentions of the team's barefoot prowess in a book about India's sporting history, which contests the narrative that the players were bootless because India could not afford it. Kaushik Bandhopadhyay, in his book "Sport, Culture and Nation: Perspectives from Indian Football and South Asian Cricket," quotes sports commentator Berry Sarbadhikari, praised India's barefooted performance at a match in Frandce. He then writes that playing barefoot was a style and tactic. However, this would eventually lead to a heavy loss at the 1952 Olympics to the Yugoslavian team, which made the AIFF realize that this kind of playing was outdated. He also quotes sports historian Jaydeep Basu, who writes that barefooted football was the officially encouraged approach to the game at the time of the 1948 Olympics.

We also got in touch with sports historian Chandresh Narayanan, author of "Journey of a Nation: 75 years of Indian Sports," who confirmed that playing barefoot was the preference of the Indian team. "This myth has been going around for a while, but it is true that they preferred playing barefoot," he said.

Therefore, it is clear that there is no truth to the claim that the Indian team was playing barefoot because of a lack of funds. In reality, it is because they chose to do so. In fact, the team played so well barefoot that they nearly beat a more superior French side at the Olympics, ending the match losing 2-1 but making an impression on many. So captivating was their performance that reports say that King George VI even invited the team to Buckingham Palace after the match. The 1948 Olympics team's captain Talimeren Ao is also on record, saying, "Well, you see, we play football in India, whereas you play bootball!"

A picture of the Indian football team at the 1948 Olympics is being shared with the false narrative that they were forced to play barefoot because India could not afford boots for them. However, they played barefoot because they preferred to and chose not to wear the boots they were provided. Hence, we have marked this claim misleading.