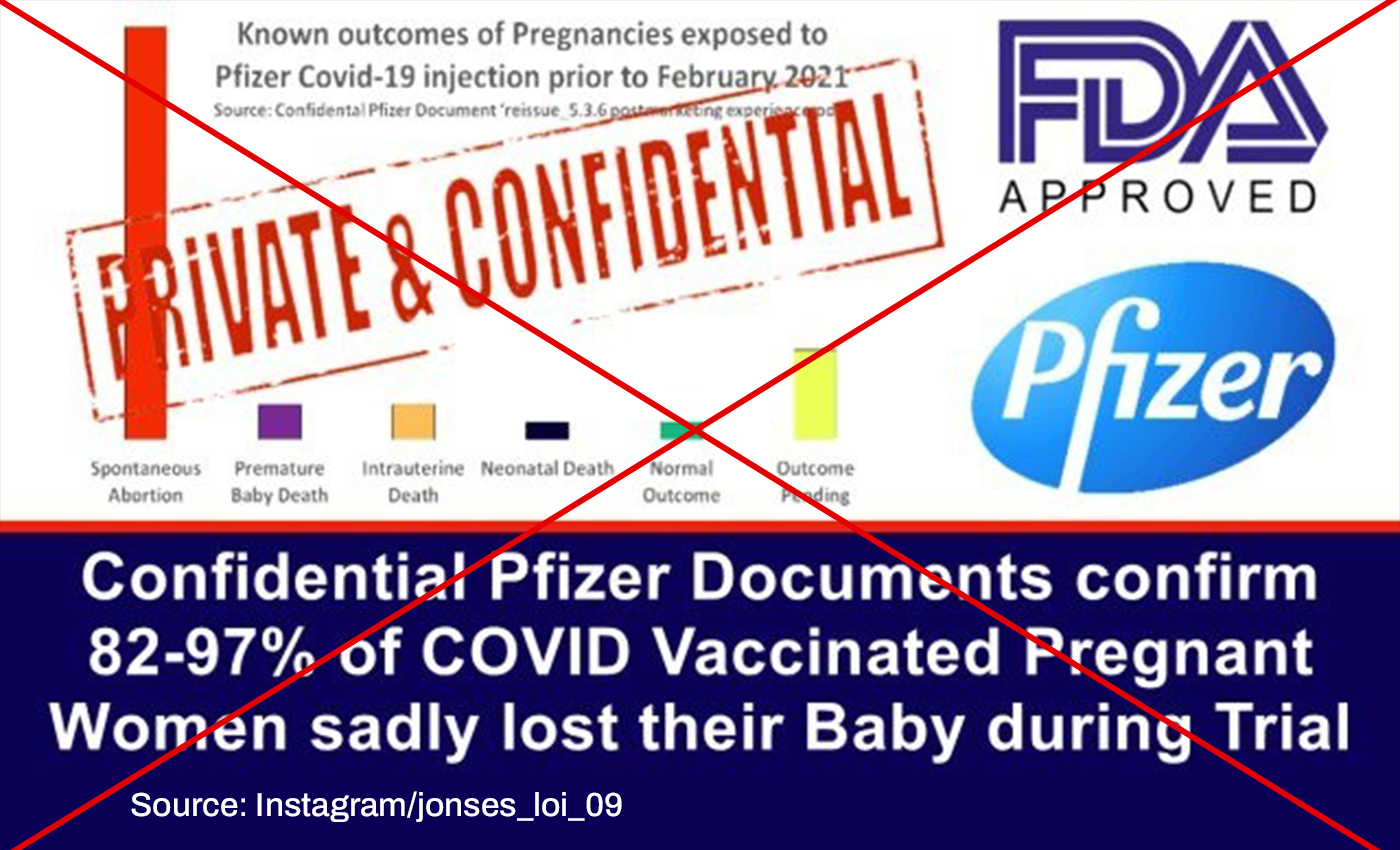 Faulty calculations were used to compute the percentage 82-97 to imply that expectant mothers lost their babies after receiving the Pfizer shot.

The medical misinformation and conspiracy blog The Expose, formerly The Daily Expose, claimed that pregnant women who received the Pfizer vaccine had miscarriages at a much higher rate than unvaccinated women. The post claimed, ''A confidential Pfizer documents confirm 82-97 percent of COVID vaccinated pregnant women sadly lost their babies during the trial.'' A bar graph showing the "known outcomes of pregnancies exposed to Pfizer COVID-19 injection before February 2021" was included in the screenshot of the post. The bar graph showed a very high rate of spontaneous abortions. This claim was picked up and repeated on social media by a number of accounts. The claim however is false, as it completely misrepresents a report from Pfizer.

Vaccines go through a rigorous testing procedure during and prior to development, and after they are confirmed to be safe, they are continually monitored for safety after they are released. These online concerns about the Pfizer COVID-19 shots in pregnant women were prompted and based on a Pfizer-BioNTech study that was produced as part of their normal safety monitoring.

This study investigated adverse event reports from 63 countries between December 1, 2020, and February 28, 2021. The data lists 270 documented pregnancies involving immunizations; of those pregnancies, 238 did not have any outcomes recorded. Information on adverse consequences or other events was only reported for 34 pregnancies. In this group, 28 mothers reported spontaneous abortion or neonatal deaths; five said the outcome was pending, and one reported a normal result. The figure of 82 percent comes from the 28 mothers out of the 34 who had recorded outcomes.

There are several problems with this figure. The first is that this is not an actual measurement of how many people had adverse reactions following a vaccination – as all of the data were self-reported, and as the majority of the patients did not report an outcome, it is not conclusive. Secondly, the cohort is much too small to be able to draw definitive conclusions. Third, adverse reactions that happen after vaccination are not by any means caused by vaccination – the cause of these miscarriage is not vaccines, and there is no reason to suspect that vaccination caused the miscarriage, as there is no mechanism by which the vaccine could do that.

Dr. Laura Morris, co-chair of the University of Missouri health care system's COVID-19 and influenza vaccine committee, spoke to the Associated Press about the miscalculated rates and said, "This takes data from the Pfizer document completely out of context." The study concludes that the findings are completely in line with expected results, and that there is nothing unusual or worrying about these data.

Furthermore, the Medicines and Healthcare products Regulatory Agency (MHRA) in the U.K. regularly track the safety of COVID-19 vaccination during pregnancy, taking into account publicly available data and Yellow Card reports. It mentions that the currently recommended vaccines for use during pregnancy, Pfizer-BioNTech and Moderna, can be administered at any stage of pregnancy. According to the evidence, immunization in later pregnancy does not appear to increase the risk of pregnancy problems, stillbirths, preterm deliveries, or unfavorable neonatal outcomes. Logically has previously checked a claim that the COVID-19 vaccines are safe for pregnant women.

The Expose has a documented history of manipulating, misrepresenting, and distorting official sources of information so that their false and misleading claims appear legitimate. Logically has been reporting and tracking on their activity since early 2021.

The Pfizer document's data does not list the total number of pregnant women who had the vaccination over the two months. Therefore it is unable to compute the overall prevalence of specific adverse occurrences. Furthermore, the list of adverse events associated with the vaccine is based on voluntary reports, which do not indicate that the vaccine caused the adverse event and thus cannot be used to prove the vaccine is dangerous. The erroneous computation misrepresents the data to show that 82-97 percent of pregnant women who received the Pfizer COVID-19 vaccine lost their babies; hence we mark the claim as false.