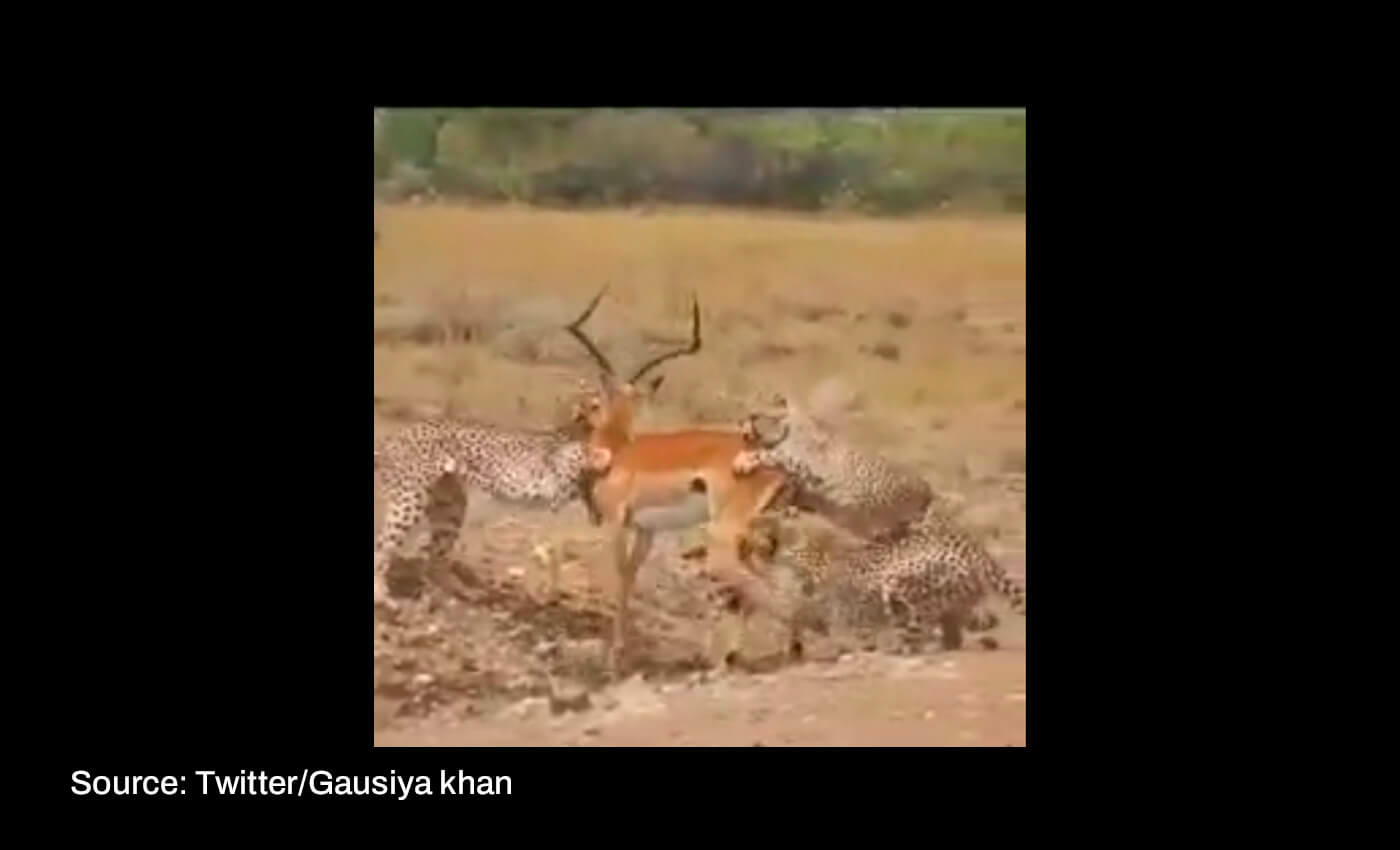 An old video of cheetahs hunting an impala in Kenya is being shared to claim that Namibian cheetahs have killed 200 deers at Kuno National Park.

Eight cheetahs were brought from Namibia and released in Madhya Pradesh's Kuno National Park on September 17, 2022. Since then, pictures and videos of these feral cats have gone viral on social media. In the above context, a viral video of three cheetahs killing an impala is being circulated along with a narrative that recently released Namibian cheetahs are attacking a deer. The English translation of one Twitter post, which included the viral video, said, ''Where are those fake animal lovers who come before Bakra Eid and shout everywhere, look here 200 deer were put to death.'' The post notes that Salman Khan faced massive criticism for allegedly killing black bucks and questions whether there are no laws for wildlife now. The words "Namibian cheetah" and "Indian deer" were included in the English translation of the Hindi text over the video, which claimed that an innocent animal had been deliberately offered to the cheetahs. Several similar posts claimed that deers from a different state were brought to Kuno National Park so the new cheetahs could hunt them.

With a reverse image search on one of the video's keyframes, we found the extended version of it on the YouTube channel "Lemurt Wildlife." The video is titled, "Kisaru one of the senior matriarch in the Mara ecosystem with her cubs killed an impala." A shorter version of the same video is available on its Facebook page. According to the geotag, the video is from Kenya, not India. The description says the attack occurred on an impala, not a deer, as the posts claimed. The video was uploaded on August 17, precisely one month before the cheetahs from Namibia were brought to India.

Under Project Cheetah, the world's first intercontinental large wild carnivore translocation project, wild Cheetahs, which had gone extinct in India, were introduced to Kuno National Park in September 2022. The Press Information Bureau states, ''the release of wild Cheetahs by the Prime Minister in Kuno National Park is part of his efforts to revitalize and diversify India's wildlife and its habitat.''

Some social media posts alleged that deers were brought to Kuno National Park from various states so the new cheetahs could hunt them. So, we conducted a keyword search connected to the release of deers in the national park as prey for the cheetahs. We found a tweet from the Madhya Pradesh Forest department posted on September 21, 2022. The English translation of the Hindi text stated that the Kuno National Park is home to many chitals (a kind of deer native to the Indian continent). It also mentioned that no chital had been brought to the wildlife park.

In the Hindu report dated September 20, Jasbir Singh Chauhan, the Chief Wildlife Warden for Madhya Pradesh, claims that the state had many wildlife parks with considerable chitals and clarified that no chital was introduced to Kuno National Park as cheetahs' prey. This statement was in response to the Bishnoi community's protests following reports that chitals had been relocated from Rajasthan to Kuno National Park to provide food for Namibian cheetahs. He also stated that chitals were relocated so that they wouldn't graze on harvested crops and harm the livelihood of the people living nearby. He further clarified that, in contrast to claims that the relocations are carried out to provide the cheetah's prey, the primary objective of any chital relocation is to improve the animals' access to food and water.

The viral Twitter post claimed 200 deers were killed in the first three weeks after the cheetahs were released in the national park. Yet, the assertion is unfounded, and no official reports corroborate such statistical estimates. The viral post also raised concerns about the status of law and order by linking the actor Salman Khan's decades-old blackbuck poaching case and insinuating that 200 deers were killed in this case. While specific Indian laws or ordinances address the protection of wild animals, the post's purpose is malicious and aims to provoke the public against the government.

To summarize, an old video of cheetahs killing an impala in Kenya is being falsely shared as Namibian cheetahs killing a deer at Kuno National Park. The Madhya Pradesh Forest Department has disputed rumors that chital was moved to Kuno National Park for predation by newly arrived cheetahs. The assertion that approximately 200 deers were killed in less than three weeks after the cheetahs arrived in the national park is also unfounded. Hence, the claims made in the Twitter post are false.