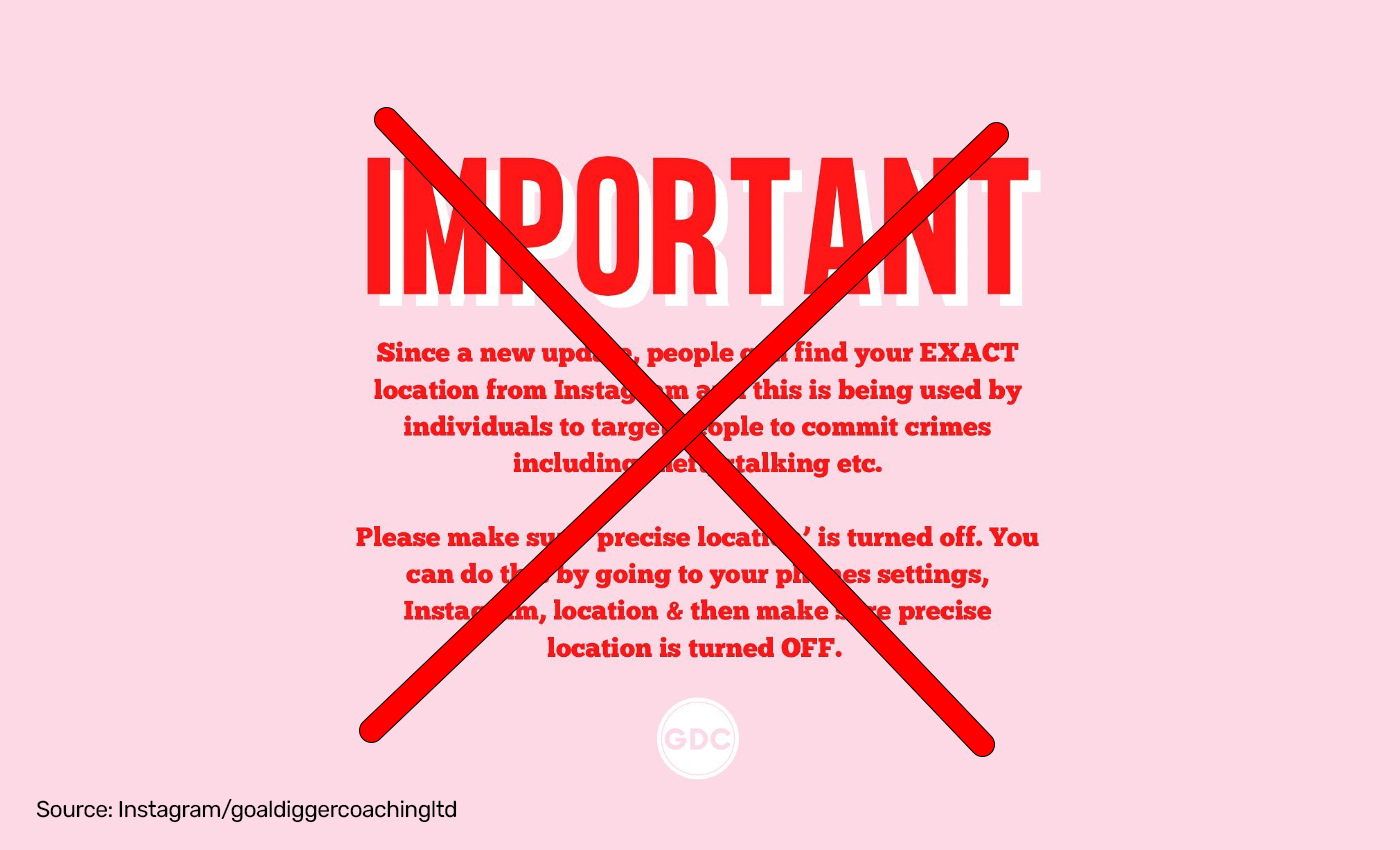 Instagram does not track or share its users' locations without their consent. Users can turn off the precise location setting on their devices.

A recent viral Instagram post claims that the social platform’s new update can track a person's exact location which is "being used by individuals to target people to commit crimes including theft, stalking etc." BBC reported that Apple's iOS 14 in 2020 and Android 12 in 2021 showed the location update in the app. "It gives users the option to provide some apps with a more accurate location," the report stated. This update was met with criticism also leading to some misinformation being spread about privacy policies of social media platforms. There are no figures or data used to back this claim. Similar posts are also shared on Twitter and Facebook.

According to Instagram's privacy policy, the company uses location-related information to detect suspicious activity, marketing purposes, and security. The policy states that they use IP addresses to estimate the general location for posts, check-in, and events. There is no mention of Instagram publishing this data for criminal purposes.

The location setting on Apple devices is automatically enabled once permission is given to access the user's location and can be turned off the by the users as they wish. In a report published two days ago, BBC reported that only an approximate location would be identified and used for apps where the precise location is turned off.

On August 26, 2022, Adam Mosseri, head of Instagram in a tweeted clarified, "Location Services is a device setting on your phone, not a new feature from Instagram, and it powers things like location tags. We don't share your location with other people." The Instagram Communications team tweeted the same day, "To be clear, we don't share your location with others. Similar to other social media companies, we use precise location for things like location tags and map features."

On August 27, 2022, CBS Mornings, the breakfast television program, showed Instagram users how they could turn off the "precise location" option on Apple devices by going to their location settings for the app and turning it off.

In 2018, Instagram’s sister organization Facebook was accused of allowing third-party Cambridge Analytica to harvest the data of tens of millions of users in an expose made by the Observer. Facebook chief executive Mark Zuckerberg had to testify before the United States Congress and the social media giant was made to pay a multi-billion pound fine. Very recently, its parent organization Meta settled a lawsuit seeking damages for the data breach. However, Instagram has categorically denied sharing user’s data on location in response to the fresh set of allegations.

Over the years, Logically and several other fact-checking orgnizations have previously debunked unverified claims about Facebook and Instagram sharing users' content without consent. These kinds of claims pop up often when there is a new social media policy update.

A user's location is shown only if they turn on their location for a specific mobile application. The precise location setting can be turned off, and the approximate location will only be shown if the user wants to tag a place. According to the company, Instagram has the location information only for check-ins and security purposes and is not shared with others. Hence, we have marked this claim as misleading.

Instagram has changed its algorithm that allows only around seven percent of a user's followers to see a post.