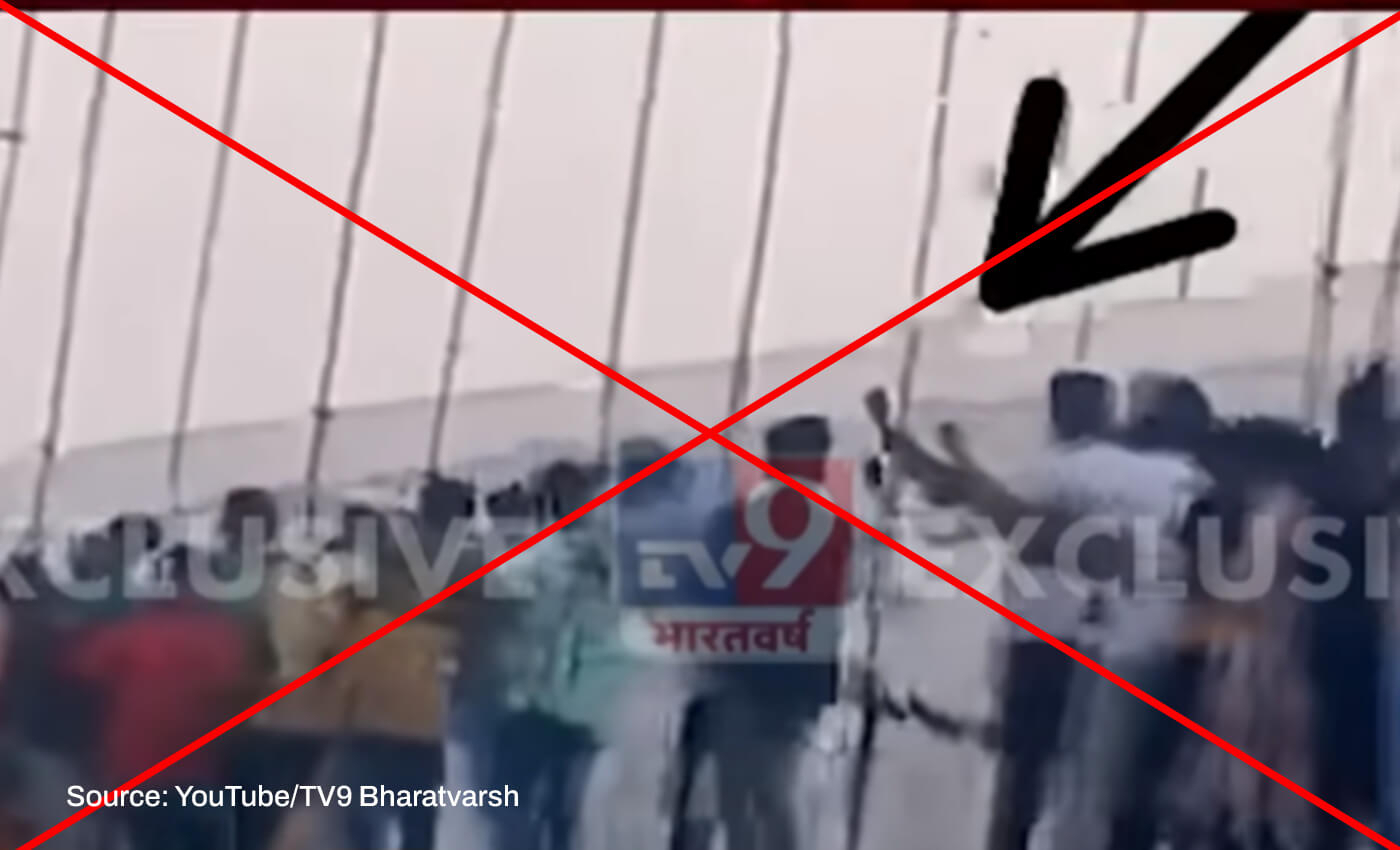 The viral video showing people shaking the Morbi bridge was not shot right before the collapse of the bridge.

At least 133 have died, and at least 93 suffered injuries due to a bridge collapse in Morbi, Gujarat, on October 30. The bridge was closed for renovation and reopened a few days ago. A video is making the rounds on social media with the claim that the bridge collapsed because people were jumping and shaking the Morbi cable bridge. The 30-second clip shows a bridge shaking with a massive crowd. The river below the bridge is covered with green plants.

This video was aired during programmes on the incident on October 30 by several news channels, including Republic Bharat, ABP News, and TV9 Bharatvarsh, along with claims that it showed what happened on the day in the build-up to the collapse of the bridge. The clips from these shows were still available on YouTube channels of these channels as of 7:27 pm IST on November 3 and had also been reported by other news organizations, which have subsequently amended their articles.

There were a number of social media posts with high engagement which shared the video, claiming that it was from "before” the collapse. Viewed in context, they also appeared to suggest to a reasonable viewer that the footage came from the same day and shortly before the collapse.

Actual CCTV footage from the bridge at the moment of its collapse began to be circulated in the morning of October 31. One of the earliest posts on Twitter showing the footage came from Zee News reporter Pooja Mehta. In the footage, which is timestamped at 6:31 pm IST on October 30, a group of youths can be seen standing on the bridge moments before it collapses.

In a recent report, The Lallantop interviewed Ronak Maniar, who visited the Morbi bridge just two hours before it collapsed. Maniar visited the bridge on October 30 at 4 pm IST, when he shot a few visuals of the newly renovated bridge and shared a reel on social media. A few visuals of his visit were included in the video report. The river water under the bridge in these visuals also looks clear and does not have any vegetation cover, in contrast with the viral video.

As a result, it can reasonably be concluded that the scenes in the viral video were not captured shortly before the collapse of the bridge, in contrast with the express claims by some news channels, and suggestions by social media posts.

Morbi police have lodged a criminal case against the bridge management under sections 304 and 308 (culpable homicide not amounting to murder) of the Indian Penal Code (IPC). "Nearly 250-300 people were on the bridge when it collapsed. The suspension bridge collapsed due to mechanical failure or any other reason due to lack of proper repair, maintenance or management and that the persons/agencies carrying out the repair and maintenance and management of this bridge have not properly repaired/maintained and checked the quality of the bridge with due care," reads the FIR, according to the Indian Express. It also said the accused will be revealed after further investigation. Police have not made any statement on the Morbi Bridge collapse being a pre-planned conspiracy.

The Economic Times reported that a case had been registered, and the deputy superintendent of police will investigate the incident.

The evidence above proves that the viral video is not from the build-up and the moments before the collapse of the Morbi bridge on the evening of October 30. Therefore, we have marked this claim as false.

This fact check has been amended to correct a previous assertion that the video in question matches an old video from 2018. While it can be reasonably concluded that the video is not from the day of the bridge collapse, its exact date cannot be conclusively ascertained. However, the claims regarding the viral video, made during programmes broadcast on TV channels on October 30 and in social media posts, remain false.