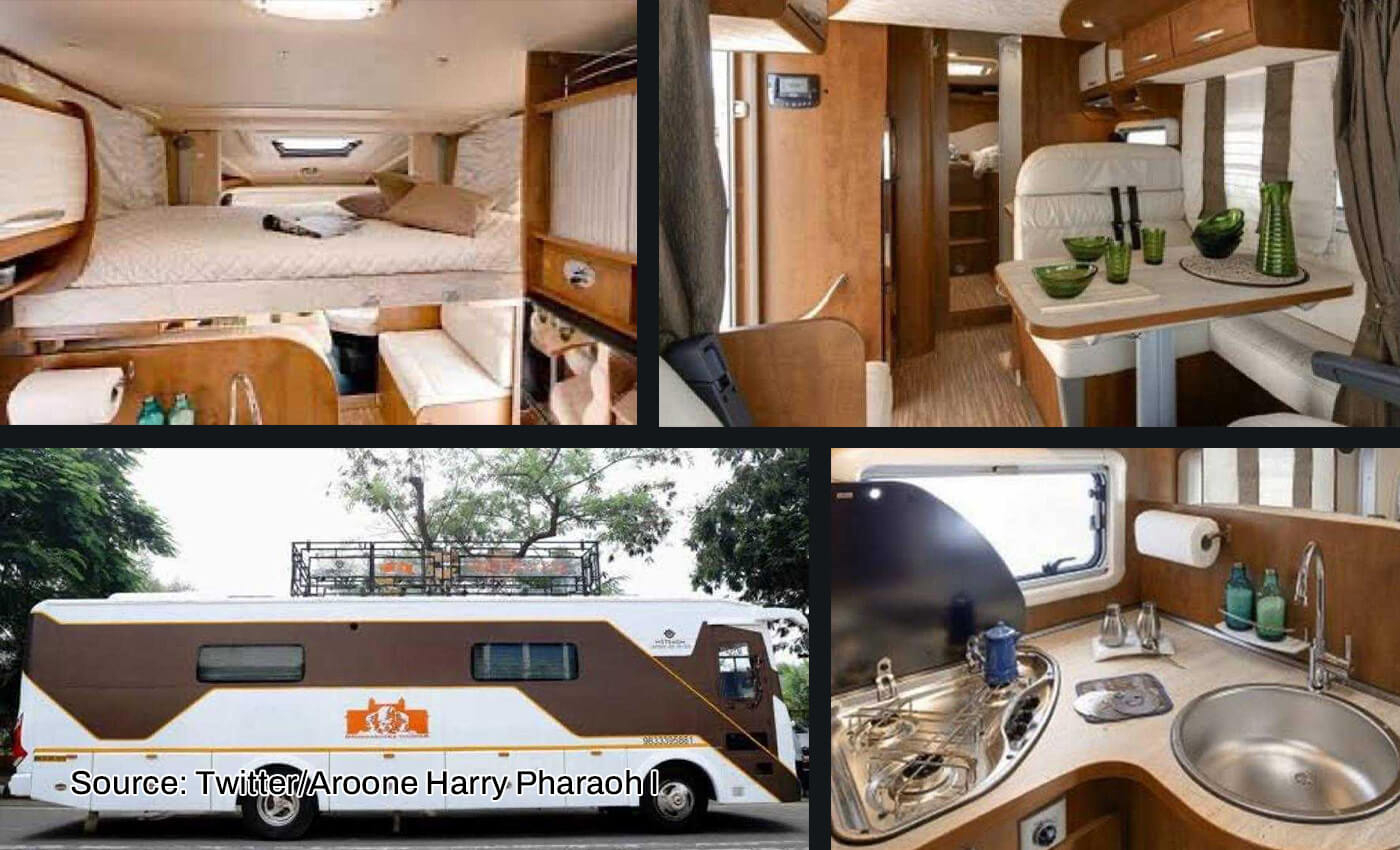 Though photos in the post are misattributed, some containers used in the Yatra do have ACs. However, amenities like TV and barbecue are not included.

As the Indian National Congress pins its hopes on the ‘Bharat Jodo Yatra’ to rally its ranks before the upcoming elections, several narratives have surfaced over the campaign across social media platforms. Several posts on WhatsApp, Facebook, and Twitter assert that Congress party members and others are spending their nights in luxury containers with all sorts of fancy facilities. A message forwarded on WhatsApp included the alleged images of the containers' luxury interiors, such as a kitchenette, bunk beds, small dining spaces, apart from a cupboard and cabinets. It also included an image of what appears to be a bus or recreational vehicle (RV). The Hindi text circulating with the images reads, "80 air-conditioned containers will accompany Rahul Gandhi in his India Jodo Yatra. Rahul Gandhi and all other big leaders will have fun in these air-conditioned rooms, with all the facilities inside. Everything from barbecues to TV and the internet is free. The yatra itself would be a gimmick in between this."

A team of Congress leaders including Rahul Gandhi is marching from Kanyakumari to Kashmir as part of the Bharat Jodo Yatra which began on September 7, 2022. According to NDTV, all the some 230 people and leaders are spending their nights in a total of 60 containers mounted on trucks that are moved from one place to another as the yatra continues. Some containers are two-bedded, while some can hold six to twelve people. However, the images in the viral post are unrelated to this march and are not of the container trucks.

With a reverse image search, we found the exact same images posted on Zig Wheels, an automotive website hosted in India. The photos date back to 2013, when JCBL partnered with PLA company and introduced a luxury van, the HS75 premium motorhome. There are 11 images of the motorhome on the Zig Wheels website, of which eight are precisely the same pictures as seen in the viral WhatsApp message. The image of the van spotted in some of the other viral posts was also found on Overdrive, an Indian media outletthat focuses on automobiles. The Overdrive article, published in 2020, includes several luxury vans available in India. One of the images in question is used in this article, which is captioned, "This MTDC Motorhome is rented with a driver and attendant and can accommodate four to five guests." Evidently, these images are old and not related to the recent yatra.

Further, upon researching if all the containers had been air-conditioned, NDTV reported on September 9, 2022, that the "52-year-old MP (Rahul Gandhi) has one of the air-conditioned containers to himself, others will be sharing. Senior leaders are housed in two-bedded containers and others yatris in six or 12-bedded ones. Not all containers have ACs, but most have attached toilets." On September 10, News18 reported that the container in which Rahul Gandhi is staying has one bed, a small sofa, an air conditioner, a small refrigerator, and an attached toilet. Some of the containers have attached bathrooms, while some don't. It quoted Congress leaders stating that the participants were staying in containers which have very basic and minimal facilities. They further claimed that the BJP IT cell was spreading falsehoods about the facilities at the yatra.

From the video on Twitter posted by INC TV, the official media platform of Congress, we could spot air conditioners inside the containers. Although some containers have installed air conditioners (AC), not all of them have this facility. None of the recent news reports indicated the availability of any of the facilities like internet, TV, and barbecues in the containers.

Although some of the containers being used for the Bharat Jodo Yatra are air-conditioned, not all the containers include the facility. Amenities like the internet, TV, and barbeques are missing from the containers and are made-up features in the viral posts about the yatra. Hence, we have marked this claim as partly true.