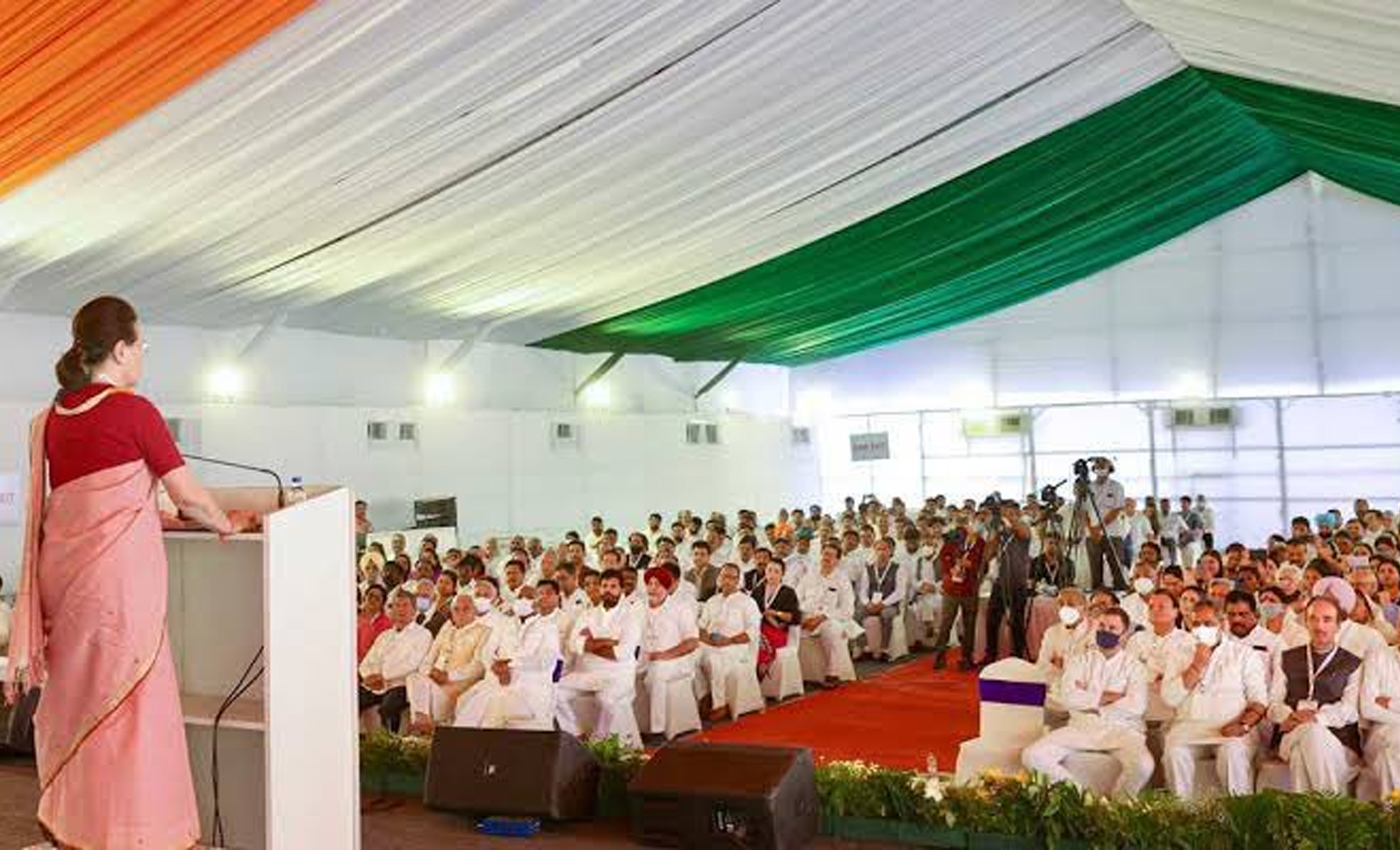 All three colors of Congress' flag – saffron, white, and green – were used to set the pandal's ceiling for its Chintan Shivir meeting.

Between May 13 and 15, 2022, the Indian National Congress party held its three-day Chintan Shivir in Udaipur, Rajasthan. The three-day brainstorming meeting in Udaipur focused on strengthening core areas of the Congress party. It was attended by prominent Congress members, including interim president Sonia Gandhi and Rahul Gandhi. A photograph from the session that showed leaders sitting at a table was widely shared on social media, with allegations that the Congress party had covered the tent's canopy in the green and white colors of the Pakistani national flag. Many social media users and far-right groups chastised the party for using the Pakistani flag as roofing. However, the claims are false since the viral image merely depicted a part of the tent's ceiling, not the complete shelter that included the saffron colors. Contrary to the claims, we found several images from the event demonstrating that the ceiling was made up of the three colors including saffron, and not just green and white as claimed by some social media users. Congress' flag also consists of all these three colors with an emblem of an open palm at the center. Thus, it would be inappropriate to say that the event had anything to do with a country's flag. On May 13, one of Congress' Twitter posts contained three images captured at the opening of Chintan Shivir. In the first photograph of Sonia addressing the presiders, the ceiling comprises the Indian tricolor. On May 15, Congress posted a video related to Chintan Shivir’s message. The video's thumbnail depicted Sonia addressing the gathering with the tricolor ceiling and the text "The Nav Sankalp of Bharat Jodo." We found that the viral photograph incorrectly labeled by users online was one of four images posted on Twitter on May 14 by Rohan Gupta, the chairperson of Congress' social media committee. The third photograph in Rohan's tweet shows the whole tent ceiling, decked with three colors. Nevertheless, only the fourth image, which depicted a portion of the top in green and white shades, was used to disseminate misleading information. The Congress party made several critical decisions and enacted resolutions to restructure the party during the Chintan Shivir in preparation for the next round of assembly and Lok Sabha elections. Following a final round of discussions on significant issues such as politics, economics, agriculture, social justice, and youth matters, the Congress Working Committee (CWC), the party's highest decision-making body, approved a new roadmap. The narrative that the Congress party endorsed the colors of the Pakistani national flag was propagated using an image taken from the event that showed only a part of the ceiling. These false narratives are likely politically motivated and were found to be propagated by some far-right affiliates. Hence we mark this claim as false.