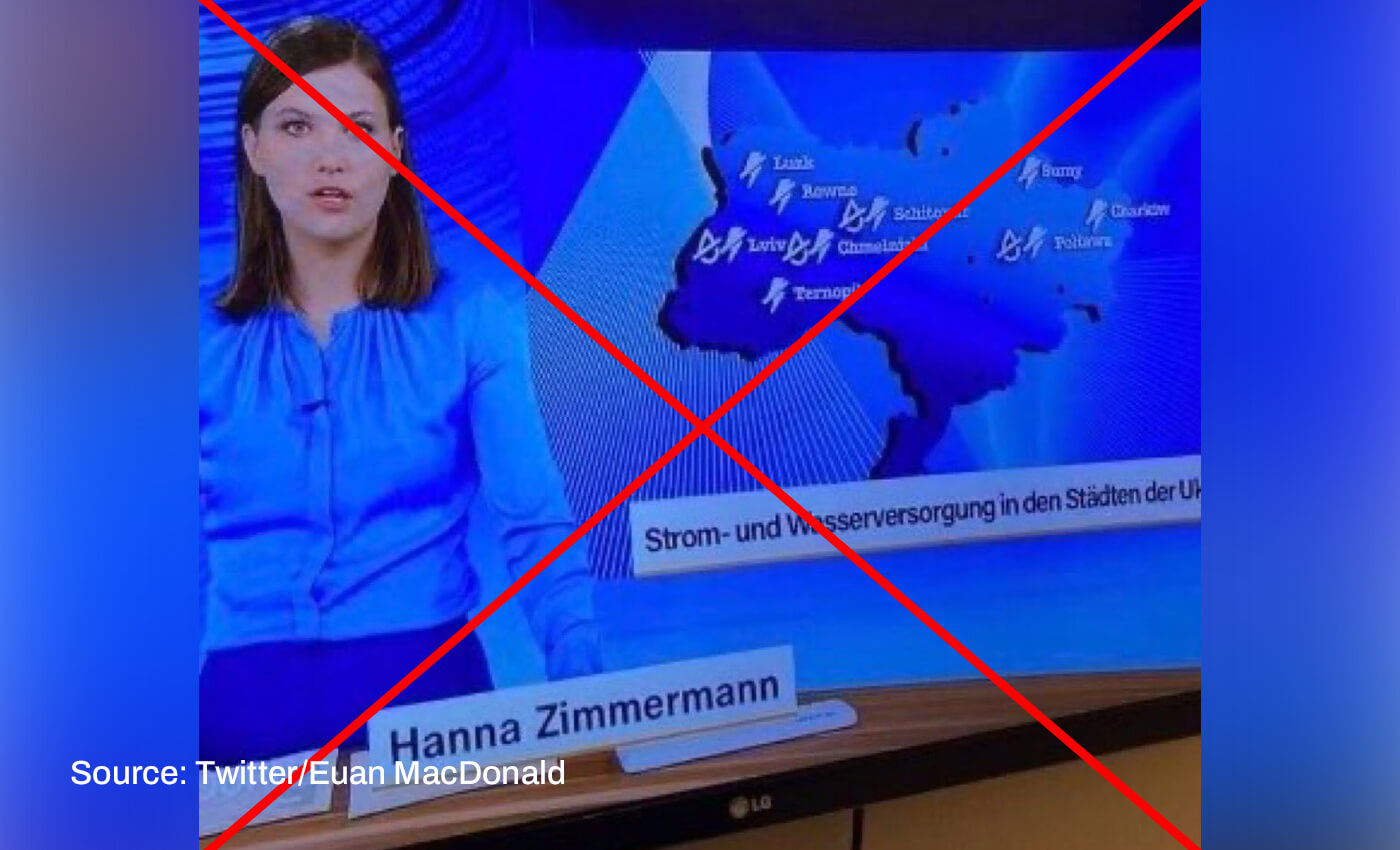 The screenshot of the broadcast has been altered. The ZDF broadcast in question did not use this map of Ukraine and the original image was unrelated.

A screenshot taken from a German news television broadcast purportedly showing a map of Ukraine without the four regions Russia announced it had annexed recently is going viral on social media. The post was shared with the claim that the public broadcaster, ZDF, left the regions under conflict off the map, showing that Germany is now moving towards recognizing Russia's annexation. The screenshot shows anchor Hanna Zimmermann and an image of the map on a screen behind her. A line of text within the photo says, "Electricity and water supply in the cities of Ukraine." The photo also carries the branding of Heute Journal, the network's television news magazine. The post was shared by several people on both Twitter and Facebook.

We found that the viral screenshot has been digitally altered, and no such map of Ukraine without the regions of Luhansk, Donetsk, Zaporizhzhia, and Kherson was displayed by the ZDF.

A tweet by ZDF on their official twitter handle called the photo manipulated, and stated that the was fake news. Saying that they had never broadcasted this map, ZDF specified that it was an edited screenshot of the October 10 edition of Heute Journal, attaching both the viral photo and a screenshot of the original broadcast. The photo of their broadcast supplied by ZDF showed a photo of a plaque of the Attorney General at the Federal Court of Justice. Below it, text in German says, "Investigation into leaks in gas pipelines." ZDF also added a link to their October 10 broadcast, inviting people to see it for themselves.

We also checked the entire broadcast linked by ZDF and found that most of the 24-minute-long show consisted of other visuals. Of those showing the anchors on screen, we found one clip at the approximately 12-minute mark that matched the moment captured by the screen grab. In that, Zimmermann can be seen in the same position and in the same attire as in the viral photo. The image behind her is of the plaque mentioned before, not a map of Ukraine. While one of the topics dealt with in the broadcast was Ukraine and Russia, we checked the entire video and found no such map on the screen.

Further, Zimmermann herself took to Twitter to refute such claims shared by people, stating that the image is manipulated and ZDF never broadcasted such a map. She, too, attached a link to the full episode.

This claim comes in the aftermath of Russia declaring that it is annexing four regions of Ukraine - Donetsk, Luhansk, Zaporizhzhia, and Kherson. According to a report by BBC from October 5, Russian President Vladimir Putin has signed the final papers to annex the regions partially or fully occupied by Russia and accept them into the Russian Federation. On September 30, Putin held a grand ceremony in the Kremlin to sign agreements with leaders of the four regions that Moscow has installed. This comes after Russia held self-proclaimed referendums in the four regions between September 23 and 27, none of which reportedly had independent monitoring systems. Instead, BBC reported that armed guards accompanied election officials door-to-door as they chalked up the votes of residents of the regions. The West slammed the referendums as a sham, with the U.S. declaring it would impose more sanctions on Russia. Heavy fighting has continued in Ukraine as the country continues to push back against the Russian invasion. In the last week, Russia unleashed several deadly missile strikes across Ukraine, causing widespread devastation. The lethal strikes were seen as retaliation by Putin for an Ukrainian attack that severely damaged the Kerch Bridge, a critical route that links Russia to Crimea.

An altered photo of a news broadcast by a German television network is being used to claim that it is promoting a map of Ukraine without the four regions that Russia has declared it has annexed. The underlying insinuation here is that the network, ZDF, and Germany, by extension, is supporting and recognizing Russia's annexation of the areas. However, ZDF never broadcasted such a map, and an unrelated image has been edited to support this fake claim. We have marked this claim false.