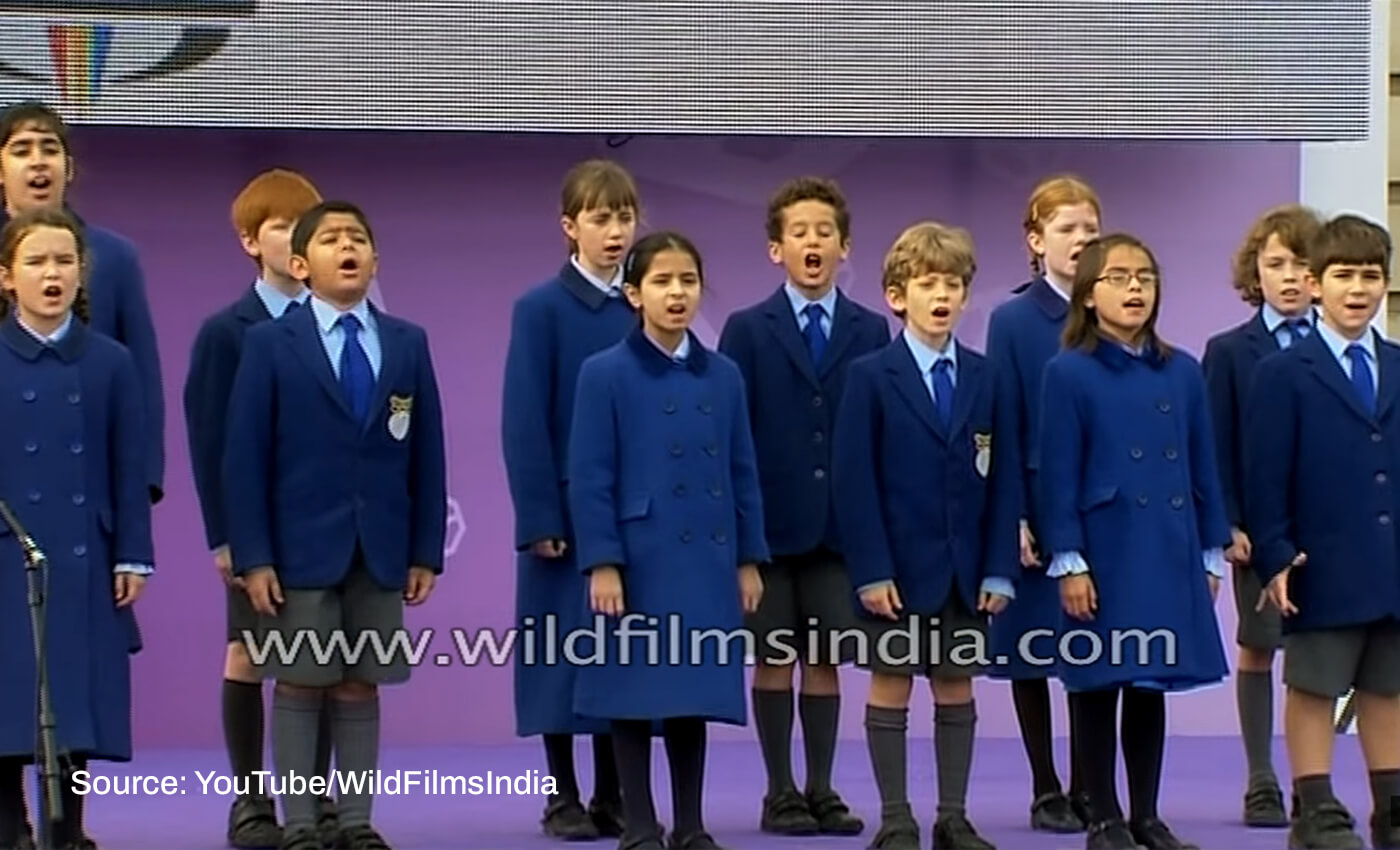 The video is from October 2009, when students chanted Sanskrit verses at the launch of Queen's Baton Relay ahead of the 2010 Commonwealth Games.

A video of a group of students chanting Sanskrit verses on a stage in front of Buckingham Palace is going viral in the aftermath of the death of Queen Elizabeth II, the longest serving monarch of the United Kingdom. The video is being shared to claim that Sanskrit verses were chanted as part of the mourning proceedings. Several people posted the video on both Facebook and Twitter with the caption: "Wow...This is superb. Especially when we were slaves to the Queen for 98 years, and now she is been bid farewell with our OM SHANTI HI....! So proud to be an Indian."

We noticed that stage in the viral video carries a board that clearly reads Commonwealth Games Delhi 2010. It also identifies the group of children performing as the St James School Choir. Taking a cue from this, we ran a search with related keywords and found the same video of the performance on YouTube, uploaded by a verified channel called WildFilmsIndia. Although the video was posted in May 2019, the caption explained that the choir performed outside the Buckingham Palace during the Commonwealth Games Queen's Baton 2010.

We then searched with more keywords relating to the Queen's Baton and the 2010 Commonwealth Games and found a news video uploaded by ABC News Australia on YouTube on October 30, 2009. This video captured the facade of Buckingham Palace as well as the children's school choir exiting the same stage as seen in the viral clip. Further, Queen Elizabeth II can be seen on stage, handing the baton to the then President of India, Pratibha Patil, who then hands it over to another man. The video clearly mentions that the event is the Queen's Baton 2010. Another group can then also be seen performing an Indian classical dance on the stage.

On checking for more news reports about the event, we came across a The Times of India article according to which the Queen's Baton Relay 2010 was kicked off at a ceremony held at Buckingham Palace, London, on October 29, 2009. According to the report, apart from the passing of the baton, the ceremony saw performances by students including a group chanting Sanskrit verses from the Rig Veda. The baton traveled around the Commonwealth of countries before it arrived in New Delhi for the start of the Commonwealth Games on October 3, 2010.

Aged 96 Queen Elizabeth II passed away on September 8, 2022, at Balmoral in Scotland after a reign of 70 years. She had been experiencing several health and mobility issues for several months, in addition to contracting COVID-10 earlier this year. The Queen's coffin left Balmoral Castle on September 11 and made its way to Edinburgh, where the people can see her her and pay their last respects to her. Her body will now be in the Bukingham Palace for four days. Her state funeral is expected to be held on September 19 ending the national period of mourning.

A video from 2009 of children chanting Sanskrit verses at an event held to launch the Queen's Baton Rally ahead of the 2010 Commonwealth Games is being shared with a false context .No Sanskrit shlokas have been chanted at any event associated with the mourning of the monarch's death. Therefore, we have marked this claim false.