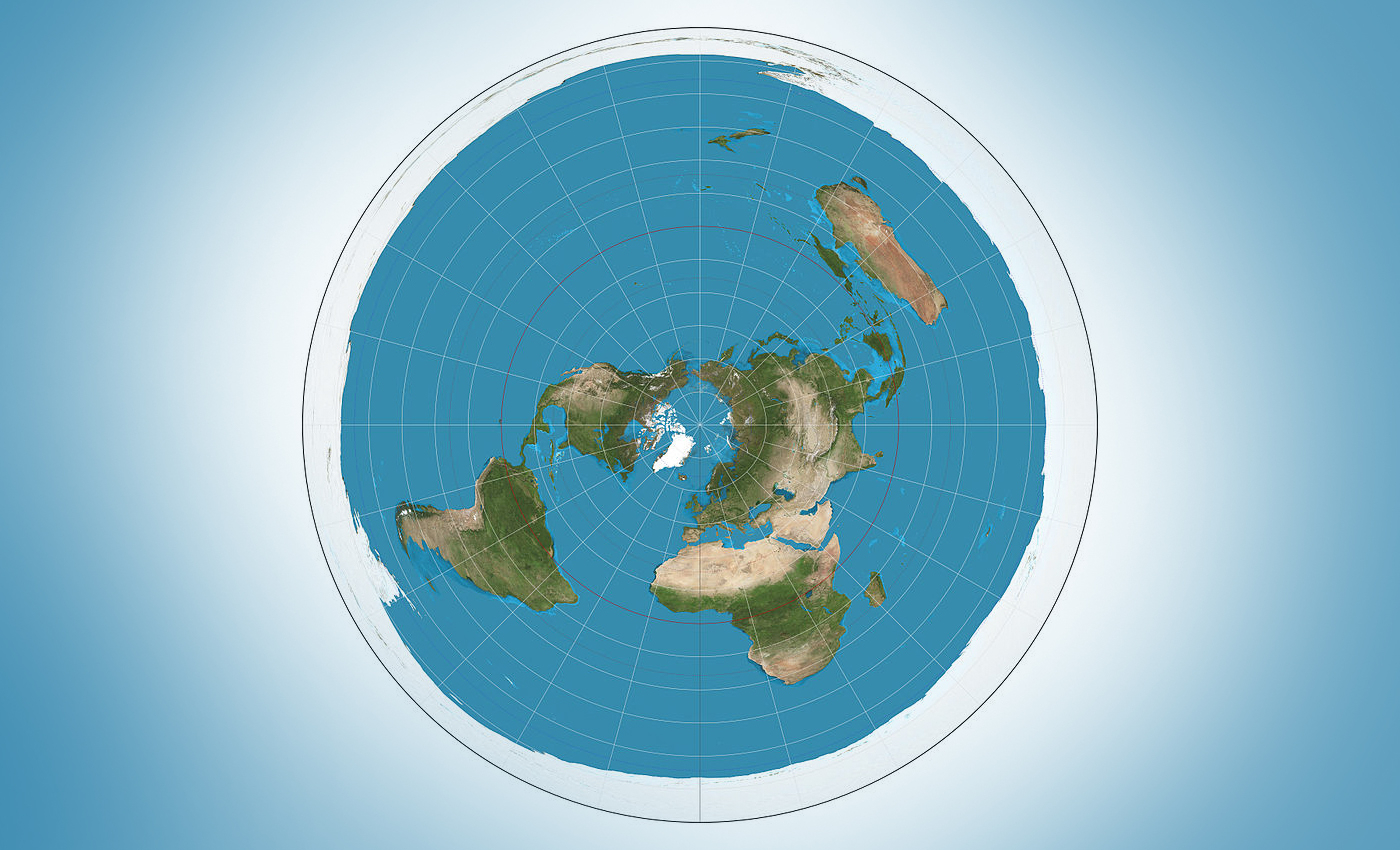 The Azimuthal Equidistant projection is helpful, but like all 2D maps, it creates distortions because the Earth is an oblate spheroid.

Conspiracy theorist Mark Sargent created a multi-part series of videos attempting to prove the discredited Flat Earth theory. He separates his theories into "clues" that supposedly prove that planet Earth is flat and that a secret group Sargent calls "The Authority" keeps this from the public. In part three of his series, Sargent focuses on a specific map projection used by the United States Geological Survey (USGS) called the Azimuthal Equidistant, similar to maps favored by Flat Earthers. In both versions of the map, there appears to be a wall of ice surrounding the continents. He cites a note on Wikipedia that the USGS uses it for an atlas of the United States. Sargent also points out that NASA named a crater on the moon after the 11th-century Persian scholar Al-Biruni, who created an Azimuthal Equidistant projection map of the planet. Sargent claims this is proof that Al-Biruni created a truly correct map of the Flat Earth. In addition, Sargent cites the logo of the United Nations (U.N.), which features the same projection. These are taken as clues that the USGS, NASA, and U.N. are aware that the Earth is flat. The Earth is an oblate spheroid that cannot be rendered accurately in any two-dimensional presentation. The Azimuthal Equidistant map does not depict the ice wall that some Flat Earthers believe encircles the flat world. It merely reflects the distortion of Antarctica that would occur when a map is based on one central point from which the rest of the map is projected outward, which in this case is the North Pole. If the map were projected from the South Pole instead, it would grossly distort the size of the other continents. The Flat Earth theory has been debunked countless times. As with his other videos, Sargent relies on speculation, pointing to supposed clues left by "The Authority". The USGS does use the Azimuthal Equidistant projection, as Sargent claims, along with many other types of maps, for a range of different purposes. The notion that any single map is "correct" is a misunderstanding of what maps are. As previously reported by Logically, all two-dimensional maps are, in their own way, "misinformation" due to the limitations of any attempt to accurately portray the Earth–an oblate spheroid–in a flat form. Different map projections have different accuracies and are used in different ways. According to the USGS, the Azimuthal Equidistant map helps show "airline distances from [the] center point of the projection." It is useful for radio, aviation, and seismic mapping, and illustrates polar hemispheres. The Mercator projection is used when mapping equatorial areas, and the Sinusoidal Equal Area projection better represents large landmasses that stretch North to South, such as Africa. All in all, there are 18 map projections cited by USGS in its report on map projections. The Azimuthal Equidistant projection is the map projection used for the logo of the United Nations. Though Sargent claims this choice is a clue that the Earth is flat, the decision by the U.N was more likely an aesthetic one based on practicality, as it includes the inhabited continents of the world in one image. The U.N.'s use of this map projection does not prove that they know the Earth is flat. Map projections are all inaccurate to some degree. The legitimate uses of the Azimuthal Equidistant projection do not prove the Earth is flat.