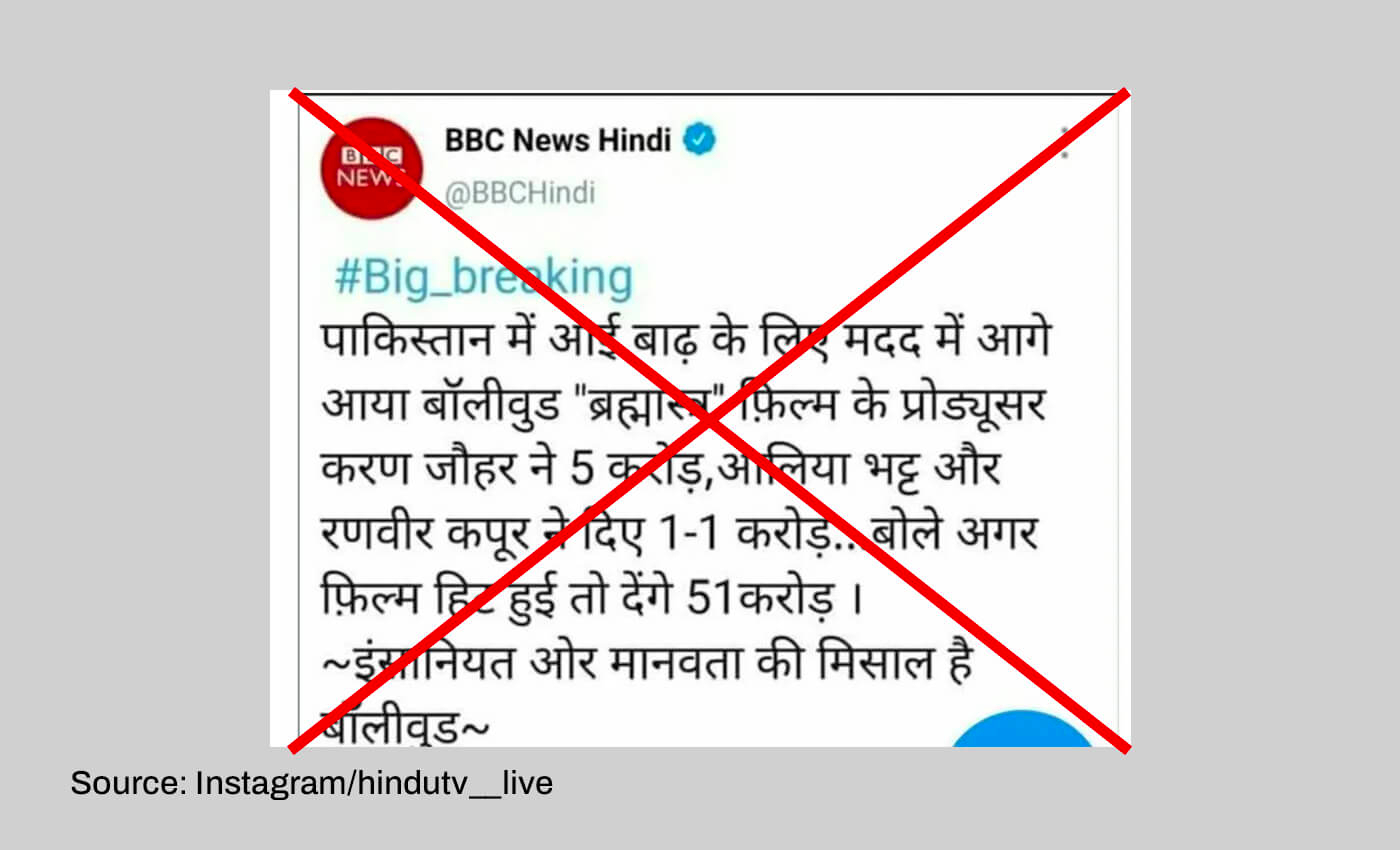 BBC News Hindi has clarified that the tweet being populated on social media is fake and has not been made from their account.

A screengrab of a tweet claiming that Bollywood director Karan Johar and actors Alia Bhat and Ranbir Kapoor have made enormous donations for flood victims in Pakistan is being populated on social media. The screenshot has the logo of BBC News Hindi. It reads, "Bhramastra film

producer Karan Johar has come forward to provide aid worth Rs 5 crores for the flood victims in Pakistan." It further reads, "Both Alia Bhatt and Ranbir Kapoor have donated one crore each and have announced an aid worth Rs 51 crores if their film does well". It concludes that "Bollywood is an epitome of humanity." An Instagram account called hindutv_live also shared the post, which over 230 people have liked.

Following this, the hashtags #BoycottBollywood and #BoycottBhramastra started making rounds on social media. The claims have come to light as India and Pakistan continue to have a border dispute over the Kashmir region.

Pakistan has been witnessing a catastrophic flood and has faced economic losses worth USD 1.5 billion, Business Standard reported. The country has also lost over 1200 people because of the deluge.

However, the claim made in the tweet is baseless.

On September 2, 2022, BBC News Hindi clarified on Twitter that the picture of the tweet being circulated was inaccurate and had been made from a fake account. "A fake tweet related to Pakistan floods, and Ranbir Kapoor and Alia Bhatt's film Bhramastra is being shared on social media BBC News Hindi's logo. This tweet is fake, as BBC News Hindi did not share any such tweet".

A report by an English daily from Pakistan, Daily Times, also stated that the Bollywood actors "did not donate Rs. 51 crores to the Pakistan floods," as claimed.

Moreover, a September 4, 2022 report by Hindustan Times states that Pakistani actor Mehwish Hayat criticized Bollywood for "deafening silence" on floods in Pakistan. The report adds that the actor extended an appeal to Bollywood celebrities, urging them to get above politics and care for their fans in Pakistan.

Since the news was viral by a fake account and no mainstream media has reported any Bollywood celebrities donating to Pakistan's flood, we conclude the claim is false.