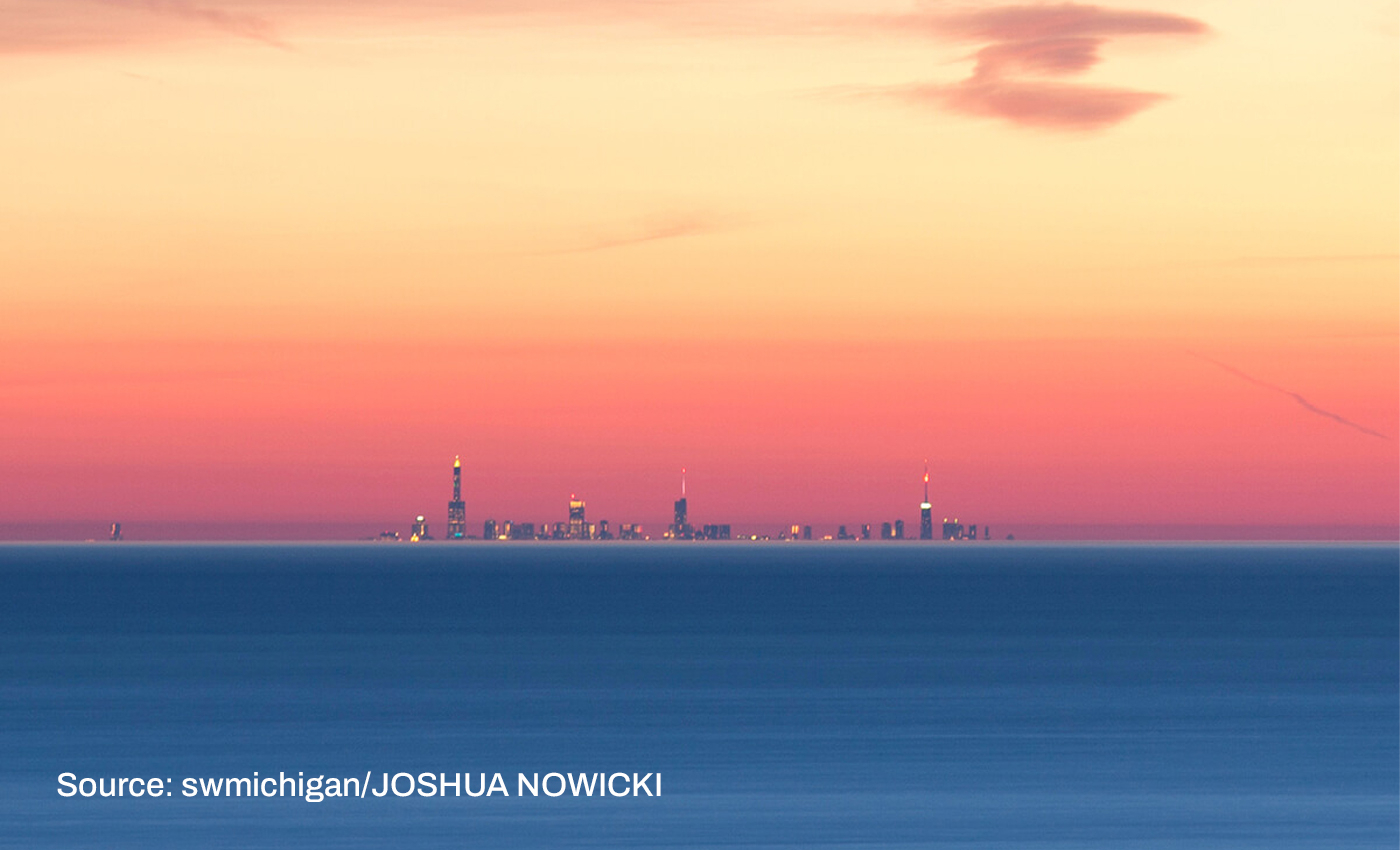 The atmospheric condition is the scientific reason behind this view of the Chicago skyline. The Earth is not flat.

Earth Science Picture of the Day (EPOD) is a service of USRA, an independent, nonprofit research corporation that provides space science and technology expertise. It published a "Mirage of Chicago Skyline" report on April 13, 2020. Photographer Sam Cornwell pointed out that it was an atmospheric phenomenon. The entire skyline was visible because of "special atmospheric conditions and was an illusion known as an inferior mirage."

ABC57, an Indiana TV station, explained the phenomenon in a 2016 article. Doctor Mark Rennie, an associate professor in aero-optics at the University of Notre Dame, says, "A mirage is just a case of atmospheric refraction; it's caused by the fact you have temperature variations in the atmosphere and these cause density variations." Further, the speed of light varies within the air; this variation has the effect of bending light rays.

Rennie explained, "the light from Chicago is being bent by the cold air above lake Michigan, slightly downward towards the observer here. That's helping light rays get around the curvature of the Earth so that Chicago can be seen almost all the way down to ground level." It should also be noted that the weather conditions affect the phenomenon, and the view cannot be observed every time as it is always changing.

The Flat Earth theory is a historic conspiracy theory; researchers have provided numerous facts and figures to debunk the many false claims arising from the conspiracy. Logically itself has published various pieces on this topic; in an article published in February 2022, Logically found that "all Flat Earthers share a fundamental distrust and disbelief of scientific institutions and established scientific theory." There are several instances of Flat Earthers conducting their own experiments in an effort to prove their views, only for their experiments to reaffirm the earth's roundness.

The actual shape of the Earth is almost a perfect sphere, but not entirely – it is slightly wider around the equator than around the poles. Astronaut photographs from space and the fact that travel itineraries work around the world are just some of the many items of proof that the Earth is round.

Due to atmospheric conditions and refractions, the entire Chicago skyline can be seen from the Indiana dunes. All scientific evidence points to the world being an oblate spheroid, hence we have marked this claim as false.

Earth Science Picture of the Day