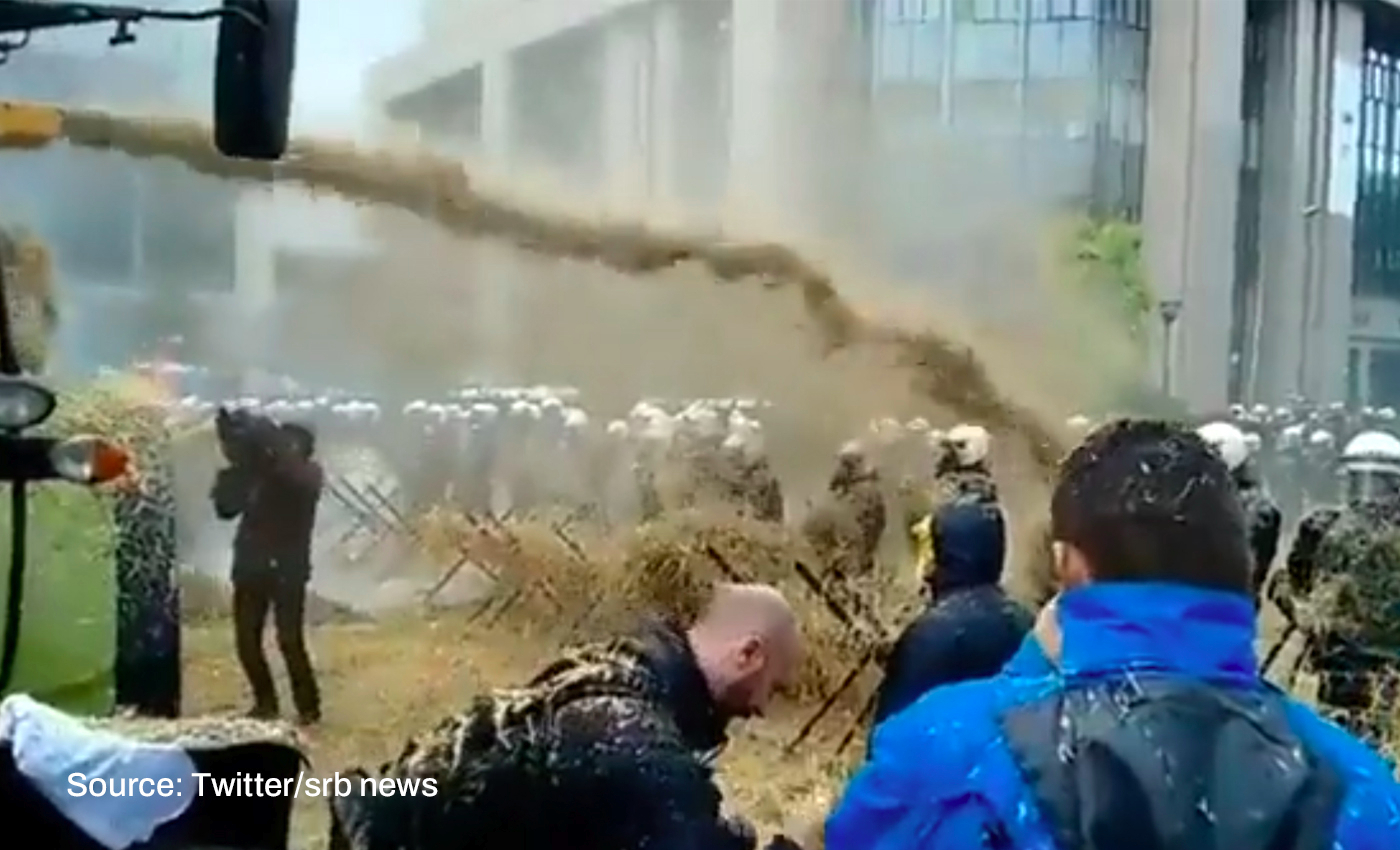 The video of farmer protesters spraying hay is from Brussels in 2015 that is now being misattributed to Netherlands farmers' protests.

Dutch farmers have been conducting a series of demonstrations across the Netherlands against the government's proposal to halve the country's livestock to reduce nitrogen emissions within the farming sector. Several videos of protests are viral on social media platforms; one such video posted on Facebook on August 15, 2022, claimed that protesting farmers sprayed hay and manure on the police. The caption reads, "Dutch farmers spray cops with manure." The same video is also viral on Twitter with similar assertions. However, the video from a different incident is being misattributed as Dutch farmers' protests.

According to a BBC News report on July 29, 2022, the Netherlands cabinet allotted €25 billion to reduce nitrogen emissions from the agricultural industry by 2030. "They estimate 11,200 farms will have to close and another 17,600 farmers will have to significantly reduce their livestock," the report stated. The laws included other proposals to reduce "intensive farming and the conversion to sustainable green farms." The report adds that protestors have been setting hay bales on fire, dumping manure on roads, and creating blockades at supermarket distribution centers.

The video being circulated is 2015 video unrelated to the ongoing protests in the Netherlands. It dates back to when farmers from Belgium, France, and Germany protested against the plummeting prices for their produce in Brussels outside European Parliament in nearly seven years ago. We found the same video shot from a different angle on YouTube posted by Associated Press on September 7, 2015. The video description states, “Protesting farmers on Monday used a tractor to spray straw at police during confrontations at a demonstration in Brussels to demand action to counter slumping prices."

The video was shot on the Schuman roundabout in Brussels; the image available on Google map corresponds to the street seen in the viral video. The same building, European External Action Service (EEAS), is also visible in the video as seen on the geolocation shared by Reuters in their debunking of the same video that went viral on Twitter.

A report from The Guardian published on September 7, 2015, also notes that protests held in Brussels witnessed around "4,800 farmers – with 70 from Britain – and 1,450 tractors that blockaded streets while some protesters pelted the police with eggs and sprayed milk and hay at them." The protests demanded support for the sector that was hit by a Russian ban on European Union food imports. A similar video can be found in the BBC report that also reinstates that the clip was not shot in the Netherlands.

Ever since the farmers’ protests in the Netherlands began, several unrelated/digitally altered images and videos have been shared across social media platforms. Some of this misinformation even linked the protests by the Dutch farmers to the fight against the purported elites who were trying to forcibly take over privately owned farmlands. Logically and other fact-checkers have debunked numerous such social media posts that were baseless.

The video of farmers' protests in Brussels in 2015 over low prices for their produce is being reshared and linked to the recent Dutch farmers' protests. While the Dutch farmers are protesting against their government’s nitrogen policies, the video in question is from a 2015 protest in front of the European Parliament. Therefore we have marked this claim as false.