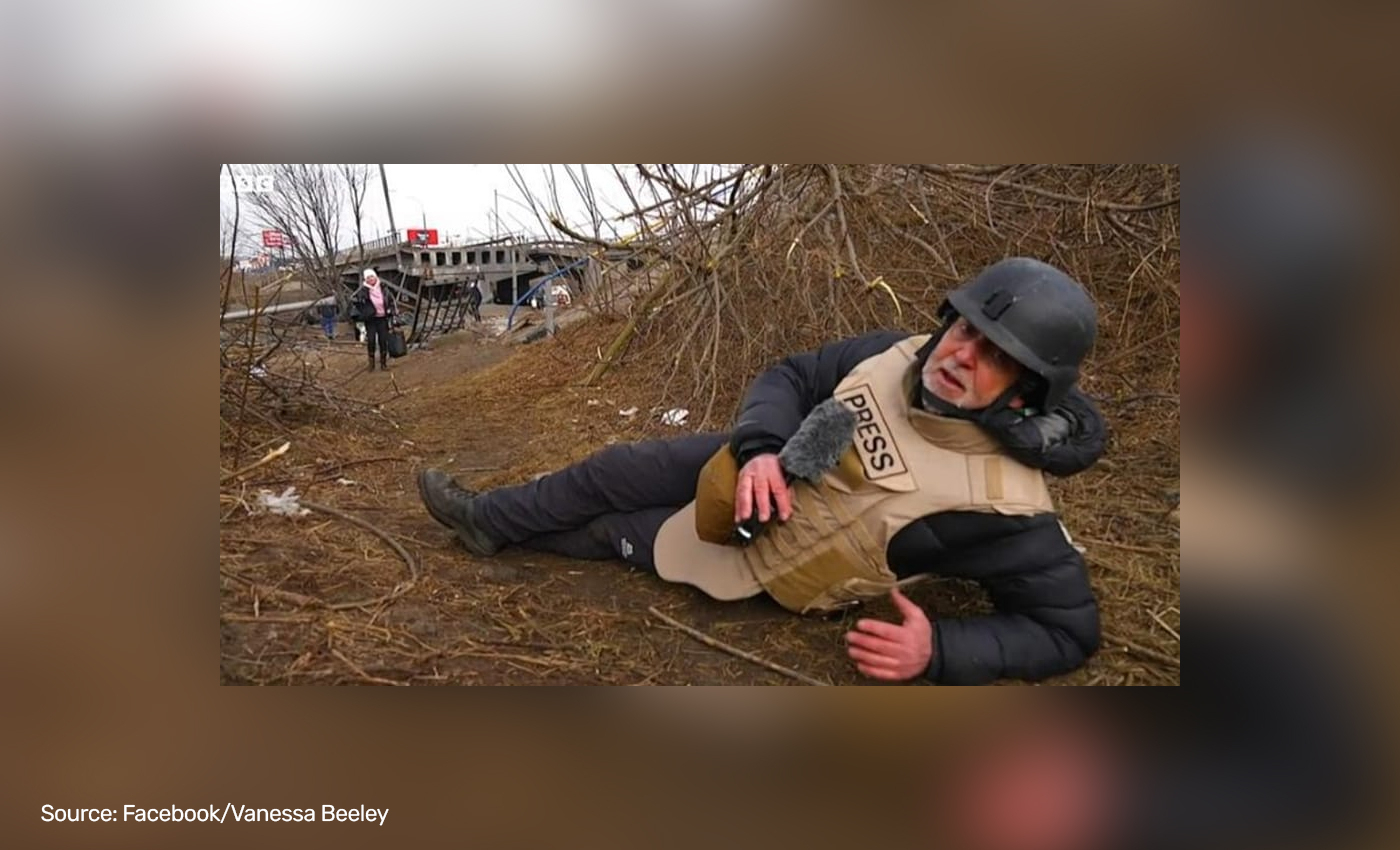 A still image from a BBC News video report is being shared without context. At the time of reporting, the two sides were trading shells near Irvin.

Ever since Russia began its invasion of Ukraine in February 2022, misinformation about the conflict has often dominated the discourse on social media platforms. A recent Facebook post, shared on October 5, 2022, carried an image of a journalist lying on the ground looking at the camera while a woman in the background looks in his direction. The post caption claimed that BBC journalist Jeremy Bowen was pretending to be under attack in Ukraine. The post suggests that Bowen was exaggerating the situation in Ukraine even when civilians, like the woman in the photo “carrying her shopping”, appear to be moving on with their lives casually. Bowen who can be seen wearing a black helmet and a vest that reads "Press” appears to be talking into a microphone in the photo. The post has been shared more than a thousand times on Facebook and is also viral on Twitter.

The viral image itself is a screenshot taken from a video report published by BBC News. The video was broadcasted on March 6, 2022, during the early days of the Russian invasion of Ukraine. In early March, BBC journalist Jeremy Bowen was covering civilians fleeing Irpin, a Ukrainian town near the capital city of Kyiv, as the Russians attacked Ukrainian forces. In the video, around the 1:51 minute mark, we can see Bowen reporting on the situation and explaining that he is at the edge of the town where Irpin bridge was blown by the Ukrainian forces to slow down the Russian invasion if the aggressors were to come to the city. Talking into the camera, Bowen said, "There is a fair amount of incoming fire, artillery fire. There are loads of civilians around..." We can also hear the sounds of explosions, firing, in the background as Bowen speaks.

The woman from the viral image can also be seen in the video. Initially, we can see the woman and other people hiding behind something, possibly a piece of debris, as they hear explosions and shelling. After a few seconds, the woman appears to move towards the spot from where Bowen was reporting. She is not holding a shopping bag; in fact, the woman is carrying her luggage and also seems to be trying to run from the city. There are other civilians behind her. In the video, we can also see other people taking their belongings and moving towards the remnants of the Irpin bridge to leave the town; some visuals showed that others helped the older and disabled people to reach the bridge. The BBC report shows that the woman was only watching the reporter, and the argument claimed in the viral post that she was "perplexed" is unfounded.

A still image from this video report circulated without context doesn't prove that the journalist was exaggerating the situation in Ukraine. A report by The Washington Post on March 7, 2022, included various images of Ukrainians fleeing the area of Irpin via a damaged bridge on the outskirts of Kyiv. It adds that many of them fleeing were older people who were taken in wheelchairs. Many of them were trying to cross the river using wooden planks placed over the Irpin River near the debris of the blown-up bridge. The bridge was destroyed by the Ukrainian forces to hamper a possible Russian move toward the capital. The report further noted, "The attacks came despite an agreement to create a humanitarian corridor in Kyiv and other cities to allow civilians to escape the intensifying war. The shelling did not hit the fleeing civilians, but it did instill fear and panic, forcing many to run or take cover at every reverberating shell."

Bowen also debunked the claims made in the viral post on Twitter. On October 6, 2022, he tweeted, "This malicious tweet and others like it allege that I faked a piece to camera in Ukraine in March. The allegations are utterly false; # fakenews. Insult me if you want. Don't insult thousands of civilians fleeing over Irpin bridge into Kyiv from Russian shelling and war crimes."

This makes it evident that Bowen did not fake the situation, and the image is being shared with false claims. AP News has also debunked similar claims made on Twitter. Claims with digitally altered images and some photos taken out of context have been floating around social media as the Russian-Ukraine conflict continues, and many of them have been previously debunked by Logically.

The screenshot taken from a BBC News video report is shared with incorrect details. Many civilians in Ukraine struggled to save their lives as Russian forces attacked the country and the opposing sides traded shells. The reporter did not fake the attack and explosions which resulted in civilians fleeing towns like Irvin. Hence, we have marked this claim as false.