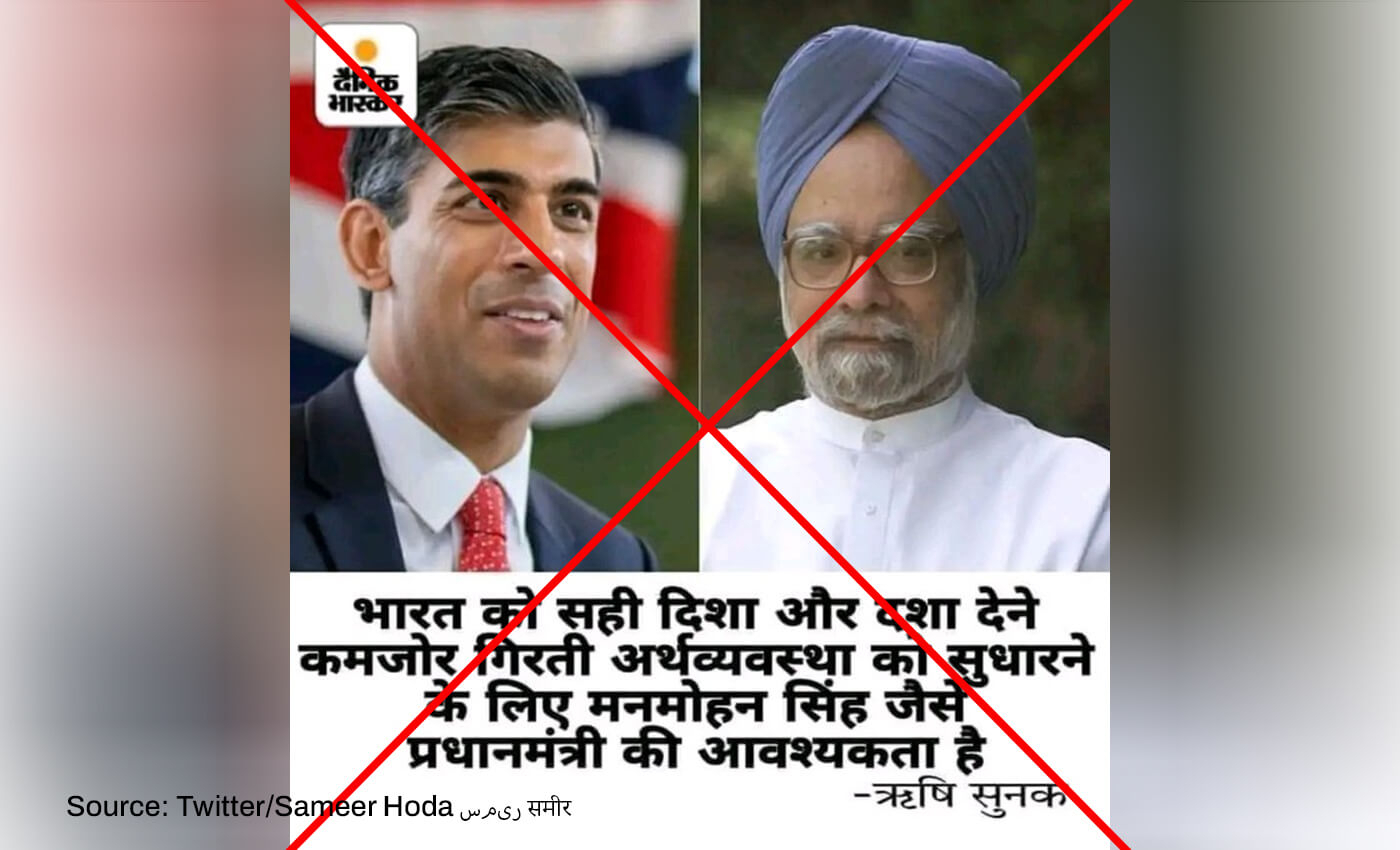 Newly-appointed PM of the U.K Rishi Sunak has not made such a statement about Manmohan Singh. The quote has been misattributed to Sunak.

A purported quote from newly-appointed U.K Prime Minister Rishi Sunak, wherein he makes a statement praising former Indian PM Manmohan Singh, has been going viral on social media. The post, which appears to be a quote card published by Hindi news publication Dainik Bhaskar, carries split-screen photos of Sunak and Singh along with the Hindi quote attributed to the former. According to the post, Sunak said India needs a Prime Minister like Singh to help steer India and save its weak, failing economy. The quote card carries the logo of Dainik Bhaskar in the top left corner. Several supporters of the Indian National Congress also shared the photo.

However, we found that the image in question has been digitally altered. Sunak did not make such a statement, and Dainik Bhaskar did not publish this quote card.

We first scrolled through the posts on Dainik Bhaskar's verified Twitter handle and found a similar photo from October 25, with the same split-screen image of Sunak and Singh. While the top halves of the card and the viral image look the same, the bottom half of the original post carries a different Hindi text and is in yellow and black lettering. The text (originally posted in Hindi) states: "Chidambaram and Tharoor suggest that India too should have a minority PM: BJP says have you forgotten Manmohan Singh." The accompanying post (also in Hindi) says, "Sunak has been elected the new Prime minister of Britain. He is the first Asian and of Indian descent to reach this position. P. Chidambaram and Shashi Tharoor have started a new debate on Sunak becoming the PM. The BJP also attacked the Congress fiercely." A link to the related news story, which expands further on the heated debate between the Bharatiya Janata Party (BJP) and Congress, is also available in the tweet. It is evident that the image used in the original Dainik Bhaskar tweet had been edited to make a fake quote card that is being shared on social media. The text at the bottom has been replaced with a purported quote by Sunak, who became Prime Minister on October 25.

The only reports connecting Sunak and Singh were of the spat between the BJP and opposition parties, including Congress, after the former's ascent to power. According to a report by The Indian Express, opposition leaders, including PDP president Mehbooba Mufti and Congress leaders P Chidambaram and Shashi Tharoor had commended countries such as the U.K. and the U.S. for accepting ethnic minority members like Kamala Harris and Sunak as leaders. In her tweet, while lauding the U.K, Mufti lamented that India was still in the grasp of "majoritarianism" and "divisiveness." The BJP was quick to respond with reminders that former Manmohan Singh, a Sikh, had served as the Prime Minister, and Dr. APJ Abdul Kalam, a Muslim, had been President of India.

While opposition parties and leaders have questioned the ruling BJP government for its failure to check growing inflation and unemployment, former Chancellor of the Exchequer and the new U.K. PM Sunak did not make any statement praising Singh. No media report suggests that Sunak said that only someone like Singh could save India’s economy.

An actual post by Dainik Bhaskar, about a battle of words between BJP and Congress leaders, has been edited maliciously to look like a quote card of Sunak praising Singh. The original text has been replaced with a fabricated quote attributed to Sunak. Therefore, we have marked this claim false.