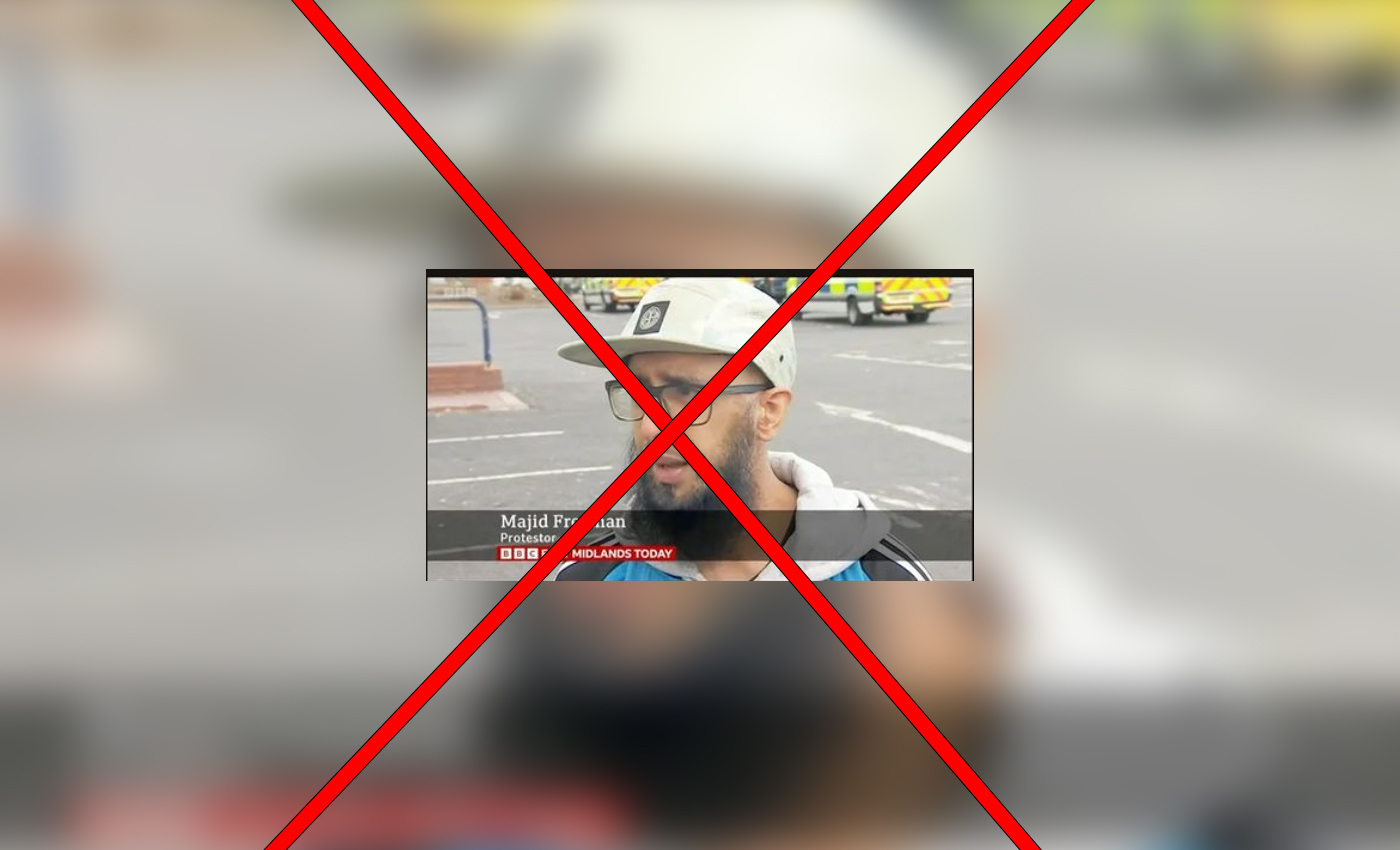 The BBC did not interview Freeman about the Leicester unrest. They quoted him in an article about police actions during the clashes.

In September 2022, Hindu-Muslim clashes broke out in Leicester City. Since then, misinformation regarding the incident has spread on social media. A recent Instagram post claimed that the BBC interviewed Majid Freeman, a community activist, knowing that he had spread misinformation. The post contains screenshots of Freeman's tweets, in which he states that a young Muslim woman was "approached by 3 men," but ran to her college to escape. Freeman claims that the Leicester police are aware of the incident and reported it. The post has an alleged screenshot of Freeman being interviewed by the BBC. Part of the Instagram post caption reads, "Why is the BBC interviewing someone who has already been proven a liar? Why no interview of the Hindu community who suffered the attacks from Islamists for weeks?" This post has circulated on Instagram and Twitter.

On September 21, 2022, the BBC quoted Freeman about the clashes that took place in an article. In the article, Freeman said he was angry about what he regarded as a lack of police action - "it was a riot waiting to happen." We did not find any videos of the BBC speaking with Freeman in August-September 2022 about the Leicester violence.

On September 25, the BBC wrote an article about the disinformation spread during the Leciester clashes. In the article, they debunked a tweet of Freeman's where he claimed three Hindu boys kidnaped a 15-year-old Muslim girl. Freeman also claimed that the police confirmed the incident. BBC News quoted Leicester police's statement after which noted that the event did not occur. "Freeman deleted his posts and said the attempted abduction had not happened and that his initial version had been based on a conversation with the family making the allegation," the BBC reported. Prior to the clarification, the BBC did not quote or propagate Freeman's claim.

After going through the BBC News website and social media handles, we did not find any recent interviews with Freeman. We also did a reverse image search of the alleged BBC interview screenshot and did not find any matching BBC videos or images about the recent unrest. BBC News last interviewed Freeman in 2014 about British hostage Alan Henning, who was captured by Iran.

The Leicester police have also debunked claims on this topic via their Twitter handle. Leicestershire Police's temporary chief constable, Rob Nixon, told the BBC that social media had played a "huge role" in fanning the flames of the communal violence. Nixon also said people are receiving fake news via social media and are spreading it without verifying it. "My plea is that please, if people are seeing information on social media, if they can't validate it, please don't circulate it," Nixon said.

Most media reports about the Leicester communal clashes state that social media disinformation is a leading factor. On September 19, the Mayor of Leicester, Peter Soulsby, said that "claims circulating online are very distorting, after tensions between Hindu and Muslim groups," The Guardian reported.

The BBC did not interview Freeman regarding the recent Hindu-Muslim clashes in Leicester. The BBC only quoted him as an eyewitness. The news organization did not report his claim that three men allegedly approached or kidnapped a Muslim girl. In contrast, the BBC has debunked this claim in its report about the Leicester clashes. Hence, we have marked this claim as false.

The NHS removed information about myocarditis from its website.