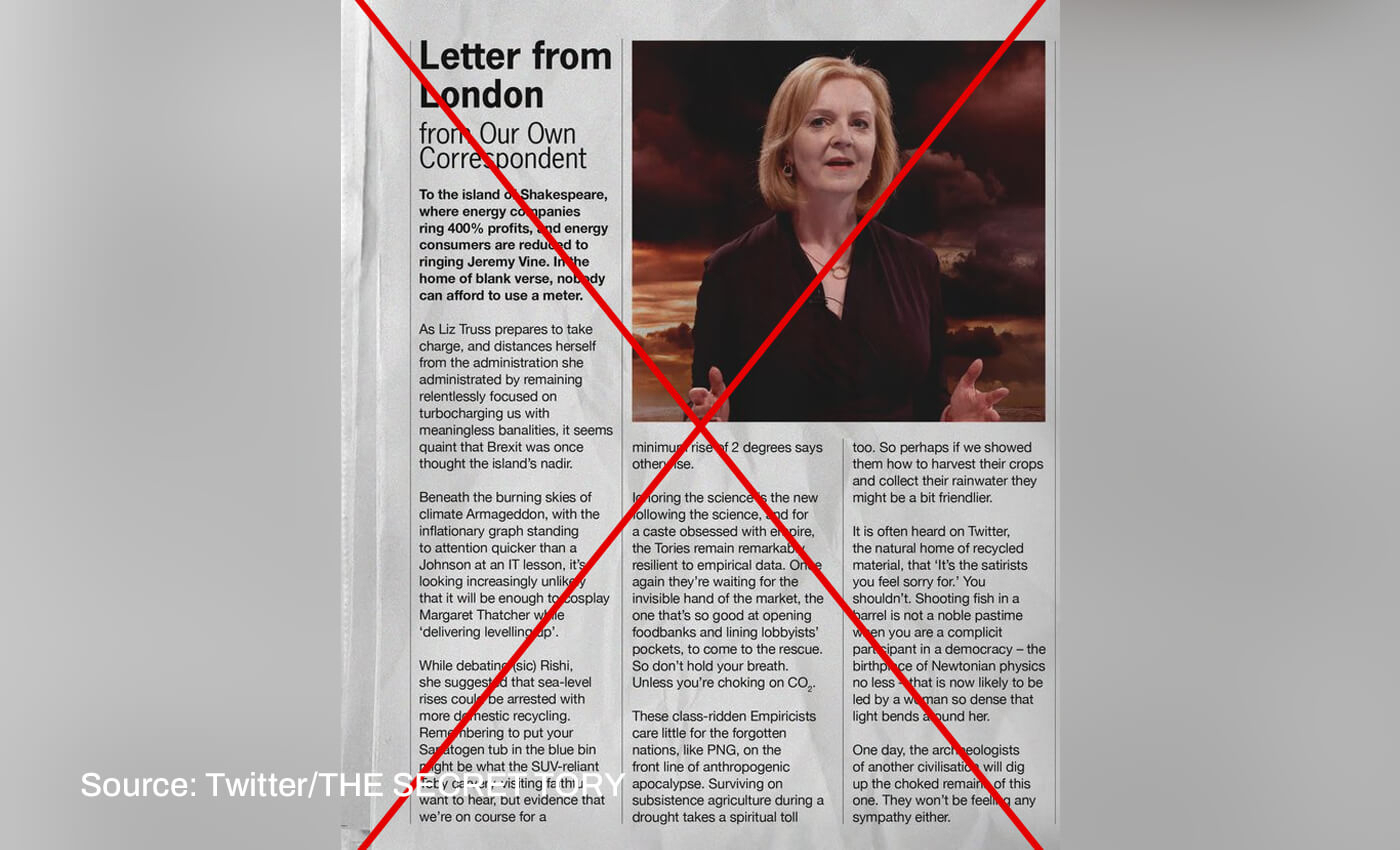 Liz Truss and Rishi Sunak are the final candidates to succeed Boris Johson's position as the Conservative Party leader and British Prime Minister. The result will be announced on September 5 after the ballots are closed on September 2, 2022. There is regular and almost constant reporting on the elections by various news organizations. A picture of a purported newspaper article is viral on social media platforms, with the headline "Letter from London" with a sub-heading "from Our Own Correspondent." The reported newspaper article also includes a photo of U.K Foreign Secretary Liz Truss. The article has also been shared on Facebook on August 2 with the caption "From the Papua New Guinea Courier...".

Papua New Guinea Post-Courier is a leading newspaper based in Konedobu, Port Moresby (capital and largest city of Papua New Guinea). No corresponding result came up when we looked for the article on the website and their social media accounts.

Using the keywords from the alleged newspaper article, we found the viral newspaper clipping was shared on Twitter as well. It was posted by the handle @secrettory12 (THE SECRET TORY), on August 1, 2022. The description of the Twitter account is linked to a book about the Conservative government on Amazon, titled "The Diary of a Secret Tory MP: (Almost!) True Stories from the Heart of Westminster." The account tweeted another similar letter on August 20, saying, "The Papua New Guinea Courier's U.K. correspondent has just passed me their latest letter from London" on Truss. The Patreon site of THE SECRET TORY has the tagline "Creating satire for the (w)ages." On August 24, the account tweeted the link to their Patreon. The newspaper clipping which was evidently fabricated or digitally altered was in all likelihood shared as satire by the account and does not make for an authentic, credible news report.

The viral letter about Truss read: "As Liz Truss prepares to take charge and distances herself from the administration, she administrated by remaining relentlessly focused on turbocharging us with meaningless banalities, it seems quaint that Brexit was once thought the island's nadir." Further, it pointed out a few of her assertions regarding the climate against former chancellor Rishi Sunak. The letter added, "now likely to be led by a woman so dense that light bends around her."

BBC News reported on August 18 that both the candidates have already set out a list of policies to be taken over in the coming months. For one of the policies, Truss said she would set aside for the renewable sector and lower the energy bills. Some of her policies focused on reducing the cost of living and reforming insurance tax policies.

The viral letter is a satirical piece being shared with different pictures of Truss. The Twitter user who posted it is known to make satirical posts. The Papua New Guinea Post-Courier newspaper has not published such a piece. Hence, we have marked this claim false.