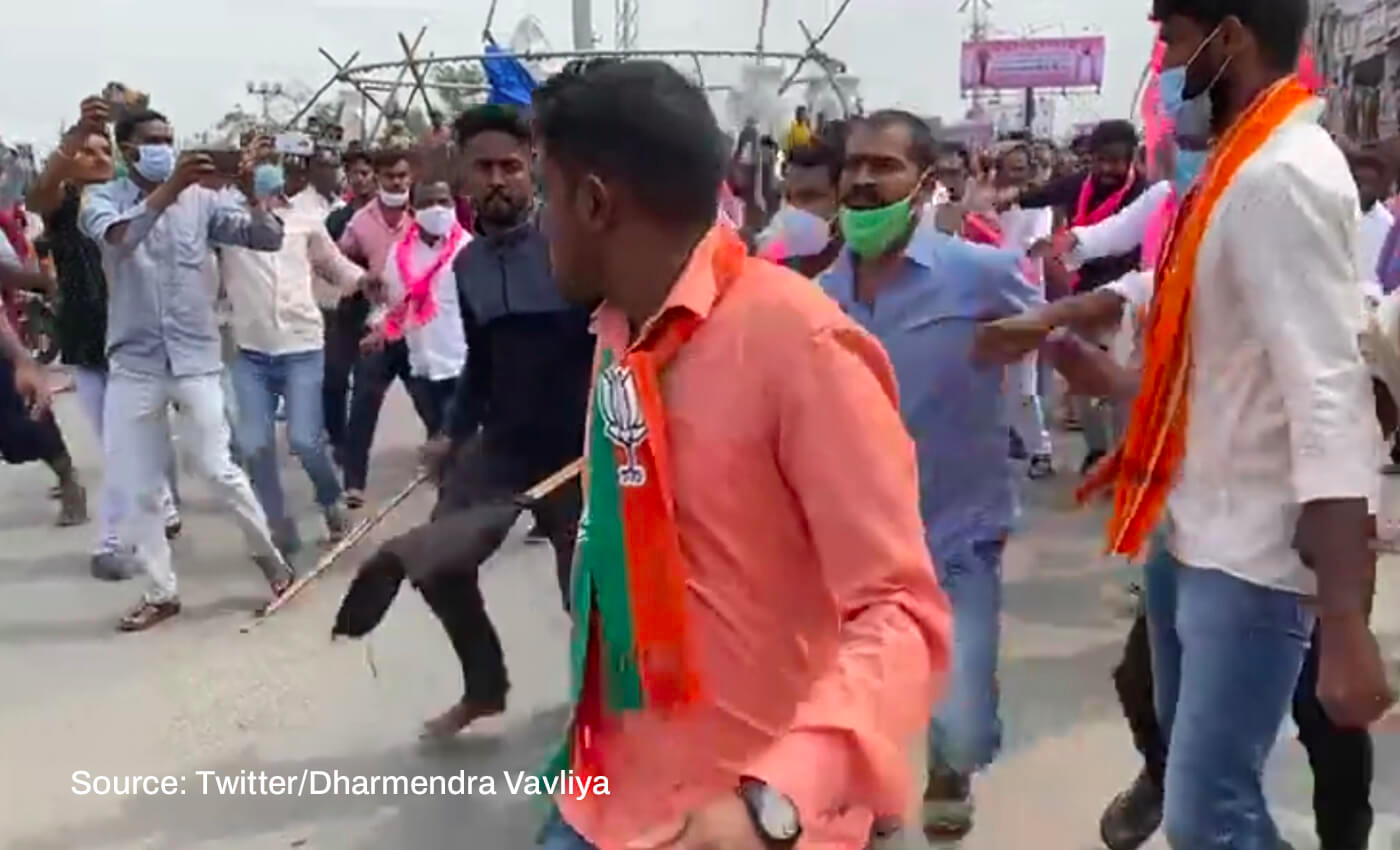 The video is from an altercation between BJP workers and TRS members in Telangana in February 2022. The incident has no connection to Gujarat.

The caption of a 30-second video on Twitter alleged that the Bharatiya Janata Party (BJP) members were beaten up in Gujarat. In the video, a group of individuals sporting pink scarves chase and use sticks to strike people donning saffron scarves on the street. The tweet has a Gujarati caption, ''પહેલા બીજા રાજ્યોમાં ભાજપ વાળા ને મેથીપાક ચખાડવાની પ્રથા હતી તે હવે ગુજરાતમાં પણ ચાલુ થઈ ગઈ છે.'' The English translation of the Gujarati caption read, "Earlier in other states it was a practice to make BJP members taste fenugreek but now it has started in Gujarat too.'' The Twitter post purported to claim that the incident occurred in Gujarat; however, contrary to the claim, the viral video originates from Telangana.

We checked for recent stories of political conflicts in Gujarat but couldn't find anything relevant to the claim. A close inspection of the viral video revealed the phrase "Jangaon Traffic Police" on one of the traffic booths at the 22-second mark. Jangaon is a district in Telangana. Towards the video's end, at around the 25-second mark, we also noticed a billboard with the name and image of the state's Chief Minister K Chandrasekhar Rao, commonly known as KCR. Further, pink scarves were worn by those who were chasing the alleged BJP activists. Pink has been designated as the official color of the Telangana Rashtra Samiti (TRS), a local political group that primarily functions in the state of Telangana. Considering this as a reference, we located the incident's report in The Times of India through a keyword search. The viral video's visuals are from a violent altercation between BJP and TRS supporters during a demonstration against Prime Minister Narendra Modi in Jangaon in February 2022.

The TRS party protested across Telangana in February against Modi's remarks on Telangana state formation in Rajya Sabha. According to The Hindu, Modi told the Rajya Sabha on February 8 ''that division of erstwhile Andhra Pradesh did not take place properly.'' Protesting against Modi's comments, TRS members arrived at the Town Centre to burn an effigy of Modi. Reaching the spot, BJP members protested the TRS's decision to burn Modi's image. Following this, clashes occurred as TRS and BJP leaders brawled with flagsticks, and TRS members chased the BJP cadre. The fight between the two groups was captured on the video and widely circulated. Furthermore, we found the same visuals in the news broadcast from TV9 Telugu on February 9 this year that is available on its YouTube channel.

The Indian Express report said that the TRS activists attacked BJP workers, and the scene appeared out of control. The Jangaon police, however, stepped and controlled the situation. Boom Live has debunked this same viral video in February 2022, when it was misrepresented as BJP workers being physically attacked in Uttar Pradesh before the elections. On February 14, Uttar Pradesh held its second round of voting, and against this backdrop, the same video was viral. This same video is now incorrectly being spread as an incident in Gujarat, which is headed for state assembly elections this year.

The video is not from Gujarat. It shows a conflict between BJP and TRS party activists in Jangaon, Telangana, in February 2022 during protests in retaliation to the PM's speech on the formation of the state. Therefore, the claim made in the post is false.