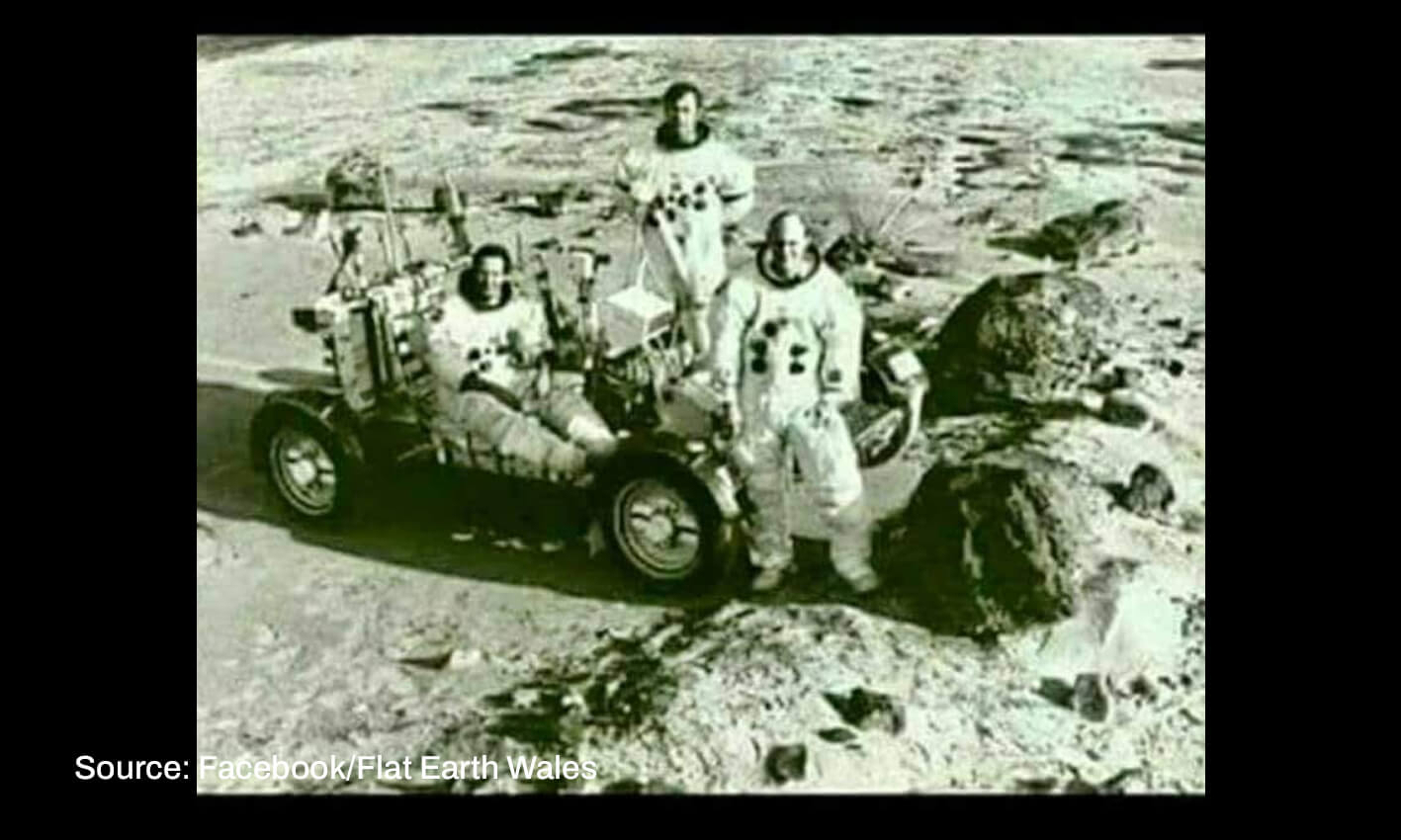 The photo shows Apollo 16 astronauts at a training exercise on Earth before the lunar landing mission.

A photo purportedly showing three astronauts on the surface of the Moon, without helmets, is being shared alongside the claim that the lunar landing missions were a hoax. The photo, which shows one astronaut sitting on a lunar rover, and two others standing beside him, is being spread as proof that the Moon landing was faked, a long-standing claim which has been fact-checked many times over the years. "So these guys on the moon took a moment to take their helmets off for this Pic," claims the caption embedded in the photo. The photo has been doing the rounds since 2017 and resurfaced recently on Facebook. It insinuates that the celebrated lunar landing missions undertaken by the National Aeronautics and Space Administration (NASA) were staged.

However, the claim is false. While the photo is accurate, it was taken on Earth and not on the Moon. We ran a reverse search on the viral image and found a color version of the same photo on the verified historical page of NASA. The post's caption, from April 16, 2017, provided context about the Apollo 16 mission and identified the three men in the photo as John Young, Charlie Duke, and Ken Mattingly. The caption added that it showed the three during a training exercise before the launch.

Another result in the reverse image search led us to the same photo on the image-hosting website Alamy. The caption of this photo stated that it showed the Apollo 16 astronauts amid training for the lunar landing mission. Further, it said the photo was taken on February 6, 1972, over two months before Apollo 16 launched on April 16, 1972.

We also came across the photo in a 1999 interview with Charles Duke, the lunar module pilot of Apollo 16, published as part of the NASA Johnson Space Center Oral History Project on NASA's History division website. While the caption here did not state the year, it said that the astronauts could be seen posing during a training exercise at the Kennedy Space Center.

Using a combination of keywords defined by our findings so far, we ran a search and came across the same photo on the photo-hosting website Flickr, published by the handle 'NASA on The Commons.' The caption also stated that the three astronauts could be seen preparing for the lunar landing mission during a training exercise. The photo was dated February 6, 1972.

A similar photo of Young and Duke sitting on a training version of a lunar roving vehicle without helmets is available on Alamy, showing that several such photos were taken. The caption of this photo states that Young and Duke can be seen on a field at the Kennedy Space Center, simulated to represent the lunar surface. This explains why the viral photo looks like it could have been taken on the Moon but is actually of the Kennedy Space Centre.

Apollo 16, the sixth crewed lunar landing mission, launched from Kennedy Space Center, Flordia, on April 16, 1972, with the mission of conducting scientific studies in the landing site in the Moon's Descartes highlands. The 11-day mission ended with a touchdown in the Pacific Ocean on April 27, 1972. According to NASA History, Apollo 16 was the first mission to land in the hilly, grooved highlands, where Young and Duke collected samples and placed instruments, which would later help researchers disprove a theory that the highland rocks were volcanic in origin. On NASA's website, we found a photo of the astronauts on the Moon, which shows that they were indeed wearing helmets. The photo shows Young on the Moon, saluting the flag of the United States, and was taken by Duke during the mission's first extravehicular activity (EVA). In Duke's interview on NASA's History Division website, two more photos show Young carrying out various aspects of the first and third EVAs during the mission. In both, he can be seen wearing his helmet.

NASA's Apollo program was designed to take humans to the Moon and return them safely to Earth, with six missions achieving this goal. According to records, the program consisted of 11 total spaceflights, four tested equipment, and six landed people on the moon. The first crewed flight occurred in 1968, and in 1969, Apollo 11 became the first to land humans on the Moon. By the time the final mission occurred in 1972, 12 people had walked on the moon.

An image of the three Apollo 16 astronauts posing for a photograph without helmets on a surface resembling the Moon is being shared to claim that the lunar landing missions were a hoax. However, the photo is from a training session two months before the mission's launch and was taken at the Kennedy Space Centre. Photos taken during the Apollo 16 mission show the astronauts wearing their helmets, and there is significant evidence to prove that the Moon landings were not staged. Therefore, we have marked this claim false.