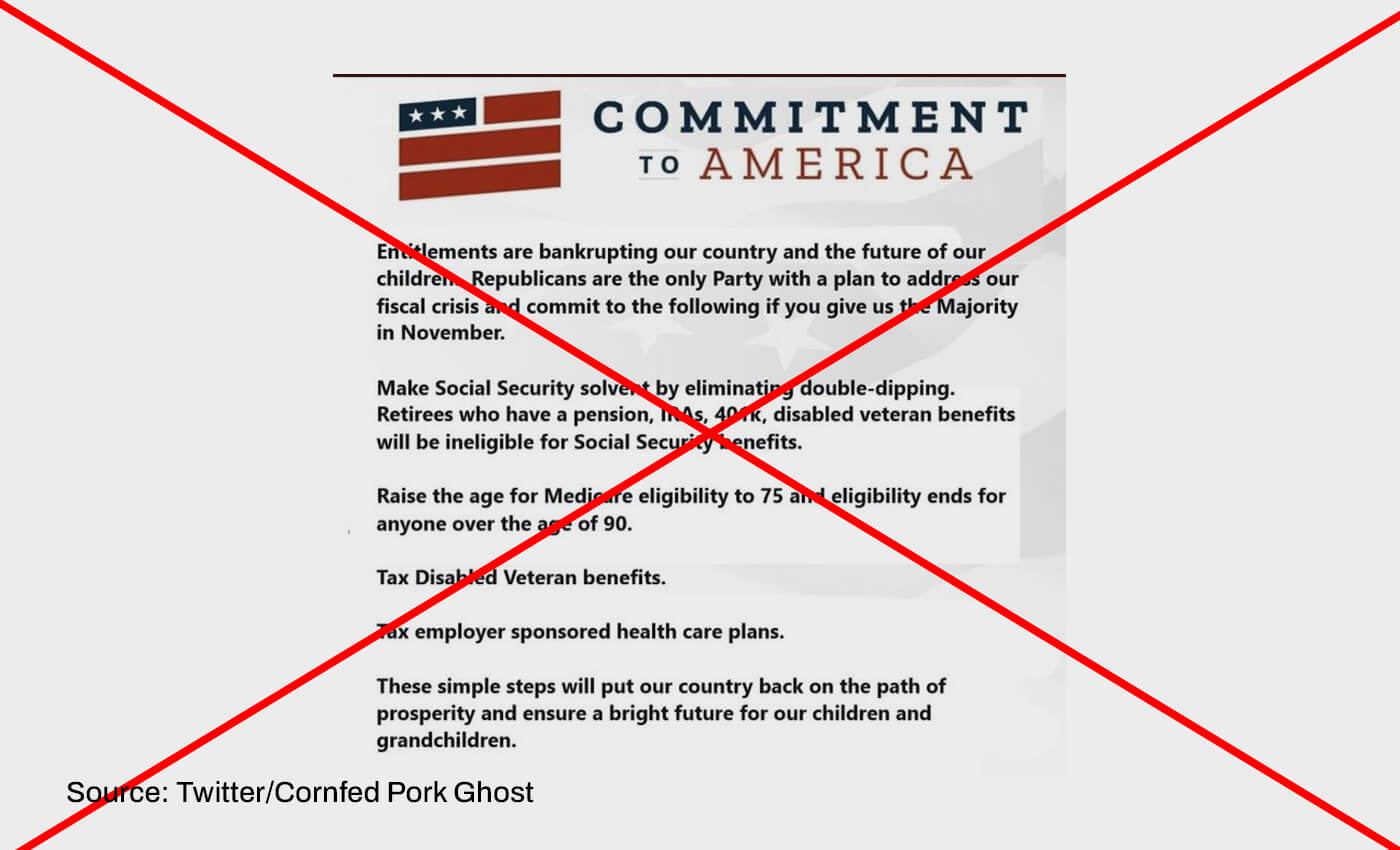 The viral graphic is fake. There is no mention of a tax on benefits for disabled veterans or employer-sponsored health care plans in the original plan

Two weeks ahead of the upcoming midterm elections in the United States of America, the Republican Party unveiled its poll agenda termed ‘Commitment to America’. Several social media users have since shared a graphic, with the Commitment to America emblem, that purportedly illustrates the plan’s details. The graphic states that if Republicans win control of Congress in November, they will tax employer-sponsored health insurance plans and benefits for disabled veterans, apart from raising the age at which people can enroll in Medicare from 65 to 75 and ending eligibility at 90. The graphic also mentions excluding some groups of people from receiving Social Security benefits if they have other retirement assets. The graphic has been shared widely on Facebook, Twitter and other social media platforms.

On September 23, 2022, Minority Leader of the United States House of Representatives Kevin McCarthy unveiled ‘Commitment to America’, a plan he claimed Republicans will implement if they win the midterm elections scheduled for November 8. According to an NPR article from the same day, the four significant elements of ‘Commitment to America, are economy, safety, individual freedom, and government responsibility.

The official Commitment to America graphic covers essential policy issues, such as immigration and the economy. It mentions Social Security and Medicare only once, saying it will "save and strengthen" the plans. There is no mention of increasing the eligibility age to 75 and ending benefits at 90. A document describing the plan's fiscal suggestions states, "Congress must be prepared to make reforms to extend the solvency of the entitlement programs." However, it makes no explicit mention of altering any specific programs.

It is true that Republicans in Congress have suggested raising the Medicare qualifying age in the past, but the suggestions don't line up with the viral graphic. The Republican Study Committee's budget proposal for the 2023 financial year does not specify a precise age but considers changing the Medicare eligibility age to match improved average life expectancy. The study committee also called for gradually changing the retirement age at which beneficiaries can receive their full benefits to 70. Currently, Medicare is available to people aged 65 and above, and Social Security considers the full retirement age to be between 66 and 67, depending on the beneficiary's birth year.

Even Chairman of the Republican Study Committee Jim Banks tweeted on October 18, 2022 that the Commitment to America image going viral on social media is fake.

The graphic claiming that the House Republican will take Social Security away from disabled veterans, and will raise the age for Medicare to 75 among other plans is fake. The House Republicans have not announced any such plans.