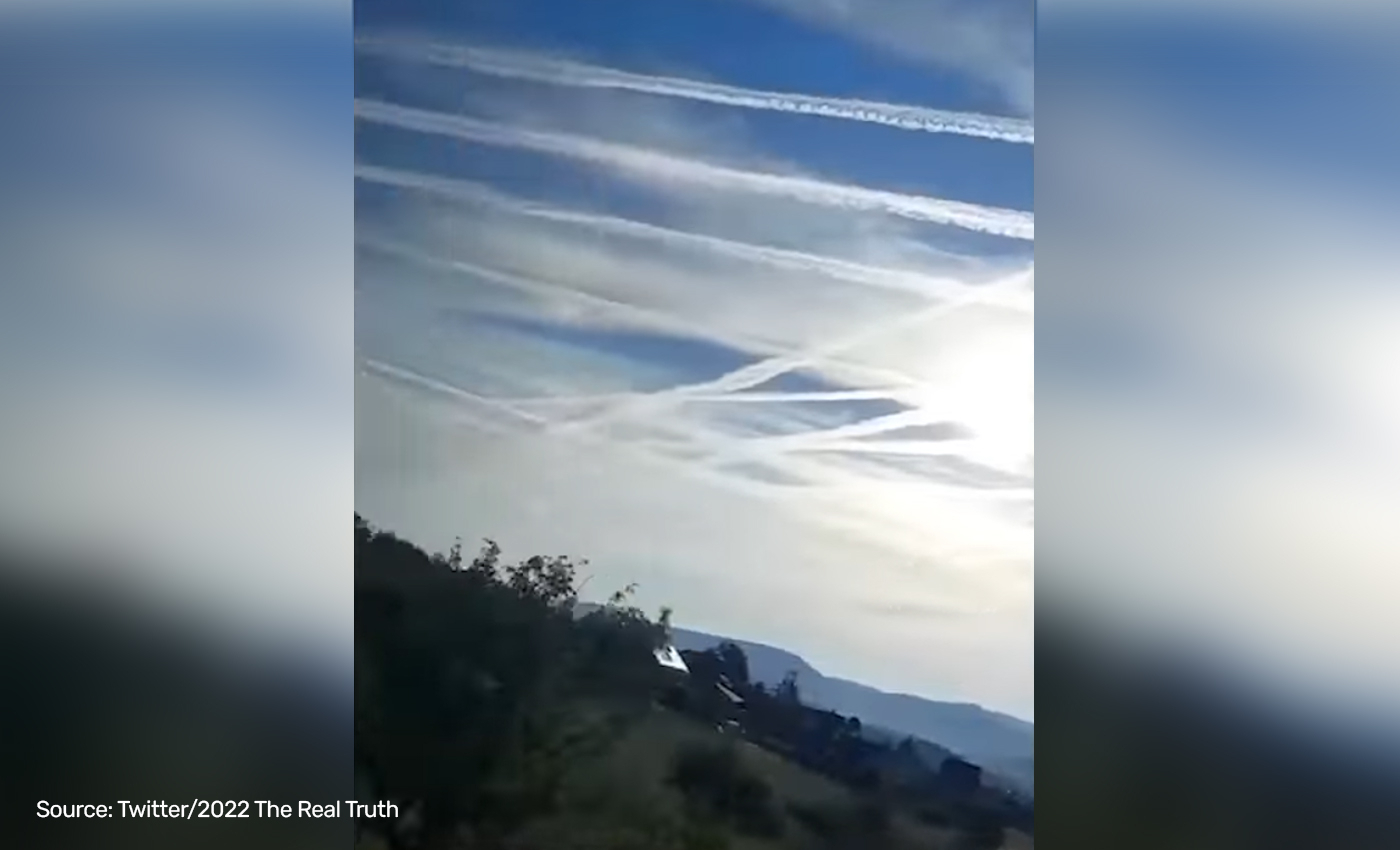 White lines on the sky are water-based contrails left by flying aircraft. Claims that 'chemtrails' are sprayed to block the Sun are baseless.

A Facebook video showing white trails left behind by flying aircraft warned viewers to worry about the process. The narrator in the video refers to the phenomenon as ‘chemtrails’ or ‘geoengineering’ and argues that the phenomenon occurs not only in the Netherlands but globally affecting everyone. The narrator referred to the process as a ‘social experiment’ and said it is unclear how in the long run these tests will affect the world and millions of farmers internationally. He asserts farmers worldwide will be affected and has already affected Dutch farmers.

The narrator further claims that numerous global elites, including Bill Gates and former CIA Director John Brennan, have been discussing the process for decades. The video alleges that Gates has frequently discussed spraying particles into the sky to block the Sun.

Conspiracy theorists have long referred to contrails, or the hazy trails in the sky left by flying airplanes, as ‘chemtrails’ alleging that these trails are a part of a ‘hidden strategy for controlling the weather or taking over our minds’. The conspiracy has persisted for decades, even though the allegations surrounding ‘chemtrails’ have been debunked multiple times.

The claim that Bill Gates funded a project called ''Dim the Sun,'' and is working on a way to block the Sun's rays from reaching Earth is malicious and unsubstantiated. It appears to be based on an experiment, Stratospheric Controlled Perturbation Experiment (SCoPEx) conducted by Harvard University researchers. The experiment is supported by Gates among several others. However, the video misrepresents the project's purpose and incorrectly says Gates wants to control the entire solar system. Gates did not devise such a plan, nor is SCoPEx plotting to block the Sun.

According to Poynter, the experiment would result in launching 4.4 pounds of calcium carbonate, benign dust, 12 miles into the sky via a weather balloon above the Arctic. The objective is to acquire data for analysis of solar geoengineering's impacts and potential risks.

The Facebook video includes a clipping of former CIA director Brennan implying that he acknowledges that geoengineering is regularly used. Logically has already verified both the claim and the video. Our previous check said a 2016 footage of the ex-CIA director talking about using stratospheric aerosol injections to reverse global warming has been misinterpreted as him admitting to using ‘chemtrails’ for invasive purposes.

In the Facebook post, the narrator points toward the end, says, ''no one knows the large-scale effects of chemtrails it has on our planet'' and concludes that ''millions of farmers worldwide will soon be affected by this.'' The U.K. Department of Transport has categorically stated that there is no evidence that contrails are harmful to human lives. However, the department asserts that often reoccurring contrail plumes caused by airplanes can affect how solar radiation is reflected onto the earth, impacting the planet’s temperature. It is, however, unfounded that it is sprayed on purpose to block the Sun's rays as part of some social experiment. No scientific study states that contrails will harm farmers worldwide or have already harmed Dutch farmers.

There is no evidence that ‘chemtrails’ are sprayed or used to block the Sun's rays in any country. The video makes baseless claims about Bill Gates and the former CIA director being involved in spraying chemtrails. Such claims have been combined erroneously to infer that chemtrails are used to block the Sun. Therefore, we mark the claim false.