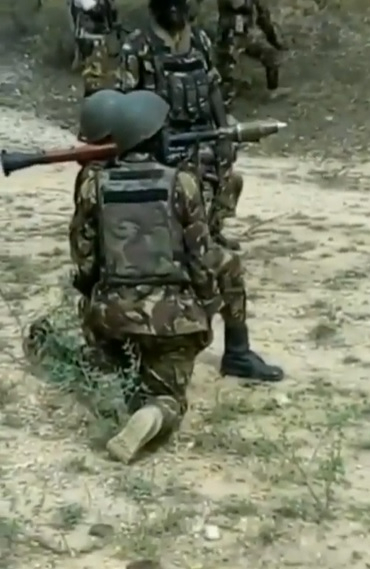 The video does not depict Russian force soldiers as the soldiers depicted are wearing Kenya's military uniform.

A video of uniformed soldiers firing a rocket-propelled grenade has gone viral on Facebook. The video shows the soldiers firing the weapon and running for cover after it appears to malfunction. Text and audio captions claim that the soldiers are Russian forces using weapons from the "Soviet era." However, the claim is baseless.

The text on the video reads, "Russian soldiers using weapons that have been in the cupboard since the Soviet times." The video has been shared on a Facebook group called 'Widnes Bouncy Castle Hire' and has received 7,700 reactions and 888 comments.

Using a reverse image search, we found an extended version of the video on YouTube. The video was posted from an account called Kenyan Bytes on 23 February, 2022, with a caption stating, "KDF officers Escape death after their RPG failed to launch."

Lead Stories also checked the video and spoke to Nick Reynolds, a research analyst for land warfare at the U.K.'s Royal United Services Institute. According to Reynolds, "The camouflage pattern and, in particular, the body armor design indicates that the personnel in question are from the Kenyan Defence Forces."

The soldiers in the video are from Kenya and not serving the Russian army. Therefore we are marking this claim as false.