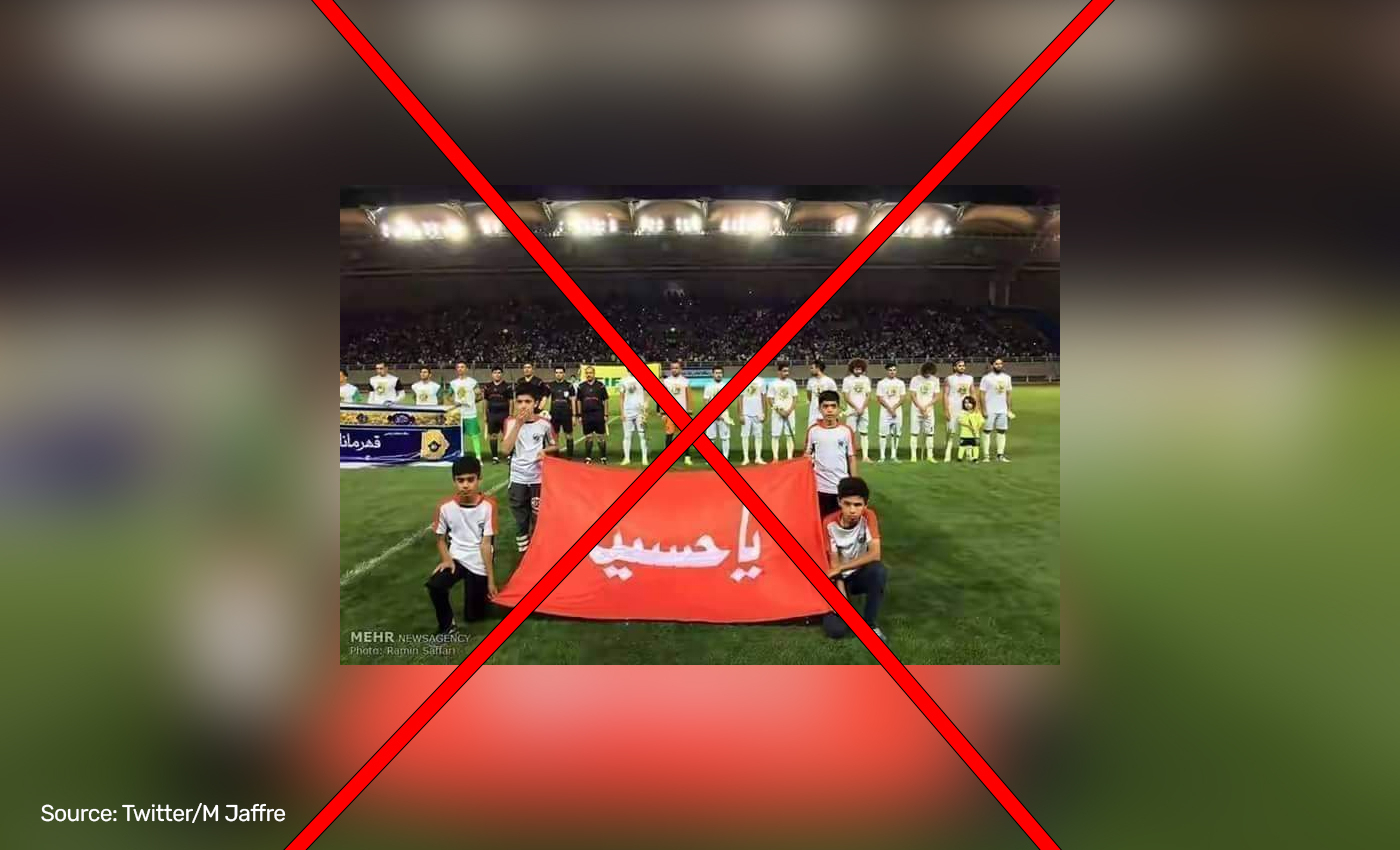 A flag bearing the "Hussain" name was hoisted at the inauguration of the Imam Reza Stadium in 2017. It is unrelated to the 2022 FIFA World Cup.

Several misattributed images and videos have been circling online since the 2022 World Cup began in Qatar. Iran played its first match of the tournament on November 21. Reportedly, players refused to sing the national anthem before their opening match against England in solidarity with anti-government protests that continue to take place following Mahsa Amini's death.

One such image posted on Twitter claims, "In the FIFA World Cup, the Iranian team hoisted [a flag in the] name of Imam Hussainع at the ground." The image shows two boys holding the red flag, which has a transcription written in what appears to be Arabic. A team of football players is visible in the background. However, the image is old and unrelated to the 2022 FIFA World Cup.

On conducting a reverse image search, we found that the image is from 2017, taken during the official inaugural ceremony of Imam Reza Stadium in Mashhad, Iran. The same image can be found on the Iranian government website Mehr News Agency and dates back to September 16, 2017. The page contains several other images from the event, taken by photographer Ramin Saffari. A short description reads, "Imam Reza Stadium of Mashhad, the capital city of northeastern province of Khorasan Razavi, was officially opened on Saturday with a football match between the Team of Mashhad and the Team of Karbala, from the Iraqi city of Karbala. The venue is believed to be the most modern stadium of Iran so far."

A report by Iran Front Page reiterates that the stadium was inaugurated in 2017, confirming that the photos were taken at this time. A similar image, taken by Mohsen Rahimi, was published on Mashregh News, a non-governmental news website in Iran. The site also confirms that the viral photo was captured during Imam Reza Stadium's inaugural ceremony, followed by the match between the Khorasan and Karbala teams.

Google Translate recognizes the script on the flag as the Sindhi language and translates the phrase as "oh Hussein." Although we could not ascertain if this actually referred to Imam Hussain, a grandson of the Islamic prophet Muhammad, the image is unrelated to the 2022 FIFA World Cup.

A 2017 image taken at the inaugural ceremony of a stadium in Iran has been falsely described as being taken during the Iranian football team's first match at the 2022 FIFA World Cup. Therefore, we have marked the claim as false.