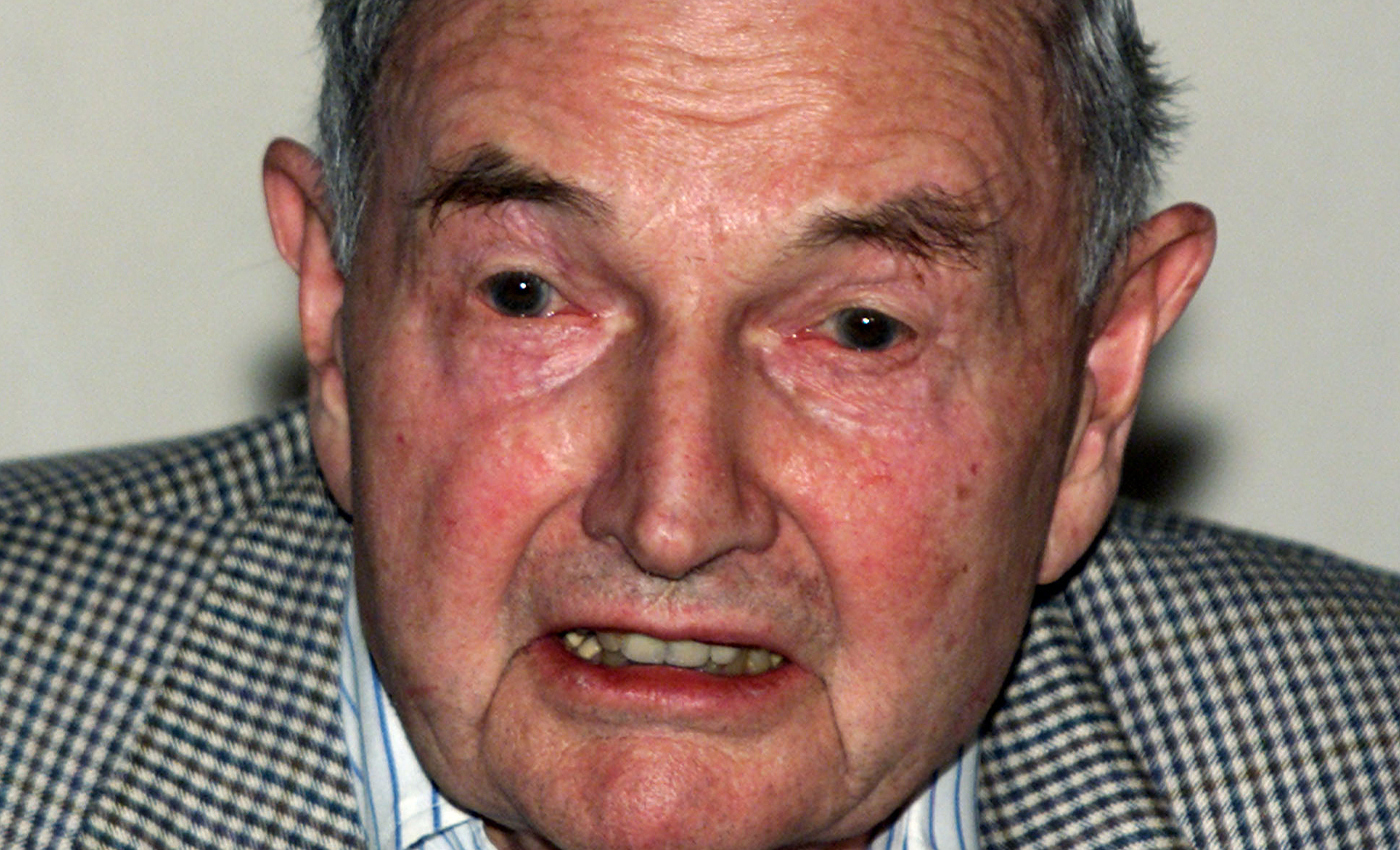 Rockefeller's speech was taken out of context to mislead people. He did not thank the media for helping him take complete control over the world.

The American Banker and philanthropist David Rockefeller and the Rockefeller Foundation have been subject to several conspiracy theories. One such theory claims that Rockefeller was plotting to dominate the world economy by persuading private businesses and ownership. An old video circulating on Facebook among these lines alleged that he thanked media allies for their support in keeping his plan to take over the global economy a secret for several years. The caption read, "1991..Rockefeller says their plans to dominate people via the world economy was only made possible away from the bright lights of the media."

The narrator in the minute-long video claims that in a closed-door meeting in 1991 praised his media allies. We can hear Rockefeller's words, "We are grateful to the Washington Post, The New York Times, Time Magazine, and other great publications whose directors have attended our meetings and respected their promises of discretion for almost forty years. It would have been impossible for us to develop our plan for the world if we had been subjected to the lights of publicity during those years. But, the world is now more sophisticated and prepared to march towards a world government." Further in the video, we can again hear a male voice detailing that Rockefeller wanted to create a world system of financial control given to private companies. The aim was to dominate the political system of every country seeking to control the entire world.

Conspiracy theories about the Rockfeller’s dominating the world started surfacing after a Trilateral commission was formed in 1973 that involved the countries of Western Europe, the United States, and Japan. The nations came together to cooperate and achieve common security, politics, and economic goals. An archive page from the U.S. Department of State notes that the commission was funded by David Rockefeller, where business leaders, academics, and politicians cooperated more closely in defining economic and security problems shared by all three regions to come up with an efficient solution. Former U.S. President Jimmy Carter also served as a member of the commission. It further adds that although the commission did not achieve everything from what was expected, but it strengthened the relationships between the member countries.

The commission has since been subjected to the theories calling it anti-American, anti-democratic, anti-Christian, and anti-worker, and that it is behind the drug trade and rich man's club that operated to establish one world government. These accusations were proven wrong even back in the 70s. A report from Washington Post in 1992 noted that the commission's task force papers are available for the public to read. Its membership list isn't secret. It also writes down other people's opinions regarding the commission, where one can read different sides to the story of how it became a controversial thing.

In relation to the commission, Rockefeller did thank the media in 1991. He addressed the Trilateral commission and thanked the media for discreetly reporting about the commission's meetings. Nowhere in his speech did he state that the commission aimed to dominate the world economy. His speech is mentioned in the book "Social Movements for Global Democracy," published by Jackie Smith, an American sociologist who is a professor of Sociology at the University of Pittsburgh. The 73rd page of the book writes that in the '70s, after the various protests held at the meeting sites of the World Bank, WTO(World Trade Organization), and IMF(International Monetary Fund), several government meetings started to be held in remote places. This was to avoid open economic decision-making that was subject to public scrutiny. It states that such secret meetings were not new and later quotes Rockefeller's wordings thanking the media for maintaining discretion for almost forty years. This indicates that some of the Trilateral Commission's meetings were of such nature, which is why the media was acknowledged. However, this does not prove that this commission was a secret or plotted to take control of the world.

Another Washington Post report from 1978 notes that the commission members got together and mostly talked about how the world could run if all countries cooperated. It says that information about the commission slipped "out from under the mirror-paneled doors at L'Enfant Plaza where the Trilateralists met for three days last week." It quotes columnist Joseph Kraft stating, "They address serious problems in serious ways, one of three journalists admitted as observers with the understanding that they would be discreet in reporting who said what."

Subsequently, there is no such thing as a world government as of now. According to the Stanford Encyclopedia of Philosophy, World government is just a concept or an idea that refers to uniting all humankind under one joint political authority. The proposals for the global political system have been around since ancient times. However, this has been criticized by far-right political adherents objecting to "feasibility, desirability and necessity for global political authority." Furthermore, several other conspiracy theories involving Rockefeller have been previously debunked by Logically. Therefore, it is clear that the commission was not planning for private ownership over the world but instead discussed trade, industrial development, and the economy.

Rockefeller did thank the media for being discreet about the Trilateral commission. Still, it is not related to the falsified narratives that the media hid the commission's plans of "dominating people via the world economy." Rockefeller's Trilateral commission did not foster for controlling the world economy. His speech was taken out of context to spread inaccurate information and propagate baseless conspiracy theories. Hence, we have marked the claim as misleading.

Mark Zuckerberg is David Rockefeller’s grandson, and the Rothschilds own 10% of Meta shares.

A facility has been developed to produce 30,000 lab-grown babies using artificial wombs.