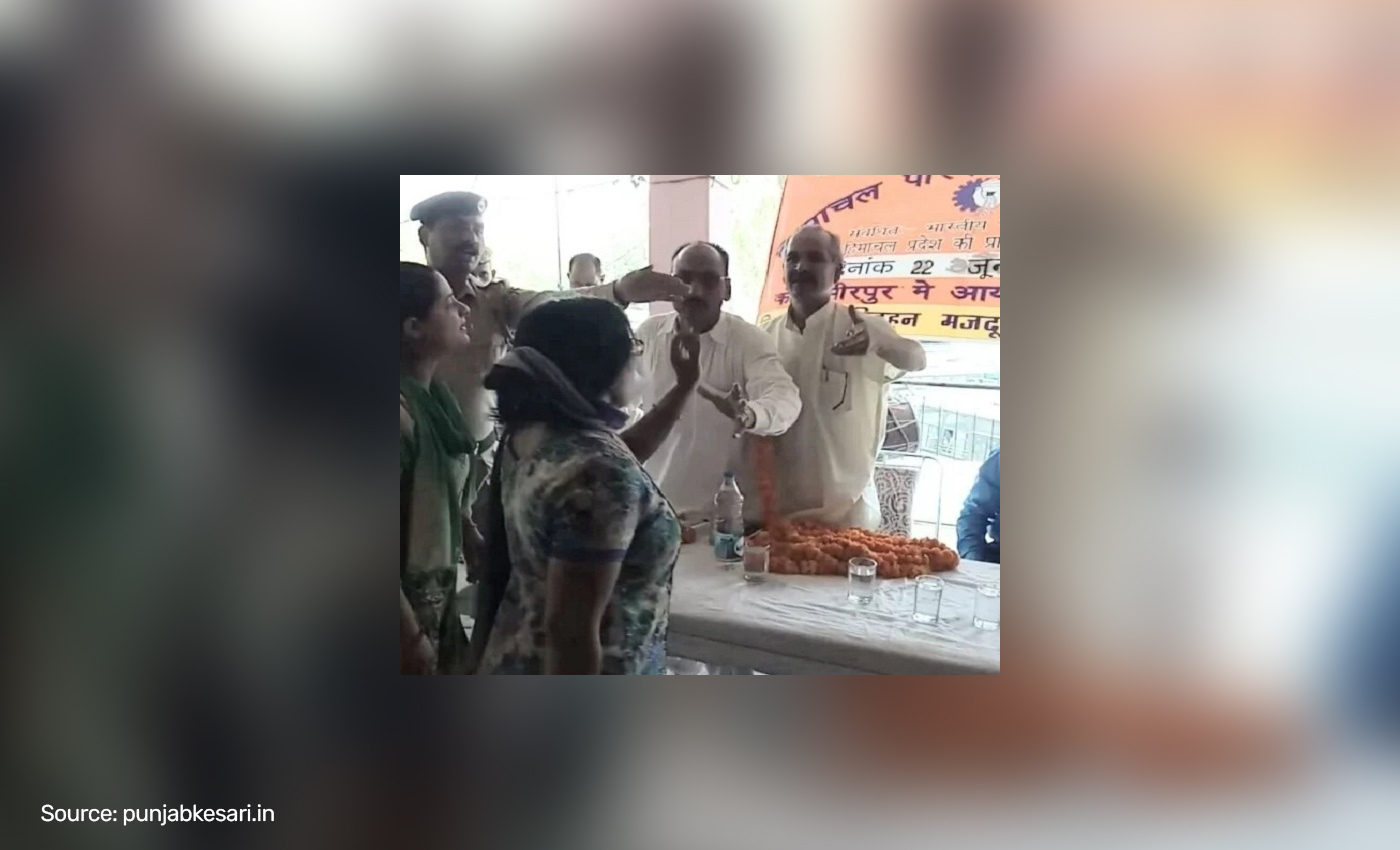 The incident seen in the viral clip took place in June 2018 over a personal matter. Further, the man is not a BJP MLA but a local labor union leader.

A video of one woman garlanding a man as another woman uses that opportunity to take off her slippers and hit the man with them is being shared with the claim that it shows that a Bharatiya Janata Party (BJP) MLA was beaten up by women in Himachal Pradesh. The 30-second clip contains text stating that the incident occurred in the town of Hamirpur and that the MLA getting beaten up was the consequence of the party’s 'jumlebaazi'—false promises. In the video, the woman who hits the man with her slippers is pushed away by one of the men present nearby, and a crowd gathers near those involved. Police officers can also be seen present at the scene. The video is viral on Twitter, with one particular tweet sharing it has garnering over3 4,000 views.

The man being beaten up in the video is not a BJP MLA, and the scuffle was over a personal matter between him and the two women involved.

At the beginning of the video, we noticed a banner behind the dais that read "Himachal Parivahan Mazdoor Sangh" (which loosely translates into ‘Himachal Transport Laborer’s Union”) with the date June 22, 2018. We surmised, therefore, that this was an event held in June 2018 by the labor union. On searching for news reports with related keywords, we found an article from June 22, 2018, by the Himachal Pradesh edition of Punjab Kesari about this incident. According to this report, which carried visuals from the viral clip, the man seen in the video was the then-state president of the Himachal Road Transport Corporation (HRTC) labor union, Shankar Singh. The report further said that the women, who were HRTC bus conductors, were angry with Singh because he had held a phone conversation with another woman bus conductor, in which aspersions had been cast on their characters. The women alleged that he had then made this audio clip go viral, because of which they thrashed him and demanded an apology from him. However, Singh denied the accusation but accepted that he had had such a conversation with another conductor.

On YouTube, we also found a video news report on this incident published by VTV Gujarati on their verified channel. The video, uploaded on June 23, 2018, was titled "HRTC Employees union leader Shankar Thakur beaten with Slipper in meeting" and carried the same visuals as the viral clip. According to this report, the labor union in Himachal Pradesh had organized the program where two female conductors hit the labor union's leader Shankars Singh with their slippers. The report added that this happened because he allegedly made vulgar comments about them while talking to another female conductor, and his audio went viral making the other two women furious.

We also came across another video news report by HTODAY NEWS CHANNEL HAMIRPUR, which also stated the same thing as the other reports. This also carried bytes from the two women conductors themselves, who alleged that Singh and the other women conductor, Sonu, had made baseless accusations about them on a call. According to the women, Singh and Sonu had discussed that the two women took time off from work to go and make food at the residential quarters of the district magistrate, a charge which they vehemently denied. In this report, they demanded that Singh tender an apology and reverse the damage done to their reputations. The video carried a byte from Singh, who claimed that the women had begun abusing him and beating him because he refused to be garlanded by them and accused them of having come to the event only to disrupt it.

We also found that Narinder Thakur was the sitting BJP MLA of Hamirpur in June 2018, who is certainly not the man seen in the video. It may be noted that the same clip was also viral in 2018 with the same claim. It has resurfaced now, despite being fact-checked by several outlets. Assembly elections are going to be held in Himachal Pradesh soon and surfacing of false claims is likely to increase in this backdrop.

A video of a woman employee of the HRTC beating up the state president of the labor union for allegedly making an objectionable audio clip go viral is being shared with a false spin. The man seen being thrashed is not a BJP MLA, and the incident did not take place over "false promises." We have therefore marked this claim false.

VTV Gujarati News and Beyond