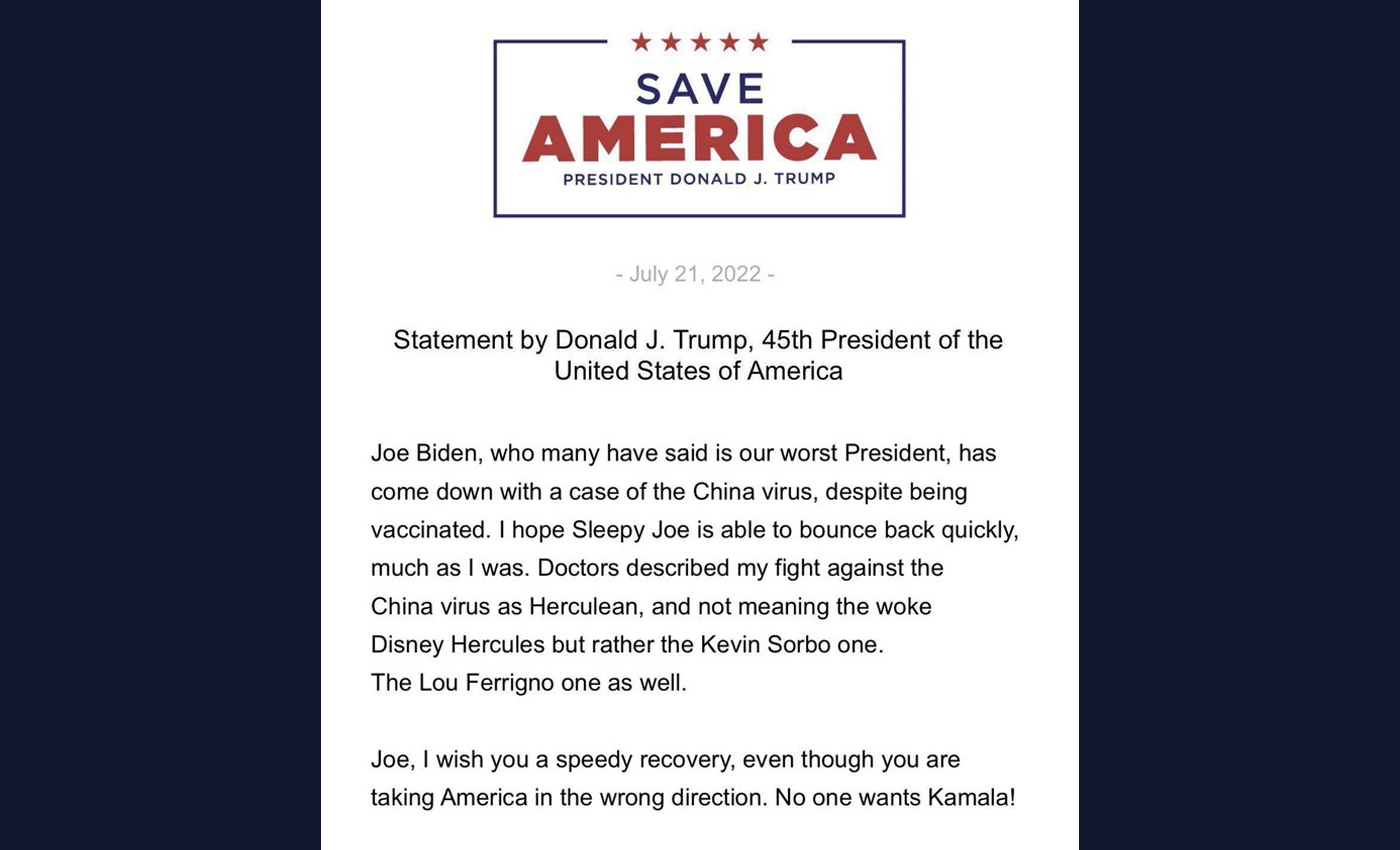 Donald Trump's Director of Communication confirms the statement is fake. There are no reports to corroborate Trump wished Biden a speedy recovery.

On July 21, 2022, White House Press Secretary Karine Jean-Pierre announced that President Joe Biden tested positive for COVID-19. After the announcement, many misleading and false posts regarding President Biden’s health started circulating on social media, some claims even mentioned former U.S. President Donald Trump's statement on Joe Biden's health. One such post was from one Twitter user Diane N Sevenay who tweeted a statement claiming it to be from Trump. The post description read, "Former President Trump weighs in on President Biden's illness." In the statement, Trump allegedly mentions, "Joe, I wish you a speedy recovery, even though you are taking America in the wrong direction. No one wants Kamala!” The statement also makes remarks about the nature of Biden’s presidency.

However, no such public message was sent by Trump to Biden. Neither Trump nor the White House officials have confirmed the existence of such a public message.

On July 22, 2022, Director of Communications for Save America and Donald J. Trump, Taylor Budowich's tweeted that the circulating statement from Trump on Biden wasn’t genuine. He mentioned, "This is a fake statement, purporting to be from Save America/President Trump, FALSE. It was obviously designed by some prankster."

CNN reporter Daniel Dale also tweeted that the statement was fake and was not released by Trump.

Donald Trump's official website also does not contain any such statement about U.S. President Joe Biden's health issues. The social media accounts of Donald Trump are suspended, and he only communicates with media outlets and others by email or through a social media platform created by him. However, no media report has confirmed a message from Trump to Biden on the latter’s health.

According to The Hill, most of Biden’s allies and critics, including Senate Minority Leader Mitch McConnell (R-Ky.) and Sen. Rand Paul (R-Ky.), Sen. Marsha Blackburn (R-Tenn.), and Sen. Ted Cruz (R-Texas), and others, wished the President a speedy recovery. But former President Trump had not made any statements on the 46th President's health.

Trump's spokesperson dismissed the viral statement, and there are no reports publicly available on this matter. Hence, we concluded that the claim is false.