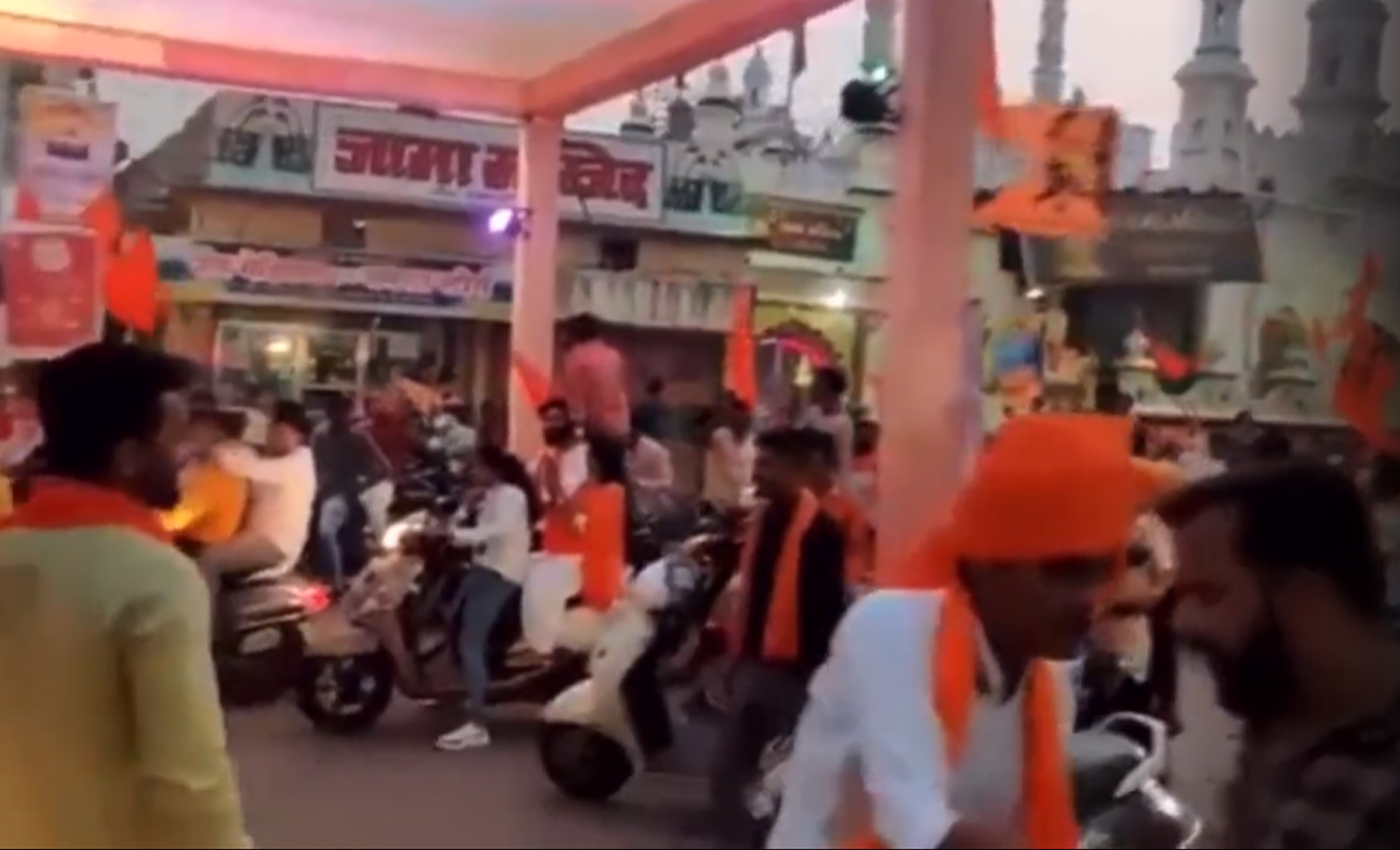 A video of the Jai Shri Ram rally near a mosque in Chhattisgarh has been falsely shared as a mosque being pelted with stones in Mulbagal, Karnataka.

On April 2, 2022, a stone-pelting incident occurred at a bike rally organized by Hindu activists in Karauli, Rajasthan, on the occasion of 'Nav Samvatsar,' the first day of Hindu New Year. Social media was filled with several false and misleading posts following the incident. One such video on social media was posted on April 9, 2022, by user @cjwerleman, with the caption, "Hindutva terrorists carried out stone-pelting attacks against mosque in Mulbagal, while also committing physical attacks on Muslims." The video depicts people waving the saffron flag while moving between vehicles in front of a mosque. Also, the Islamic call to prayer, adhan, can be heard coming from a mosque in the background. However, the video is false because the video is from Chhattisgarh, not Mulbagal, Karnataka.

Many media organizations have called out C.J. Werleman as a fake news and misinformation peddler. His Twitter account mentions that he is a Global Correspondent for Byline Times and an activist against Islamaphobia.

By closely monitoring the video, we found signs and billboards in the video were written in Hindi, whereas in Karnataka, most of these would be written in Kannada. The mosque was written as Jama Masjid, and the police station was written as Basantpur Police Station, Rajnandangoan on the signs observed in the shared video. Through a keyword search, we found the Jama Masjid location in Rajnandangoan, Chhattisgarh, on Google Maps. We compared keyframes from the video with an image on Google Maps for Jama Masjid, which confirmed the location and structure of the mosque observed in the shared video. Hence, the video was from Rajnandangaon, Chhattisgarh.

A YouTube channel, Chaitanya, posted a video with the caption "Jai Shree Ram Raily Rajnandangaon" on April 5, 2022. In the 9-minute video, we can locate the same mosque observed in the video shared by CJ Werlemen. Also, it shows people waving the saffron flag while moving in between vehicles and chanting Jai Shree Ram outside the mosque, but no stone-pelting incidents were observed in the video.

It is true that there was a stone-pelting incident that took place on the occasion of the Ramnavmi in Mulbagal, Karnataka, on April 8. Police said that Sri Rama Shobha Yatra, a procession, was organized for the occasion of Ramnavami, and it took place in the afternoon, starting from Shivakeshava Nagar. When the procession reached Jahangir Mohalla at around 7.40 pm, there was a power cut in the area. At this moment, offenders pelted stones at the idol of Ram. Many vehicles were damaged during the incident, and prohibition orders were placed in the city to control the situation, The Indian Express reports. However, this incident is unrelated to the Jai Shri Ram rally in Chhattisgarh.

The video of the Jai Shri Ram rally organized in Chhattisgarh was misattributed to the incident in Mulbagal, where there were reports of stone-pelting. Therefore, we mark this claim as false.

A video shows people in Varanasi celebrating after a Shivling was discovered in the Gyanavapi Mosque.