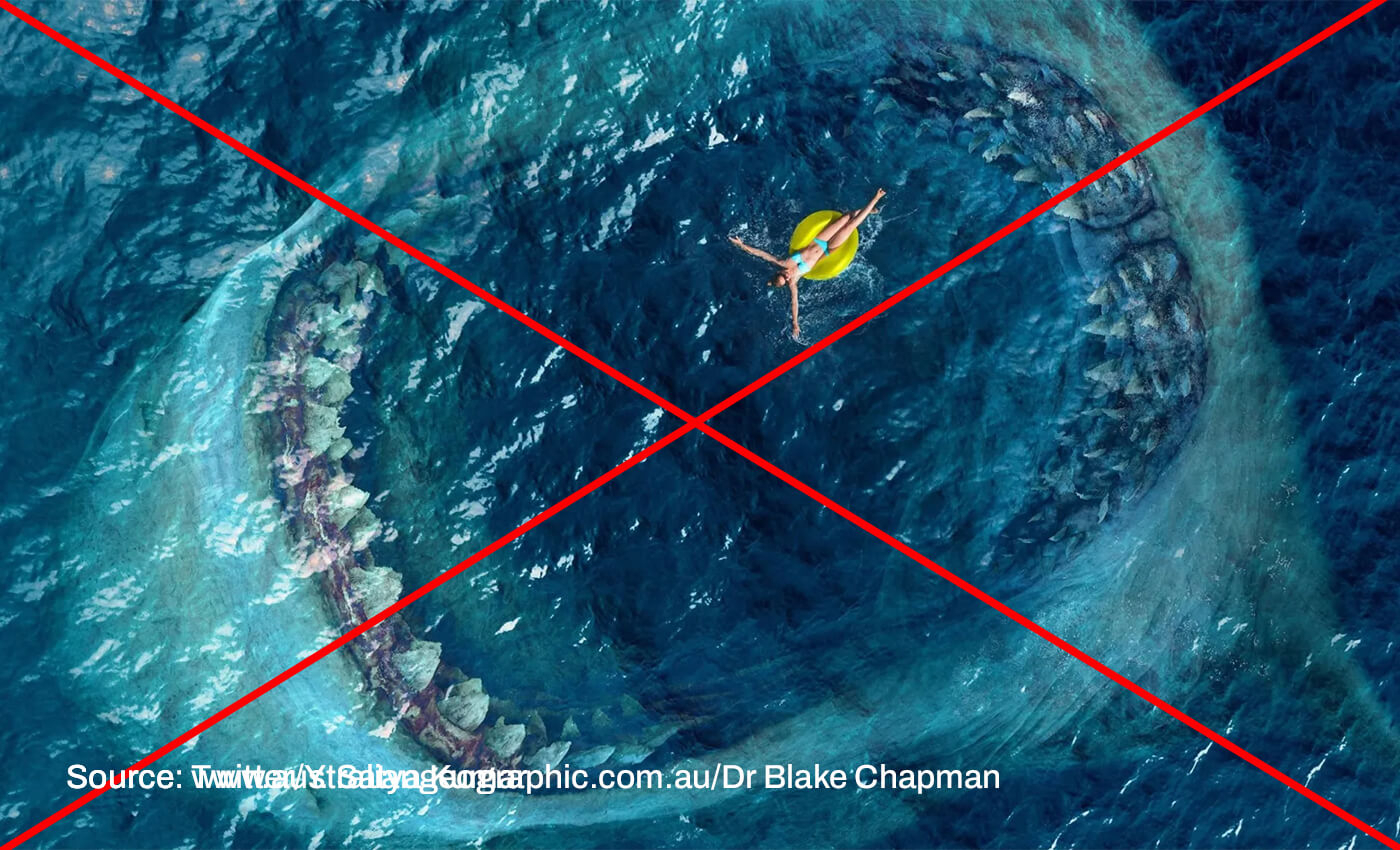 The megalodon is extinct, and Antarctica is not an ice wall.

A video on TikTok claims that the pre-historic Megalodon shark was caught on camera after it swam past the Antarctica ice wall into Earth's waters. The creator describes how an ice wall separates the known from "the world beyond," where the rich live alongside pre-historic animals and dinosaurs, and new landmasses exist, such as Asgard and Atlantis. According to the creator, there is no one who can prove that it is a theory, but no one can prove that it is not a theory either. Those who attempt to prove it would most likely be killed. Later in the video segment, we can see a group of divers in a shark cage and footage of a great white shark swimming toward the cage. Suddenly, a larger black shark comes up from underneath, snatches a fish, and swims away, proving – according to the video's creator – that it was a Megalodon shark, because it was four to five times the size of a regular great white shark.

The video is a combination of three fairly common conspiratorial claims: that Antarctica is an ice wall, that a new world lies beyond the ice wall, and that the megalodon is still alive. Believers in the flat earth conspiracy theory have argued that Antarctica is not a continent but is, in fact, an ice wall containing the world's oceans. They have tried to prove this by sailing to the so-called Antarctica ice wall. The Flat Earth International Conference (FEIC) publicized the information that the cruise would take place in 2020, according to Live Science. The cruise did not happen due to the COVID-19 pandemic and has yet to be rescheduled.

The map used by the creator of the TikTok video to show the ice wall and the supposed world beyond was originally uploaded on the fan art website Deviantart back in 2021, by user Ohawhewha. Ohawhewha states in the description of the map that they do not believe in the flat earth theory and that the map is part of a fictional world-building project. The map was created as a resource for other creative people to use for their projects.

Regarding the creator's claim that the "world beyond" theory cannot be proven or disproven, there is an overwhelming amount of evidence proving that Antarctica is not an ice wall nor that a new world is hidden behind it. For example, one can watch a live stream of Earth from the International Space station. Additionally, the Earth was proven to be round some 2200 years ago, when the Greek mathematician Eratosthenes first calculated its circumference.

The supposed footage of the Megalodon shark is from a Discovery Channel special episode of the show Shark Attack, called Megaladon: New Evidence, which aired in 2014. The episode was the second of two fictional documentaries about the return of the prehistoric Megalodon. The Discovery Channel was heavily criticised by scientists for the realistic tone of the episodes.

Considering the overwhelming evidence, we have concluded that this claim is false.