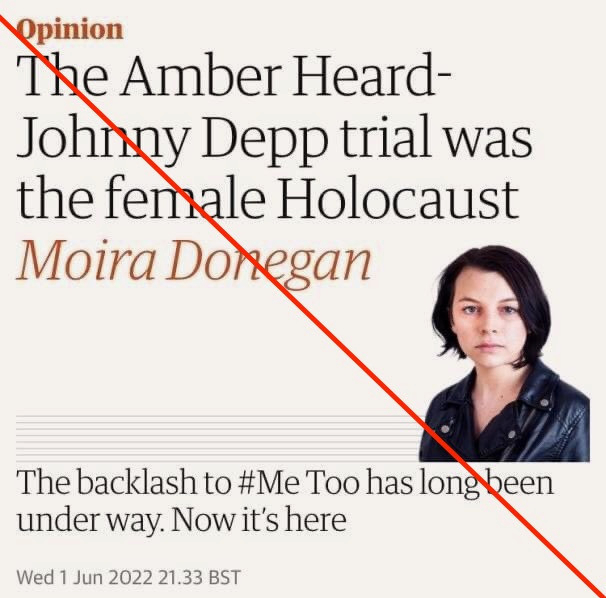 A digitally altered photo of a headline from a Guardian article was falsely attributed to the newspaper and shared on social media.

On April 12, 2022, actors Johnny Depp and Amber Heard went on trial in a defamation case brought by Depp over a Washington Post article written by Heard in 2018. On June 1, 2022, the jury found Depp had been defamed by the article and awarded him $15 million, while Heard was also found to have been defamed by Depp, and was awarded $2 million, the Washington Post reported.

From the beginning of the trial, there have been many memes and posts spreading misinformation regarding the case. Recent social media posts claim that the Guardian published an article by Moira Donegan with the headline "The Amber Heard-Johnny Depp Trial was the female holocaust." The post had a photo of the purported headline and Donegan's face at the bottom.

Donegan tweeted on June 3, stating that the screenshot of her article was fake. Her tweet read, "Someone photoshopped a fake headline for my piece about the Depp trial to make it look incendiary and dumb, and now it’s gone viral as fact and lots of credulous Depp supporters are yelling at me about it. Proving, of course, that they’re not at all susceptible to disinformation."

The photo in the social media post altered the headline of the article. The original article was an opinion piece that does not refer to a female holocaust but instead discusses how the Depp-Heard trial was misogynistic and unfair.

A juror in the Depp v. Heard case uploaded videos, sharing his account of the defamation trial.