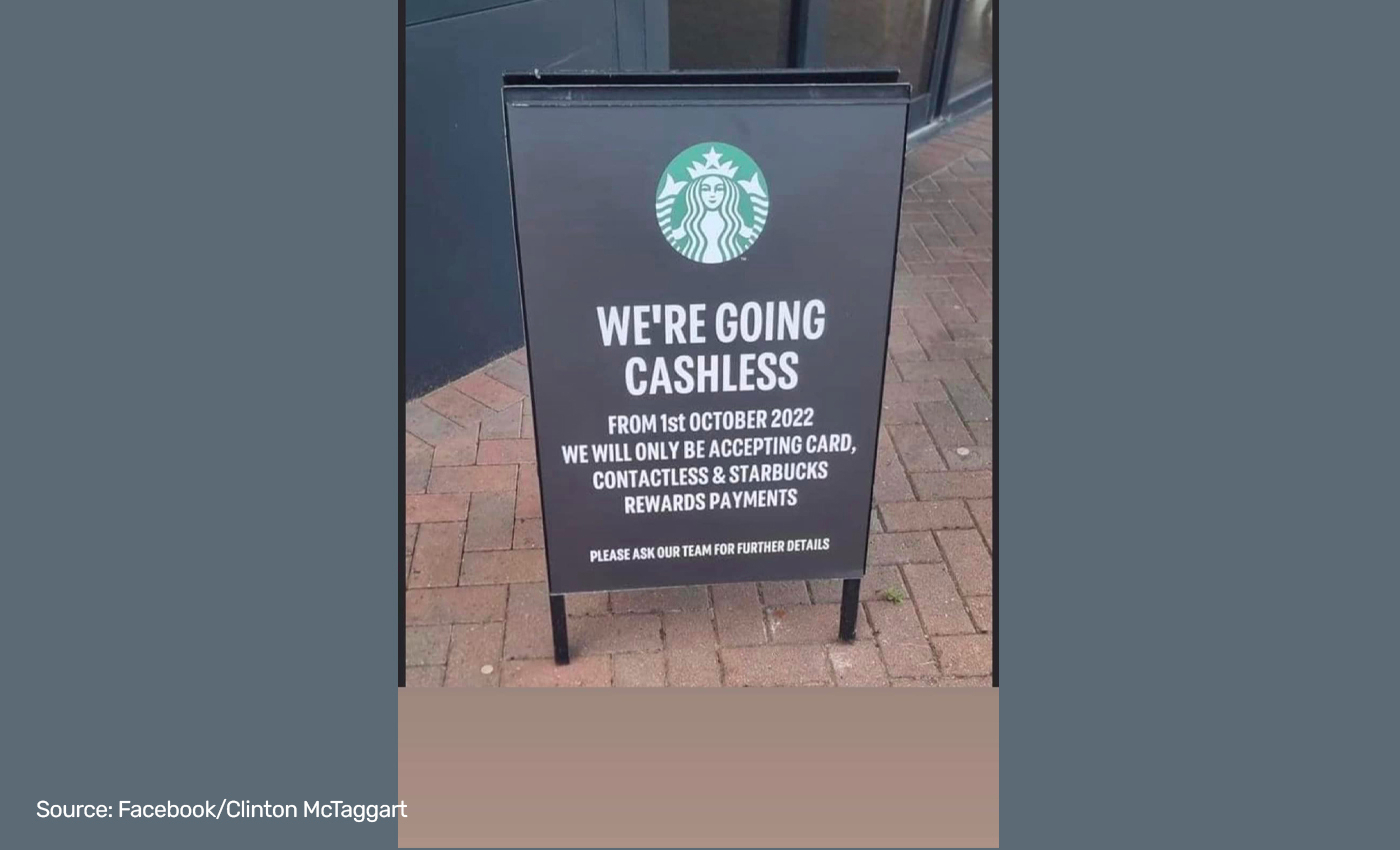 While some franchises may choose not to accept cash, not all U.K. outlets will adopt the practice, Starbucks U.K. clarified.

In late August 2022, a claim that all Starbucks outlets in the U.K. are going cashless from October 2022 spread on social media after a signboard from one of the outlets was captured and shared online. The board bearing the Starbucks logo states, "we're going cashless. From October 1, 2022, we will only accept card, contactless & Starbucks rewards payments. Please ask our team for further details.''

In response to reports that the U.K. Starbucks coffee shops will stop accepting cash, the multinational chain of coffeehouses and roastery declared on its U.K. Twitter account on August 30 that while individual Starbucks franchises may choose not to accept cash, claims that all of its U.K. outlets will follow the same from October are unfounded. The statement reads, "Starbucks has no plans to go cashless across our U.K. stores. We operate alongside various licensee business partners in the U.K., so this may vary from store to store and the majority of our stores continue to offer cash payment options.'' Similarly, a tweet from the Starbucks Care account disputed the claim that its outlets in the U.S. and Canada would go cashless.

Even on its website, Starbucks states that cash is "always an option." A Starbucks representative told The Associated Press that the company wishes to end any misinformation or rumors regarding its U.K. locations and stores in the U.S. and Canada being cashless. The spokesman categorically stated that the cashless reports were false.

Kevin Johnson, Starbucks' then-CEO, announced in a letter to "Starbucks partners and consumers" in May 2020, after the coronavirus outbreak, that the firm would move toward more cashless experiences because it was aware that handling cash raises consumer concerns about the risk of infection. Yet, the firm seemed to have no intentions to implement a cashless policy in the U.K. anytime soon, at the end of August 2022.

While some social media posts that featured the signboard criticized Starbucks for making this decision and advocated a boycott of the brand, several other posts connected it to the conspiracy of a cashless world. One such Facebook post's caption read, ''A year ago a cashless society was only foreseen by 'conspiracy theorists' but ladies and gentlemen here we go....'' Such conspiratorial narratives are also found on social media platforms, including Twitter and TikTok.

The above viral claim was propagated as part of an unfounded conspiracy theory about the New World Order. Several posts featuring the signboard said these cashless transactions are associated with broader conspiracies involving the global elites whose ultimate purpose is to take over the lives and enslave the global populace. The conjecture in these conspiracy theories suggests the elites want "an authoritarianist dystopia". Some posts even mentioned that the conspiracy theory was coming true, referring to the signboard. Believers of conspiracy theories such as a cashless society and humanity being controlled through a one-world government would seek signs and messages that this is unfolding worldwide. These harmful theories have anti-semitic origins, leading to real-life consequences.

Previously, Logically debunked a claim that said, ''Digitalizing the economy supports the New World Order that seizes control of people's lives.'' Our fact check found that Dr. Pippa Malmgren's statements were taken out of context as she discussed the future of money being digital and how it could benefit the world. Her remarks were misinterpreted to support the New World Order conspiracy theory.

Multiple independent fact-checkers, including the Associated Press, have debunked misinformation on Starbucks going cashless in the U.K.

Starbucks stated that there is no blanket prohibition on cash at its U.K. outlets and that there are no plans to go cashless in response to claims that all of its coffee shops in the U.K. are about to become digital. However, they specified that certain stores would have specific policies since they work with franchise partners. But, most of Starbucks' U.K. establishments still accept cash payments. Therefore, we rate the claim as misleading.