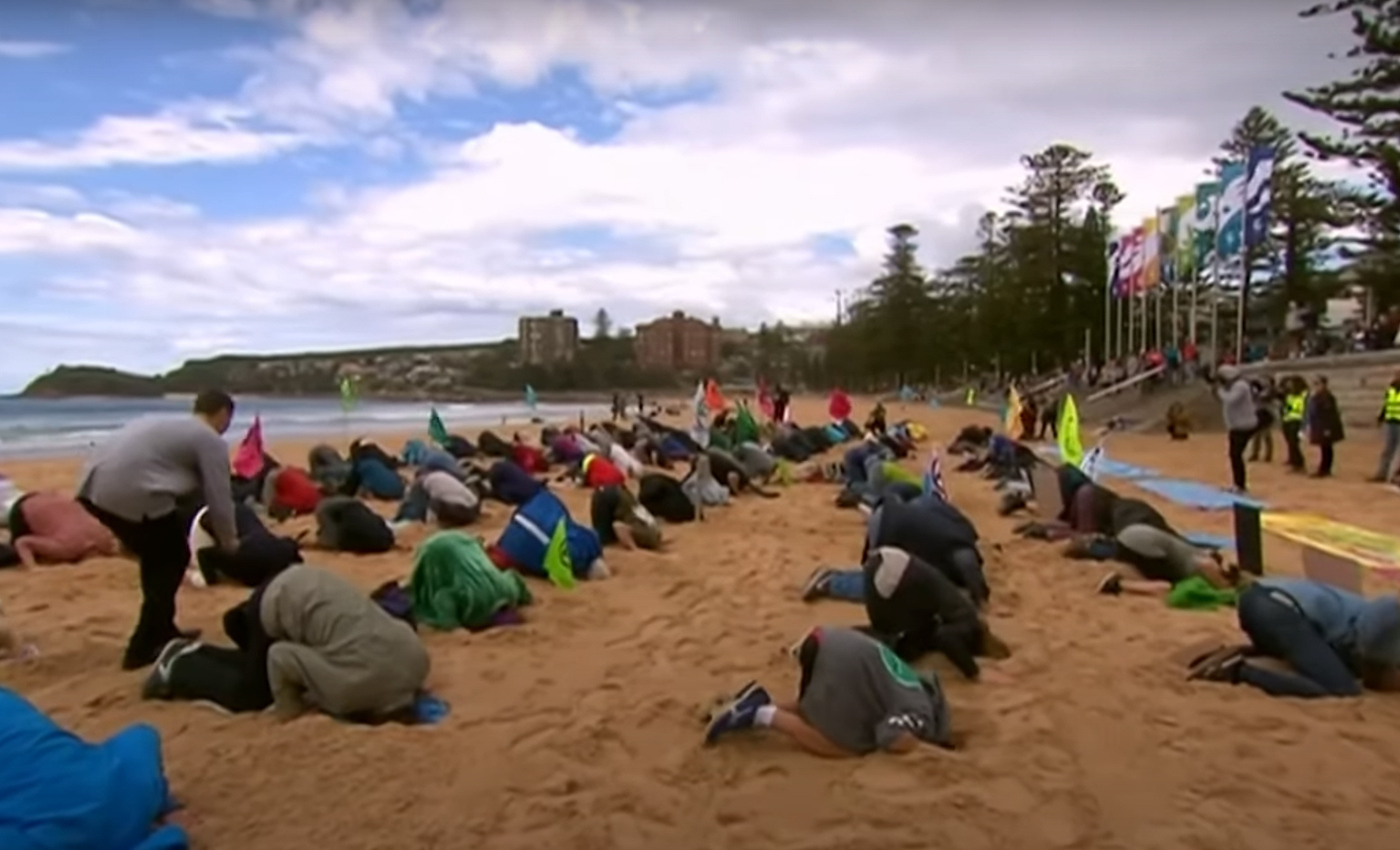 The protest was organized by Extinction Rebellion climate activists in 2019. It was not led by Thunberg to reduce CO2.

A protest video showing a group of people burying their heads in the sand on a beach has been widely shared on social media. The caption for the video reads, "Greta Tunberg organized a protest against CO2 emissions, forcing a crowd of her followers to put their heads in the sand and not breathe, thus cleaning the planet of the carbon dioxide that is exhaled." The video has also been shared on Facebook and YouTube under the same context. A Russian website named KONT also shared it claiming Thunberg's protest action was based on "playing ostrich” (translated).

A reverse image search of a screenshot from the video led us to an original YouTube video posted on October 11, 2019, by the American broadcaster Voice of America (VOA). The video caption states that climate activists buried their heads in the sand on Sydney's Manly Beach as an organized action against climate change as part of the Extinction Rebellion global movement.

Extinction Rebellion describes itself as "an international, politically nonpartisan, decentralized movement that uses nonviolent direct action and civil disobedience to persuade governments to act with justice in the Climate and Ecological Emergency." The Extinction Rebellion symbol can be seen on the colorful flags in the widely shared video.

Also, we found a Facebook event page of this movement, where a profile scan led to a call for the demonstration on October 11, 2019, at Manly Beach, Sydney, Australia. Contrary to what viral posts about "stop breathing to emit CO2" suggest, event organizers described in the post: "On the beach, we'll dig a hole in the sand big enough to stick our head in and keep breathing." Images of the protest were also shared on the same Facebook page.

An article published by News.com.au reported the demonstration, stating that about 150 protesters buried their heads in the sand for a minute to raise awareness about climate change and persuade Australian governments to declare a "climate and environmental emergency."

According to CBS Colorado, Thunberg was in Denver on October 11, 2019, where she led a climate protest. The Swedish activist reportedly traveled to the U.S. two months earlier to raise awareness about climate change campaign.

The video in question shows the climate protest organized by Extinction Rebellion on an Australian beach on October 11, 2019. Greta Thunberg led a climate protest in an American city on the same day. Apart from being climate protests, there is no connection between the two events. Hence we have marked this claim as false.

The pizza boxes in Andrew Tate's response video to Greta Thunberg were instrumental in his arrest.

The European Union has introduced a personal carbon credit system.