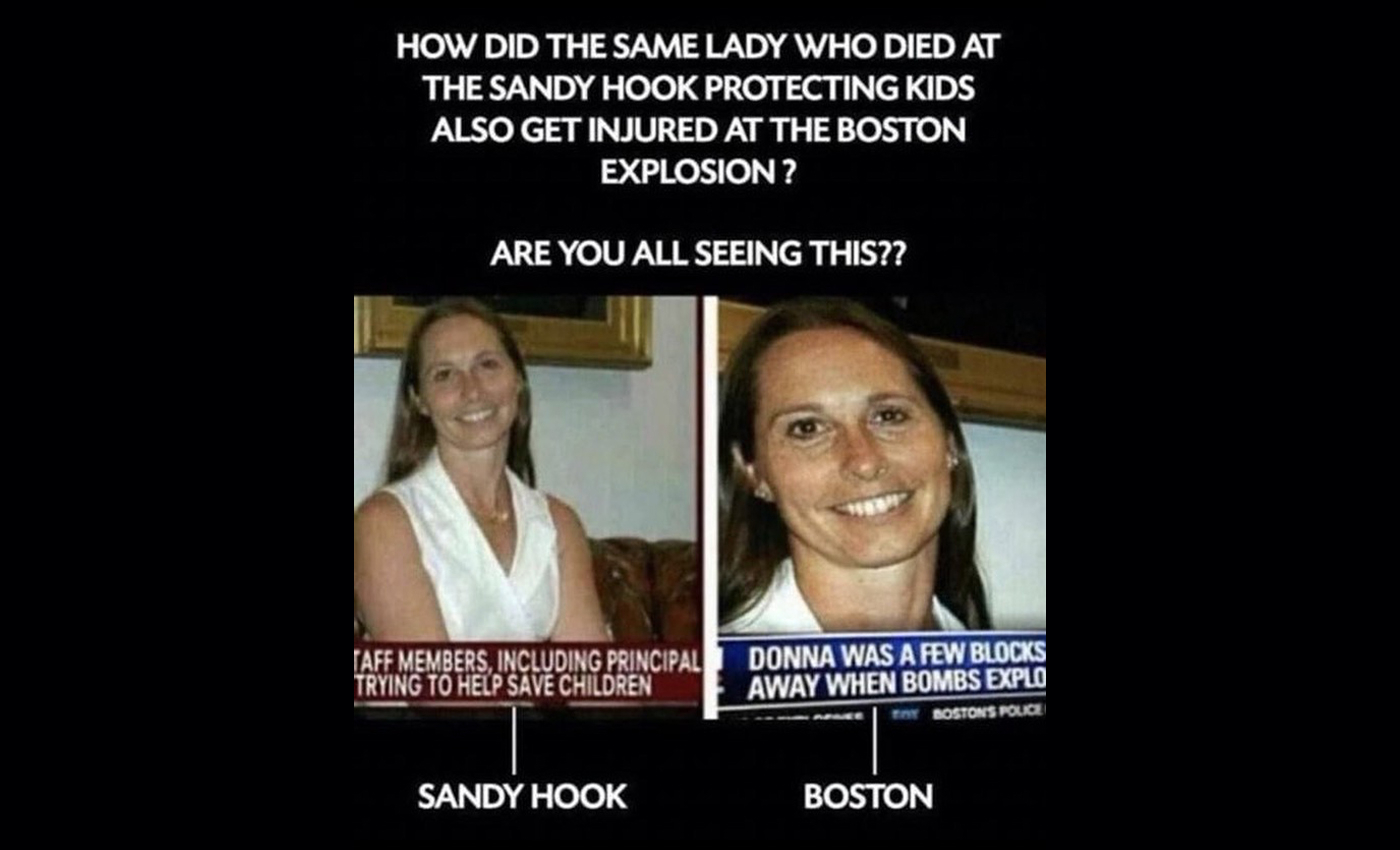 An image of one of the victims of the 2012 Sandy Hook shooting has been falsely labeled. The media did not reuse her image during the 2013 attack.

Frequently in the aftermath of mass shootings or any other disasters, claims that the victims are "crisis actors," or that the incidents are a hoax, circulate on social media. A recent Instagram post made this claim using 2012's Sandy Hook Elementary School shooting and the 2013's Boston Marathon bombing. The post included two identical images of a woman wearing white attire depicted in two different television news reports. According to the post, the left one illustrates the coverage of the Sandy Hook shooting, and the right one the Boston Marathon bombing. The image went viral on conspiracy discussion channels, Facebook, and other websites, with captions ''This lady died in the Sandy Hook Elementary School shooting and again in the bombing at Boston.”

Conspiracy theorists used the composite image to claim that the U.S. government pre-planned the incident and that the Sandy Hook shooting was orchestrated. Furthermore, it was alleged that the lady in the image was a crisis actor since her picture appeared in two different news stories. However, the allegations and claims are false.

Both images in the viral collage appear to feature Dawn Hochsprung, the late principal of Sandy Hook Elementary School. According to USA Today, during the Sandy Hook Elementary School shooting on December 14, 2012, Hochsprung was killed when she lunged at the shooter. The supposed media description at the bottom left of the composite viral image purports to be news on the Sandy Hook shooting. The visible description in the photo reads that staff members, including the principal, were trying to help save children.

Three people were killed and many were injured when two bombs exploded at the Boston Marathon on April 15, 2013. The purported media description at the bottom right of the composite viral image does not accurately show the headlines. It states ''Donna was a few blocks away when bombs exploded." There is nobody named “Donna” among the people who died at the bombing. When this claim and image originally emerged in 2013, fact checking organization Snopes found that the news headline likely was referring to an interview with a witness named Donna, not a victim.

Furthermore, there is no evidence that the news media disseminated Dawn Hochsprung's image to claim she was alive at the time of the Boston Marathon bombing. The same image of Dawn Hochsprung has likely been digitally altered and used in the photo shared on Instagram to demonize the mainstream media and to kickstart another conspiracy theory.

Conspiracy theories and false information have been spread about the Sandy Hook shooting. According to a report in The Conversation, ''How conspiracy theories in the US became more personal, more cruel and more mainstream after the Sandy Hook shootings,'' the massacre served as a prime example of how extreme beliefs can spread on social media and gain support from influential people, even when the conspiracy theory targeted the bereaved families of students and school personnel killed in the shooting. It illustrated how false information propagated on social media could have real-world adverse consequences.

Furthermore, the Instagram post is similar to the purported image of a crisis actor that went viral in the backdrop of the Russian invasion of Ukraine in February 2022. Logically has debunked that claim as unrelated images were used to show that crisis actors were used by media organizations to gain public attention and sympathy.

Dawn Hochsprung was killed in the Sandy Hook Elementary School massacre in 2012. The claims that she was alive during the Boston Marathon bombing a year later and that she is a crisis actor are unfounded. There is also no evidence that Hochsprung was portrayed as “Donna” or as victim in media narratives of the 2013 Boston Marathon bombing. Therefore, we have marked this claim as false.