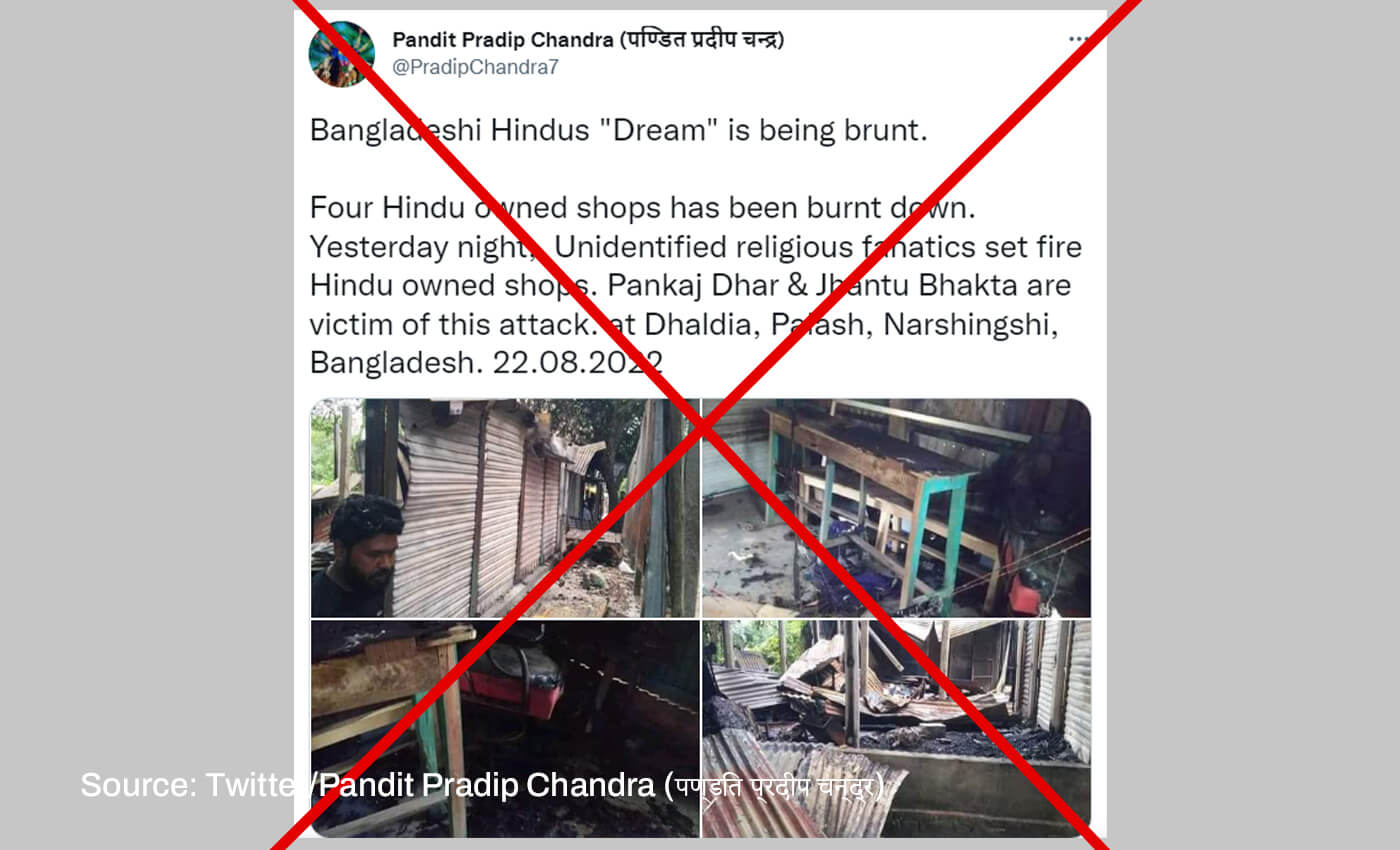 The cause of the fire has been identified as an electrical short circuit. Images of the incident have been circulated with a false communal narrative.

Communal violence in Bangladesh deepened in 2021 after a group of Muslims instigated violence against Hindus during the Durga Pooja festival. The Guardian reports that dozens of Hindu temples were attacked, and at least seven died in the disturbances. It adds that about 150 Hindus were injured and two killed in the incident. Since then, several videos and images have spread on the internet, where they are attributed to or circulated with a communal spin, linked to unrelated incidents. One such post on Facebook, Twitter, and KOO carries images of recently burnt down shops. The Twitter post reads, "Bangladeshi Hindus "Dream" is being burnt. Four Hindu-owned shops have been burnt down. Yesterday night, Unidentified religious fanatics set fire to Hindu-owned shops. Pankaj Dhar & Jhantu Bhakta are victims of this attack in Dhaldia, Palash, Narshingshi, Bangladesh. 22.08.2022."

Upon conducting a reverse image search with relevant keywords, we found no communal angle to the recent incident involving shop fires. Amar Sangbad, a local daily newspaper in Bangladesh, reported that four shops burnt down in Dhaladia Bazar of Ghorashal Municipal area of ​​Palash, Narsingdi, on August 21, 2022. The incident occurred around 3:30 pm, and the victims claimed they suffered a loss of around 8 lakh rupees. The report adds that before assistance arrived, the fire had spread to around four shops, and goods – including grocery and poultry feed – were destroyed.

The Narsingdi Times, a local Bangladeshi media outlet, quoted Sadiqul Bari, Senior Station Officer of Palash Upazila Fire Service: "The fire is initially believed to have started from an electrical short circuit." He added, "two units of Palash quickly reached the spot after receiving information about the fire at night and brought the fire under control after trying for an hour." Another report by Amader Shomoy, a Bengali language daily newspaper from Bangladesh, noted that according to locals, the fire started from a shop in the market at night and spread across the three other outlets before the services could arrive. None of the reports indicate a narrative of deliberate arson attacks.

A fact check by Rumor Scanner, a Bangladeshi fact-checking initiative that contacted Mr.Bari, added, "The electric lines used in these shops are pulled from the house. After dousing the fire, we did not find any torch coil or anything like that while searching for the cause." He added, "We also question the victims whether this was done because of any enmity or not? They also denied that. So initially, we think that since the electrical lines of the shops are not safe, the fire may have started from here." The fact check additionally included a statement from Palash Police Station Officer-in-Charge (OC) Mohammad Ilyach, who also denied the involvement of any individuals in the incident, rather than the only possible reason being the electric shock circuit.

Some far-right groups in India have shared the fire incident in Bangladesh with a communal angle, implying that Hindus living in Bangladesh are under threat. These narratives have been shared on social media platforms like Twitter and Koo. However, these narratives are baseless as none of the reports indicate arson or communal hatred. Similar instances of accidental fires have been misquoted and shared on social media platforms under the pretence that Bangladeshi Muslims are deliberately setting fire to commercial shops owned by Hindus. Alt News debunked this narrative in early August 2022 and found no communal angle to the incidents.

Although the images are from an accidental fire in Palash Upazila, Narsingdi, the reason for the accident has been misinterpreted to spread a false communal narrative. Hence, we have marked this claim as false.

The Sarco assisted suicide pod has been cleared for legal use in Switzerland.