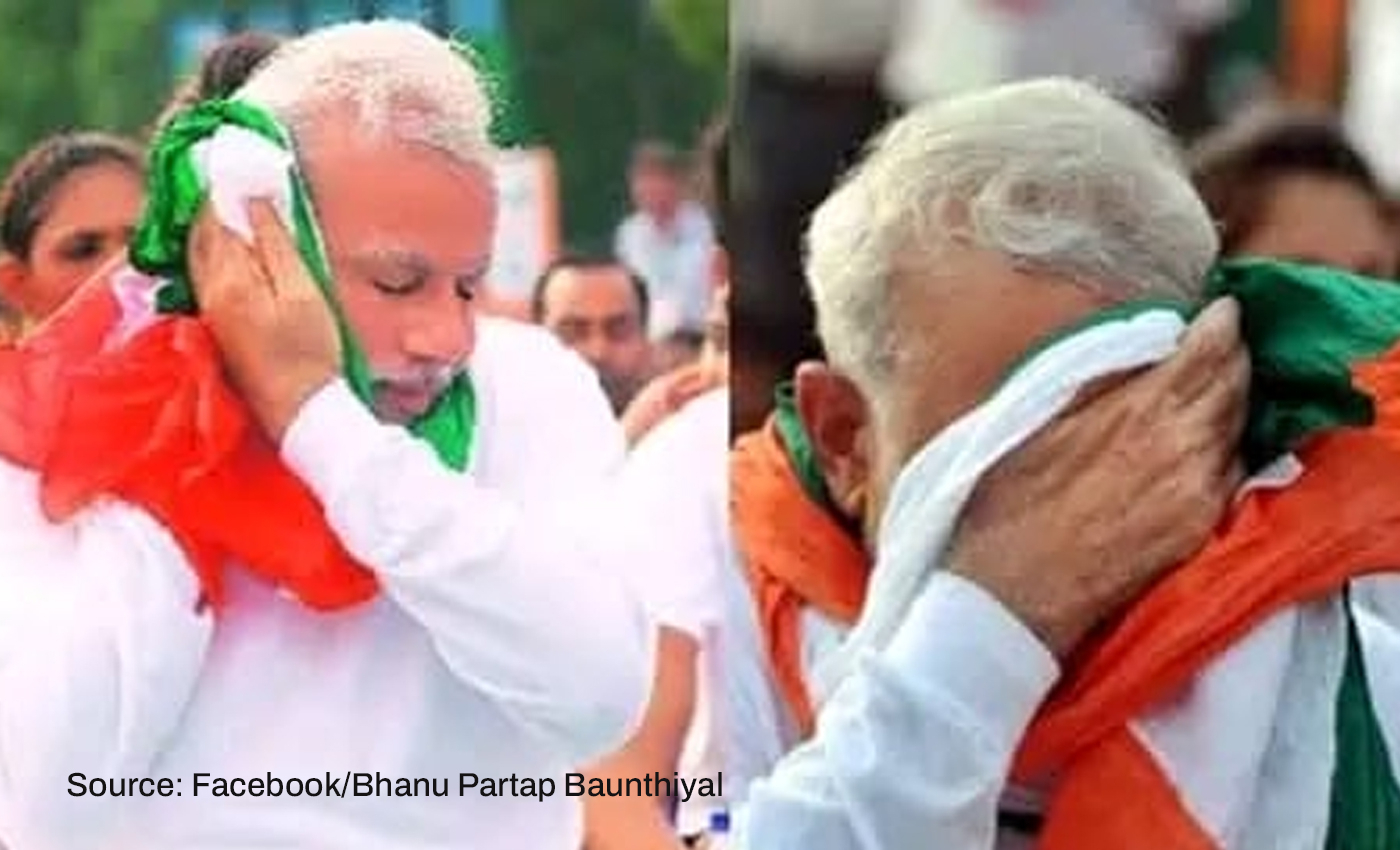 The PM does not seem to be wearing the Tricolor but a stole with the same set of colors as the National Flag during 2015 Yoga Day celebrations.

As the 75th anniversary of India's Independence comes closer, the Bharatiya Janata Party-led central government is aggressively promoting its ‘Har Ghar Tiranga’ campaign, which pushes for displaying the national flag outside every Indian home from August 13 to 15. Amidst preparations, false information about the misuse of the Tricolor by BJP leaders is being shared on social media platforms. A Facebook user posted a montage of two images of Prime Minister Narendra Modi wiping his face with a tricolored piece of cloth. The Facebook post claimed that Modi had disrespected the “flag” by using it to wipe the sweat off his face.

The photos are from the International Yoga Day celebrations held in New Delhi on June 21, 2015. One of the photos was clicked by an Indian Express photojournalist. The event was covered by several Indian and international news outlets. However, no news report mentioned that the prime minister was wearing the national flag as a stole and used it to wipe off sweat.

Pictures from the 2015 event have been repeatedly used to attack Modi for allegedly “insulting” the flag. There is no photograph whatsoever to confirm that the cloth he used was the Tricolor. Neither of the photographs published by news outlets show the National Emblem on the cloth without which the Indian flag is incomplete. The Prime Minister was most likely using a stole or a dupatta with the same colors as the national flag—saffron, white and green.

The Prevention of Insults to National Honour Act, 1971, prohibits the use of the National Flag “as a portion of costume, uniform or accessory of any description which is worn below the waist of any person…”. Since Modi did not wear the cloth, the Tricolor or not, below the waist, he did not violate the Act.

The said photographs had resulted in a series of cases against the Prime Minister for reportedly “disrespecting” the flag. In 2015, a case was filed in Delhi against Modi for allegedly "insulting" the national flag during Yoga Day celebrations. A similar case was also lodged in Patna, Bihar the same year. The Delhi case was dismissed in 2018 after the complainant in the matter passed away in 2017.

In 2015, the PM was also accused of “disrespecting” the flag which he had reportedly signed before it was presented to former U.S. President Barack Obama by celebrity chef Vikas Khanna. The government had denied the allegations insisting the cloth was a work of handicraft, and not the tricolor, prepared by the differently-abled daughter of the chef. The Prime Minister had autographed it on the behest of Khanna and his family’s request.

There are no media reports to suggest that PM Modi wore the National Flag on International Yoga Day in 2015, and used it to wipe sweat off his face. The Prime Minister appears to have used a stole with the same color as the Tricolor at the event. Hence, we mark the claim as misleading.