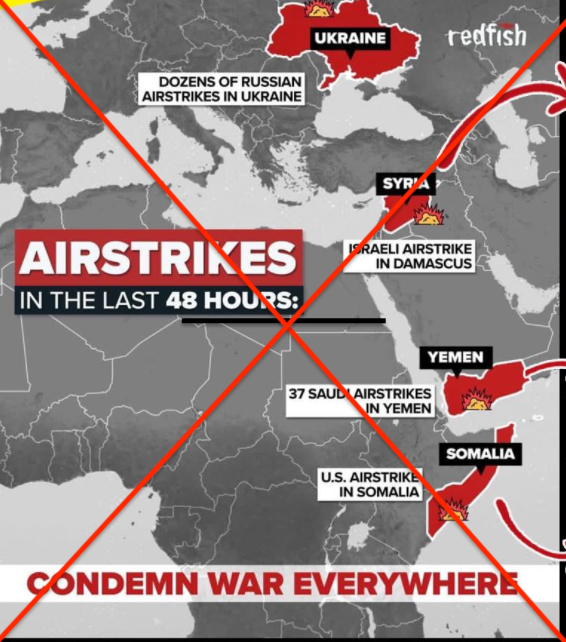 The map contains inaccuracies and was created by a Kremlin-backed news outlet.

A map doing the rounds on several social media platforms suggests that Western countries’ focus on Russia’s invasion of Ukraine is hypocritical, as other governments have recently launched airstrikes on foreign countries. It is true that other countries have carried out airstrikes resulting in civilian casualties. However, this map contains inaccuracies. Furthermore, an investigation revealed that the media startup that originally created the map is a Kremlin-backed organization.

The text on the map reads that there were “dozens” of Russian airstrikes in Ukraine during the first 48 hours of the invasion. This is an understatement. According to Reuters, Russia launched at least 320 missiles within two days of announcing a “military operation” in the country.

Additionally, the map has singled out Ukraine, but not Crimea, as a target of Russian invasion on the map. On this map, Crimea appears in grey, not as part of Ukraine. Many countries condemned Russia's annexation of Crimea in 2014, and still recognize it as part of Ukraine. In February 2022, Ukrainian President Volodymyr Zelenskiy said that “Crimea will return to Ukraine. Exclusively through diplomacy. We do not encroach on what’s not ours, but we will not give up our land.”

As Vice reports, the media outlet Redfish, which created the map, states that it is “neutral, but objective.” In fact, in 2018, the Daily Beast revealed that the outfit is staffed by former employees of the Russian state media outlets RT (formerly known as Russia Today) and Sputnik, both of which regularly post propaganda and disinformation.

Vice reporter David Gilbert writes that “whataboutism” is a tactic which involves leaders referencing other countries’ wrongdoing in order to deflect from their own. He adds that Putin has employed this technique on numerous occasions. In 2014, for instance, the “directed his state-run media to highlight police brutality toward Black Americans in order to deflect criticism of his human rights record from U.S. lawmakers.”

This particular map is not accurate and does not come from a neutral source. As such, it offers a misleading view of the conflict.