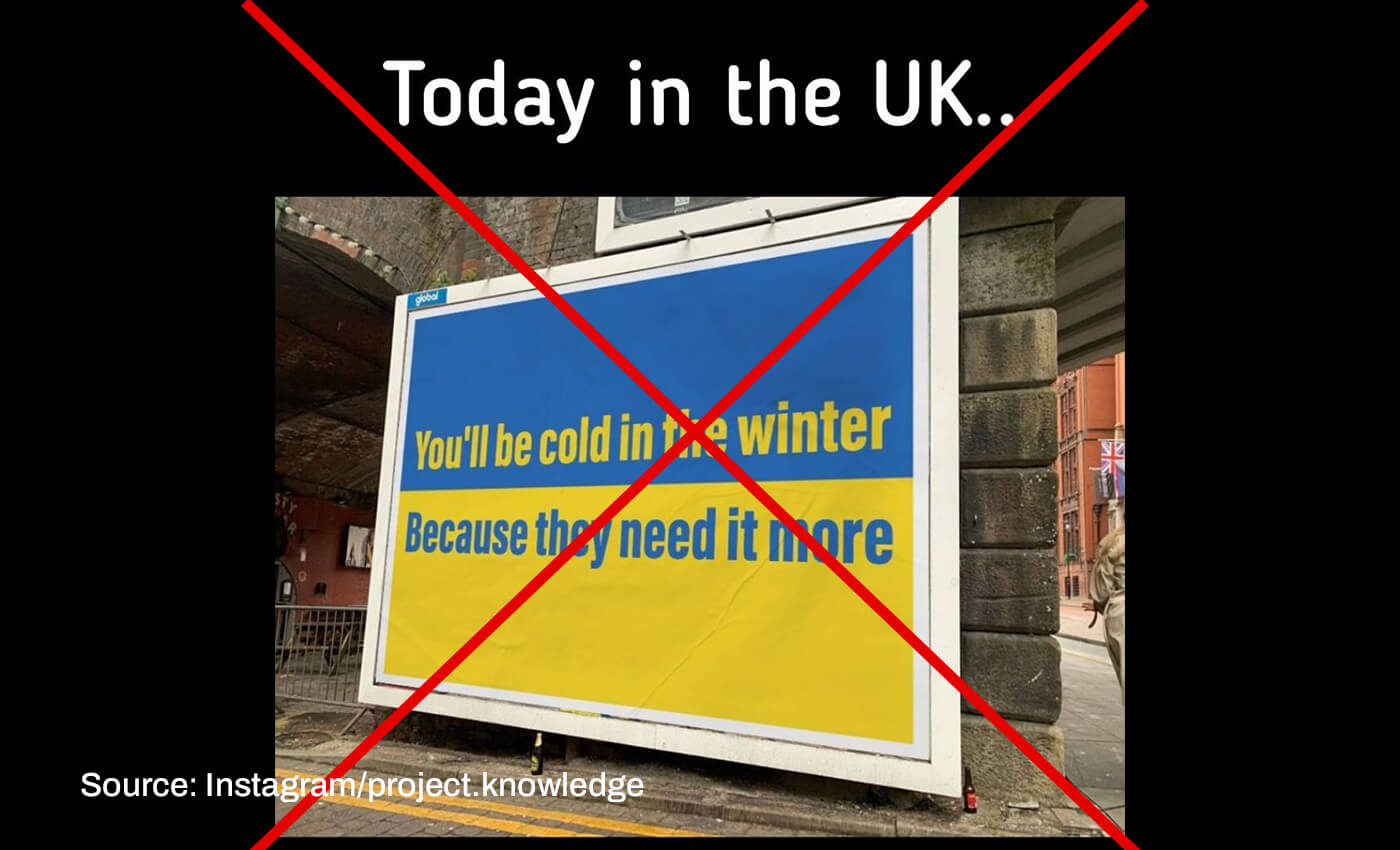 A digitally altered image of a billboard contains this message. There is no evidence that such a billboard was put up in the U.K.

Consumers in the United Kingdom are facing sharp increases in their energy bills, with further price rises to come. Capitalizing on this public anxiety, several posts on social media are spreading various misleading and false narratives. The Russian invasion of Ukraine in 2022 has been one of the many reasons behind the price rise, and one Instagram post shared an alleged image of a billboard in the U.K. with the caption, "Who voted to give Ukraine billions!? Not me! Not you! F**king no one! Gas and electric are soaring to a ridiculous cost, and many people will have to choose heat or eat…we have no say on this." The billboard image contains the text, "You'll be cold in the winter / Because they need it more," written on a blue and yellow background that resembles the Ukrainian flag. However, the billboard image has been manipulated.

On March 31, 2022, the Twitter account Manchester Collective (@manc_collective) posted the original image with serval other billboard images containing similar concert posters. The tweet reads, "Spotted! Have you seen our posters out and about in Manchester? Under bridges, around corners, and next to the likes of @bluedotfestival and @LudovicoEinaud." Manchester Collective is an arts organization that describes itself as "built for a fresh and diverse musical world."

Reverse image searching traced the image to a Manchester-based advertising agency, KMS. KMS Media's homepage says they are an advertising agency that "creates imaginative and integrated campaigns across the Arts, Culture, Education and Charities sectors." Under their Gallery/Our Work section, the actual billboard image in question is visible, with the caption "Legal fly posters off Oxford road in Machester City Centre."

Comparing the viral image, we can see the brick wall, the side fence, two glass bottles, and a U.K. flag on the right-hand side; all the objects and their positions match the original image except for the billboard content. Due to these similarities, we have concluded that the viral image is an edited version. We did not find any other billboards in Ukrainian flag colors claiming people in the U.K. will be cold in the winter.

The U.K. and other international partners have supported Ukraine during the Russian invasion. The U.K. government says it is "providing a range of economic, humanitarian and defensive military assistance to Ukraine, and is imposing additional sanctions on Russia and Belarus." The U.K. government page lists all the details of the support it is providing to Ukraine.

Logically published a report in August 2022 detailing why British energy bills are increasing faster than in some European countries. The report pointed out different factors that have contributed to this surge, such as the privatized energy suppliers in the U.K., the Ofgem price cap, rising natural gas prices, and high demand outside of Europe. Prices in Europe are expected to rise further in 2022, which is connected to the rising wholesale prices of oil and gas. The cost of electricity generation is highly contingent on the price of fuel. Also, as Logically reported, "as recently as 2021, the EU imported around 40 percent of its natural gas from Russia, which also supplied the bloc with 27 percent of its imported oil during the same period." Western sanctions and a reduction of Russian exports of gas have contributed to the issue.

An edited image of a billboard in Manchester displays an alleged graphic which draws a link between the rising living costs in the U.K. and the U.K.'s assistance to Ukraine in its war with Russia. There is no evidence of such a graphic being displayed on a U.K. billboard, and verifiable images of the same billboard show a different display; hence we have marked this claim as false.