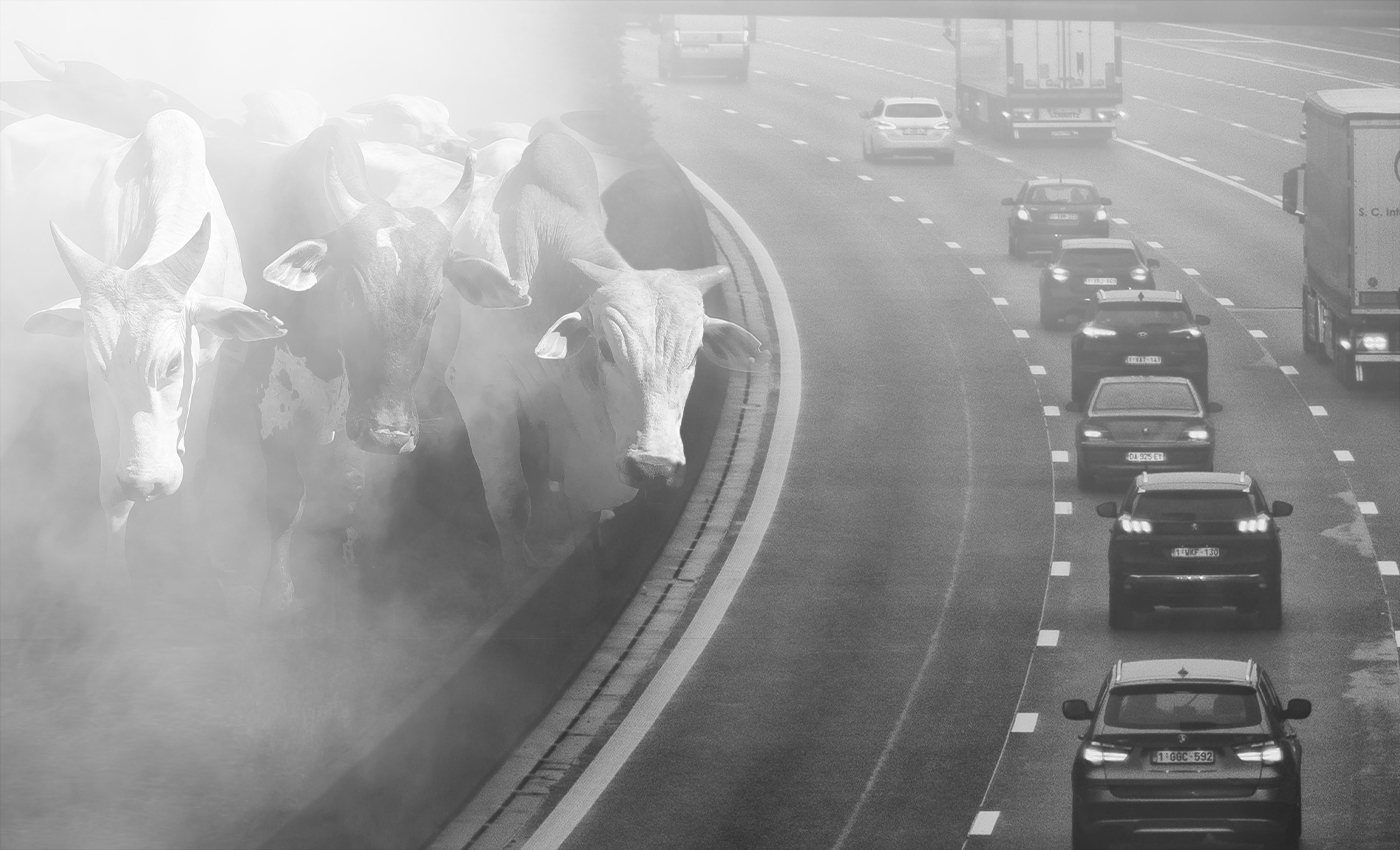 While livestock production makes up a smaller amount of global greenhouse gas emissions than transportation, it is still harmful to the environment.

A recent Facebook post states that says that, in 1950, there were 10.6 million cattle in the U.K. 50,225,000 people in the U.K., and 4 million licensed vehicles on the roads. It goes on to compare these figures to more recent years, saying that in the U.K. in 2018, there were 9.9 million cattle, 66.4 million people, 38 million licensed vehicles on the roads. It adds that in 2018 there were 38 million commercial flights. Those who shared these statistics have then gone on to question why some participating in the ongoing U.N. Climate Change Conference (COP26) focus on emissions from cattle and not emissions from vehicles. They allege that the media is just focusing on cattle. The end of the Facebook post implies that the media are focusing too much on cattle, and that this attention is unwarranted. Which media outlets or articles are not specified. Although the figures above are correct - the number of cattle in the U.K has stayed relatively constant for the past 70 years - It is misleading to say that agriculture does not contribute to global warming because the number of cattle has not increased in the U.K. The number of cattle worldwide has almost quadrupled in the same period. The global population of cattle has increased from 265.72 million in 1950 to 1.01 billion as of 2022 - an increase of 281 percent. Global agriculture is one of the main causes of climate change, along with burning fossil fuels, deforestation, and global cement production and installation. Cattle produce methane gas, which is 30 times as powerful of a greenhouse gas as carbon dioxide. Globally, the transportation sector makes up 16.2 percent of greenhouse gas emissions, and livestock make up 5.8 percent. Agriculture as a whole makes up 18.4 percent. So while it is true that the transport sector as a whole contributes more greenhouse gases than cattle production, it is not true that cattle production is not harmful to the environment. As The Independent reported in 2018, a University of Oxford study showed that “cutting meat and dairy products from your diet could reduce an individual's carbon footprint from food by up to 73 percent.” As the New York Times has reported, “We grow a lot of crops to feed animals, and we cut down a lot of forests to do that. But beef, far more than pork or chicken, contributes to environmental harm, in part because it requires much more land. The greenhouse gas production per serving of chicken or pork is about 20 percent that of a serving of beef.” Analysis from Greenpeace – which was written about in the Guardian in 2020 – showed that “cows, pigs and other farm livestock in Europe are producing more greenhouse gases every year than all of the bloc’s cars and vans put together when the impact of their feed is taken into account.” EcoWatch, an environmental news site, reported in 2016 that “meat production is unexpectedly worse for the environment” than driving cars. This issue has been contested. Others have suggested that it is unhelpful to make comparisons over the exact contribution of individual factors to greenhouse gas emissions. The University of California highlights that authors of an influential study from the United Nations Food and Agriculture Association (FAO) acknowledged that it was incorrect to state that livestock was more damaging to the environment than cars. Frank M. Mitloehner, professor of animal science and air quality extension specialist, University of California, Davis, writes in The Conversation, "The problem was that FAO analysts used a comprehensive life-cycle assessment to study the climate impact of livestock, but a different method when they analyzed transportation." There are numerous ways that the U.K. has tried to make agriculture and cattle farming more sustainable, including land use, feed, and transportation. According to the most recent government data, around 10 percent of the U.K.'s overall greenhouse gas emissions come from the agriculture sector. 49 percent of that comes from methane, which is attributed to both cattle and sheep. The data from the past thirty years show a slight downward trend in greenhouse gas emissions from the agriculture sector. Overall, 66 percent of farmers in the U.K. as of 2020 were taking actions to reduce their emissions. Farming practices worldwide may be more or less harmful to the environment depending on national standards that vary from country to country. CORRECTION: We have changed the conclusion to better reflect the social media post that this fact check was in response to. 1/20/2022 CORRECTION: We have updated the check with additional information, and changed the claim and conclusion.