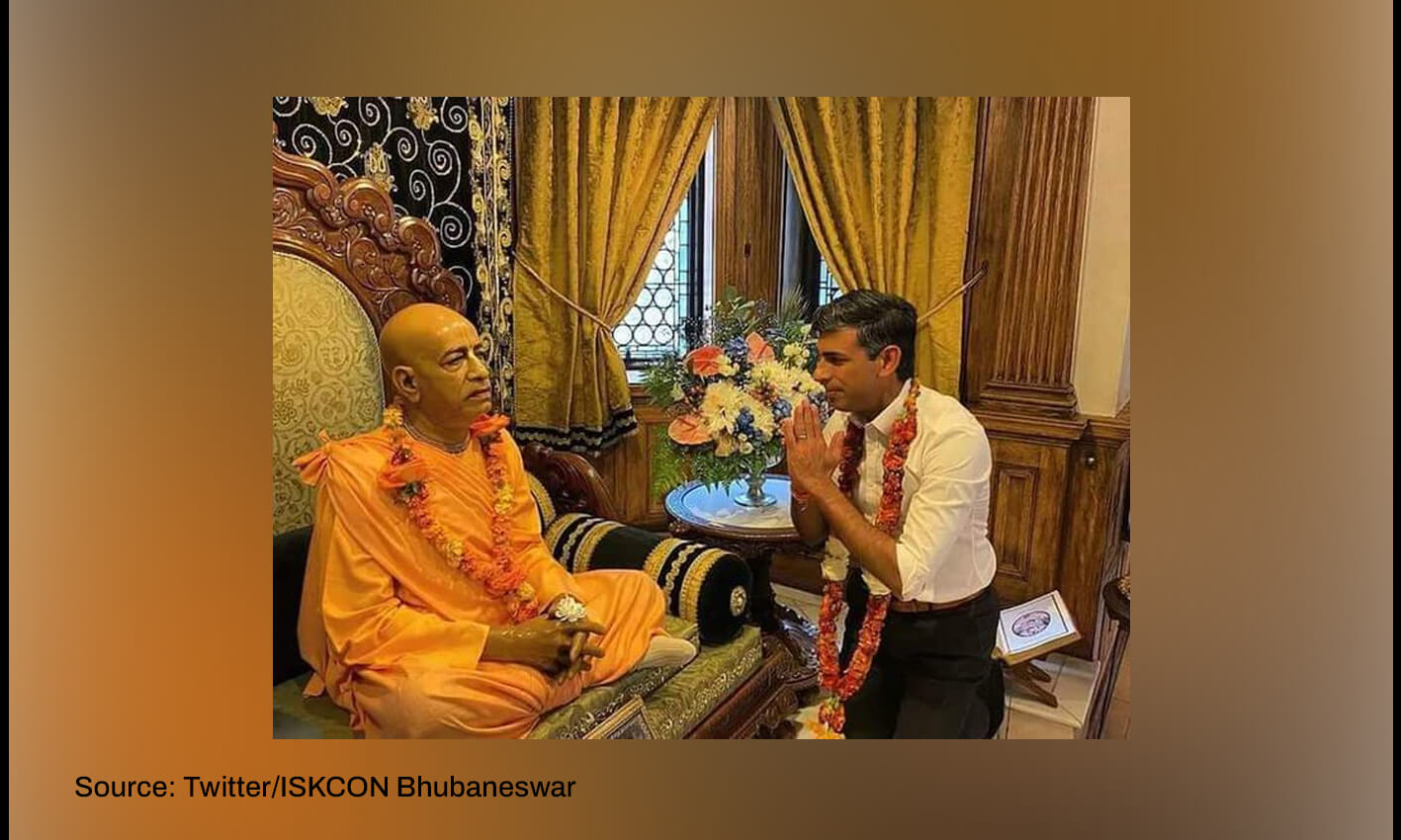 A photo of Rishi Sunak visiting the Hare Krishna Temple in August 2022, on the occasion of Janmashtami, is being shared in the context of his win.

A photo of newly elected U.K. Prime Minister Rishi Sunak paying his respects to an idol of Abhay Charanaravinda Bhaktivedanta Swami, also known as Srila Prabhupada, is being shared on Twitter in the aftermath of the Sunak's electoral win. Some claim that Sunak sought the blessing of Srila Prabhupada on the evening of the Indian festival of Diwali, which was on October 24, the day his win was announced. Srila Prabhupada was an Indian guru who founded the International Society for Krishna Consciousness (ISKCON), commonly known as the "Hare Krishna movement."

The photo, however, is from August 2022, taken during the Indian festival of Janmashtami and not on Diwali or after Sunak was appointed U.K. Prime Minister.

On conducting a reverse search of the photo, we found a report from the website of the Hare Krishna Temple in Watford, U.K. The piece, published on October 20, carried the viral photo and several other photos of Sunak and his wife, Akshata Murthy, celebrating Janmashtami at Bhaktivedanta Manor temple in Watford. This year, Janmashtami fell on August 18 in India, when Sunak and former U.K. Prime Minister Liz Truss were still caught in a leadership race for the previous election. The article further said that Sunak addressed the volunteers at the festival, saying, "It's been a tough campaign for me, but times of the most difficulty I have been given the teachings of the Gita, and it has been the Gita that has given me strength to keep fighting for things I believe in." The post said Sunak's visit ended with him feeding the cows at the manor.

We checked the Facebook page of the Bhaktivedanta Manor. We found that while the viral photo had been posted on October 24, congratulating Sunak on his win on the occasion of Diwali, the original post had been made on August 18. We also found a post with the viral photo and several other photos of Sunak and Murthy's visit to the Bhaktivedanta Manor. The post's caption stated that the couple had visited the temple on August 18 for the Janmashthami celebrations.

We also found a news report by a Watford local paper, the Watford Observer, from August 19, which carried the same photos and reported that Sunak and Murthy had celebrated Janmashtami at the temple.

Further, we checked Sunak's Instagram profile and saw several photos of the visit. While he had not posted the viral photo, the images in his Instagram gallery post showed him in the same clothing and garlands as in the viral photo.

It may be noted that several videos of him feeding the cows at the Hare Krishna Temple, which he did during the same visit, are being shared with false claims. Many have shared the videos claiming that he performed a "gau pooja" before taking the oath as prime minister, and some have shared it claiming it is from after his oath-taking ceremony.

A photo of U.K. Prime Minister Rishi Sunak paying obeisance to an idol of ISKCON founder Srila Prabhupada is being shared incorrectly as him visiting a Krishna temple in the U.K. after being elected prime minister. The photo is actually from a Janmashtami celebration in August 2022 at the Hare Krishna temple in Watford, U.K., which Sunak and Murthy attended. Sunak was photographed on that occasion praying to the idol of the Indian guru. Therefore, we have marked this claim false.