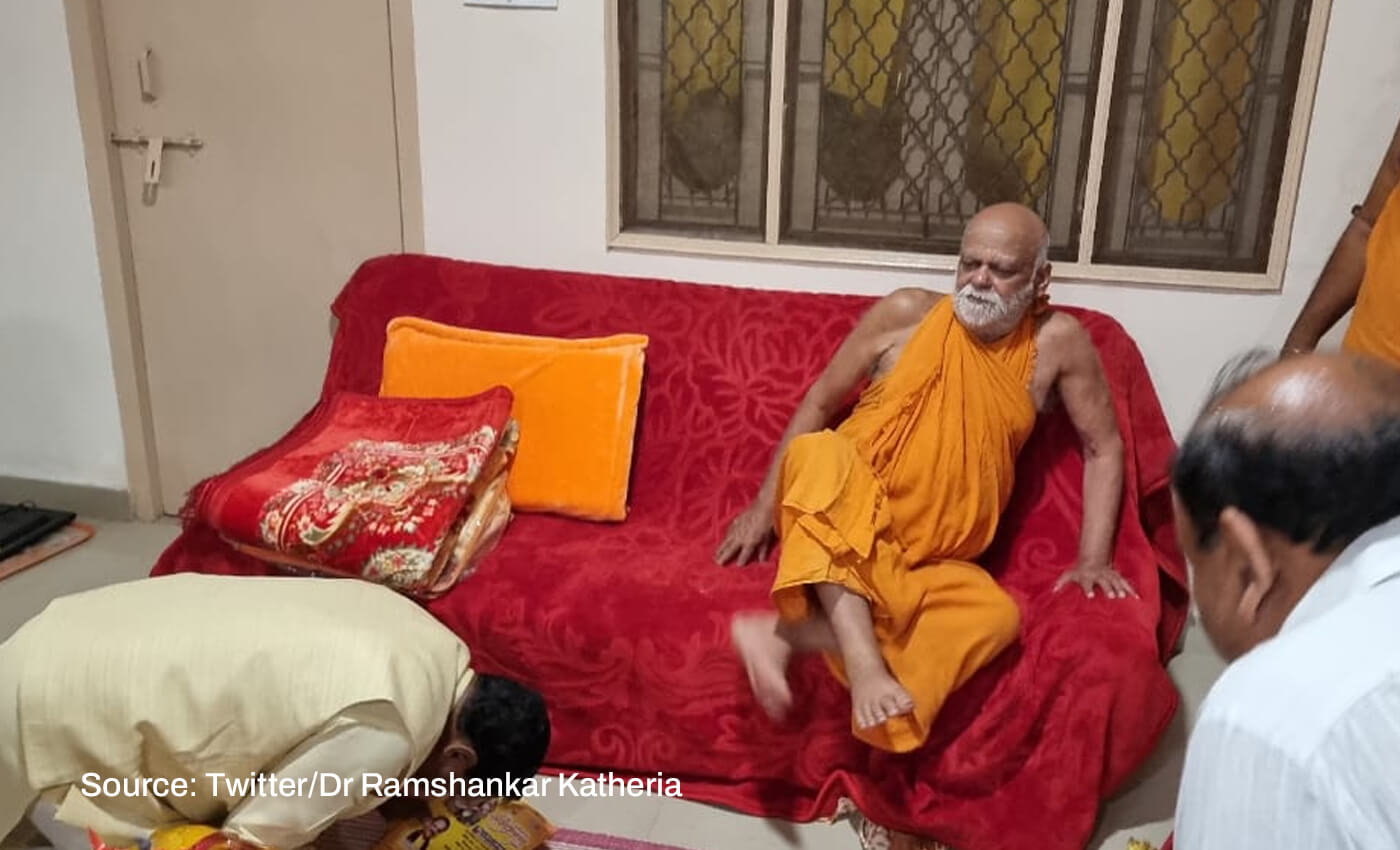 BJP MP Ramshankar Katheria has clarified that he touched Shankaracharya's feet and took his blessings during a visit to Govardhan Math in Puri.

Logically reached out to Etawah MP Ram Shankar Katheria. His personal secretary Radheysham told us, "The news is false. On March 16, MP ji met Shankaracharya in Brindaban. He invited him for a Bhagwat Path which was scheduled between May 15 to May 21. Sir (Ram Shankar Katheria) sat there with Shankaracharya ji for one hour, touched his feet and took blessings. He was there for an hour, so it is obvious for someone to change his sitting posture. One of our workers clicked few photos when guruji was changing his sitting position. MP ji shared those photos on his Twitter at that time. Someone took those photos and recently shared them with misleading claims. Legal action will be taken against the culprits as it is completely baseless."

On August 26, the MP shared the screenshot of the viral claim and wrote, "Shrimad Bhagwat Katha was organized in my place at Nagaria-Sarawa, Etawah from May 15 to May 22, 2022. Dr. Shyamsundar Parashar ji of Vrindavan was the narrator. On March 16, 2022, I went to invite Puri Shankaracharya ji to the event. During that time, I was in his company for one hour and received his blessings. Whatever is being shown in the media is completely false. No such incident has happened."

On March 17, MP Ram Shankar Katheria shared photos of his meeting with Shankaracharya on Twitter. He shared four photos in the tweet and wrote, "Govardhanmath {Mathura}:- Got the opportunity of meeting with the revered Jagadguru Shankaracharya Swami Shri Nischalanand Saraswati Ji Maharaj of Puripeeth. #MpEtawah."

﻿In adherence to conservative beliefs, some members of the upper caste Hindu community, including some priests and monks, do not allow Dalits, officially known as Scheduled Castes, to touch them, as they believe the Dalits are "untouchables." While casteism in various forms is still very much prevalent in India, this is not the case in this incident.

According to the Lok Sabha website, Dr. Ram Shankar Katheria was first elected to Lok Sabha in 2009 as a BJP candidate. In 2017 he was the Chairperson of the National Commission of Scheduled Castes. Currently, he is a member of the Consultative Committee, Ministry of Home Affairs, and Standing Committee on Defence.

Images of MP Ram Shankar Katheria's meeting with Jagadguru Shankaracharya were wrongly shared with a sectarian angle and claims of casteism were refuted by both present parties. Therefore, we have marked this claim as false.