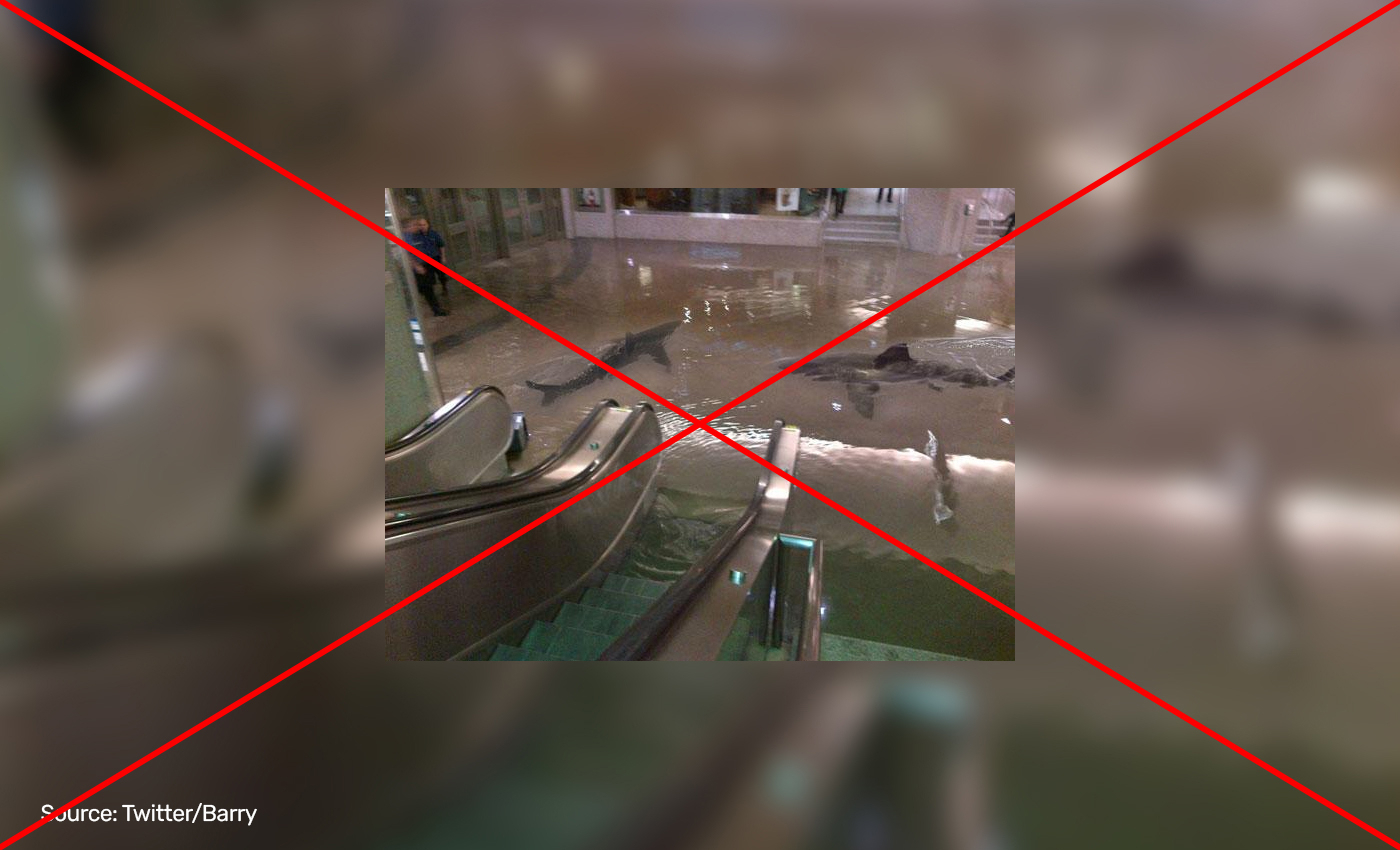 Although sharks were spotted on Florida streets after Hurricane Ian, a photoshopped image from Hurricane Matthew is being shared.

On September 29, 2022, Hurricane Ian left thousands of Floridians trapped amid flooded homes and shattered buildings that crossed into the Atlantic Ocean and passed toward South Carolina. The Associated Press reported that Ian struck Florida with 150 mph (241 kph) winds that tied it for the fifth-strongest hurricane ever to hit the United States. Many photos and videos of sharks and other marine life swimming in suburban floodwaters were shared online following the massive storm. One such post was from a Twitter user who posted a picture of sharks swimming near what appeared to be mall escalators. Part of the caption reads, "It just keeps getting WORSE!! Now sharks are attacking public spaces like malls. " However, this is not true. This particular image is an old hoax from 2016 that appeared online during Hurricane Matthew.

We found the exact image published in a 2016 WLKY article using a reverse image search. WLKY is a local television station in Louisville, Kentucky, affiliated with CBS. The article included a few fake Hurricane Mathew photos. One of them was of this viral shark image stating that it was supposed to be a mall in Jacksonville, Florida. But the actual photo was of Toronto's Union Station after a sewer tank broke in 2012, and it was photoshopped to include sharks in it.

The photoshopped version used the image of an actual location. According to a CBC News report on June 1, 2012, a subway line from Osgoode Station southbound to Union and Union Station north to Bloor-Yonge Station was closed due to "a backed-up storm sewer or a burst sewer pipe near a construction site." At the time, Toronto Transit Commission CEO Andy Byford said crews had to pump out the logged water inside the station, and electrical checking had to be done for elevators, escalators, and train tracks, and then the station would be reopened. The image of a shark was photoshopped.

Florida Politics published an article on September 29, 2022, about the viral images and photos of the shark(s) amid the hurricane. One video showing "a large, dark fish with sharp dorsal fins thrashing around an inundated Fort Myers backyard" gathered more than 12 million views on Twitter. It was filmed by Dominic Cameratta, a local real estate developer, from his back patio on September 28. Experts could not confirm whether it was large fish or a shark. Nevertheless, netizens dubbed it the "street shark."

This image of sharks near a mall escalator is photoshopped. It previously circulated online during a 2016 hurricane and has resurfaced. Although there are reports of sharks swimming in local floodwaters following Hurricane Ian, this image does not represent it accurately. Hence, we have marked this claim as false.