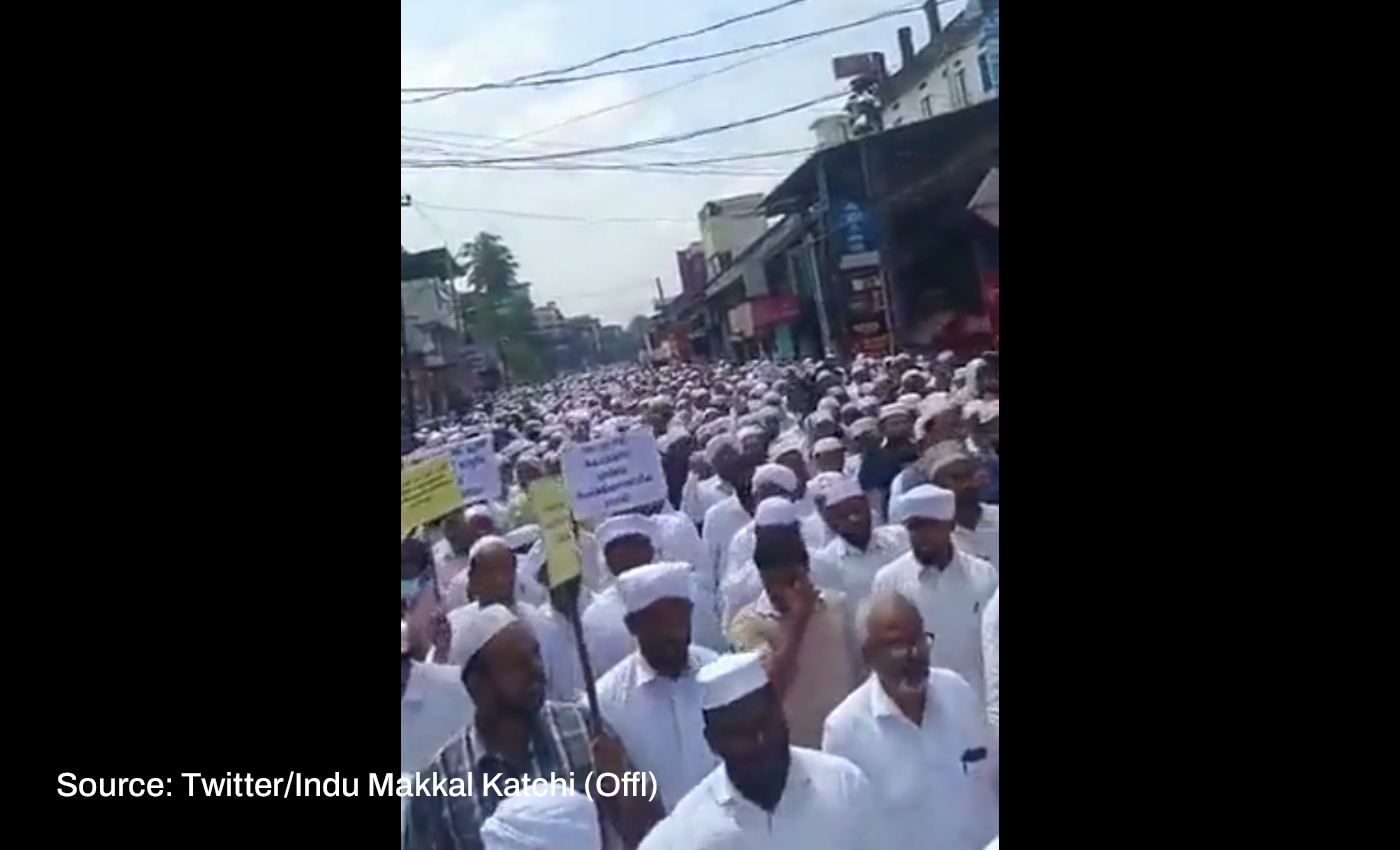 Muslims and other groups protested against the Collector's appointment as he was accused of killing a journalist and not because he was a Brahmin.

After the Kerala government decided to appoint Sriram Venkitaraman, Joint Secretary, Health and Family Welfare, as District Collector( DC) of Alappuzha on July 24, 2022, many protests took place in the state against his appointment. Several false and misleading videos related to these protests went viral on social media trying to wedge sectarian divide among the residents. One such video was from a Twitter account of Indu Makkal Katchi, with the caption titled, "In Allepy Kerala ystrday, Muslims opposing the new Brahmin IAS collector, took out a procession, MSM cunningly avoided this and highlighted ABVP in Karnataka. Listen to the slogans". Many right wing groups (Hindu and Christian groups) also spread similar communal messages on social media platforms.

Using reverse search on one of the video keyframes, we found that the viral video was posted by global defense analyst Rakesh Krishnan Simha on his Twitter account on August 1, 2022. The caption read, "Kerala Muslims protested against the new collector Sriram Venkitarama, who had driven his car and killed a Kerala Muslim journalist in 2019." We also observed that at 0.22 sec of the viral video, the name board of a shop called Beauty Stop could be seen. The location of the shop was mentioned as Up-Hill, Malappuram. Hence, it confirms the video is from Malappuram.

On further investigation, we found videos of protests in Calicut (Kozhikode), Malappuram, Kasargode, and Palakkad opposing the appointment of Sriram Venkataraman as the DC of Alappuzha on the YouTube channel of news outlet Asianet. The NewsMinute had mentioned how protests had taken in all districts outside district headquarters to counter Venkitarama’s appointment. The IAS officer is an accused on trial in the death of journalist KM Basheer. According to news reports, Basheer had parked his motorbike on the road when the officer’s car allegedly rammed into him, killing him. Venkitaraman was also acccused of being drunk at the time of the incident, and delaying giving his blood for test. Basheer used to work for newspaper Siraj that was owned by a Sunni group.

Several news reports have established that the protest were held against Venkitaraman’s appointment as he was accused of killing a journalist and not because he was a Brahmin or a Hindu. According to a tweet by one mediaperson Muhammed Sabith's, even the Kerala Union of Working Journalists (KUWJ) had protested against the state government for appointing Sriram Venkitaraman as the new Alappuzha DC. The state government’s decision was also contested by opposition political parties such as the Indian National Congress.

The protests by Muslim organizations and others against the new Alappuzha DC was on account of him being the main accused in the death of a Muslim journalist. There was no evidence of a communal angle in this matter. Hence, we mark the claim as misleading.