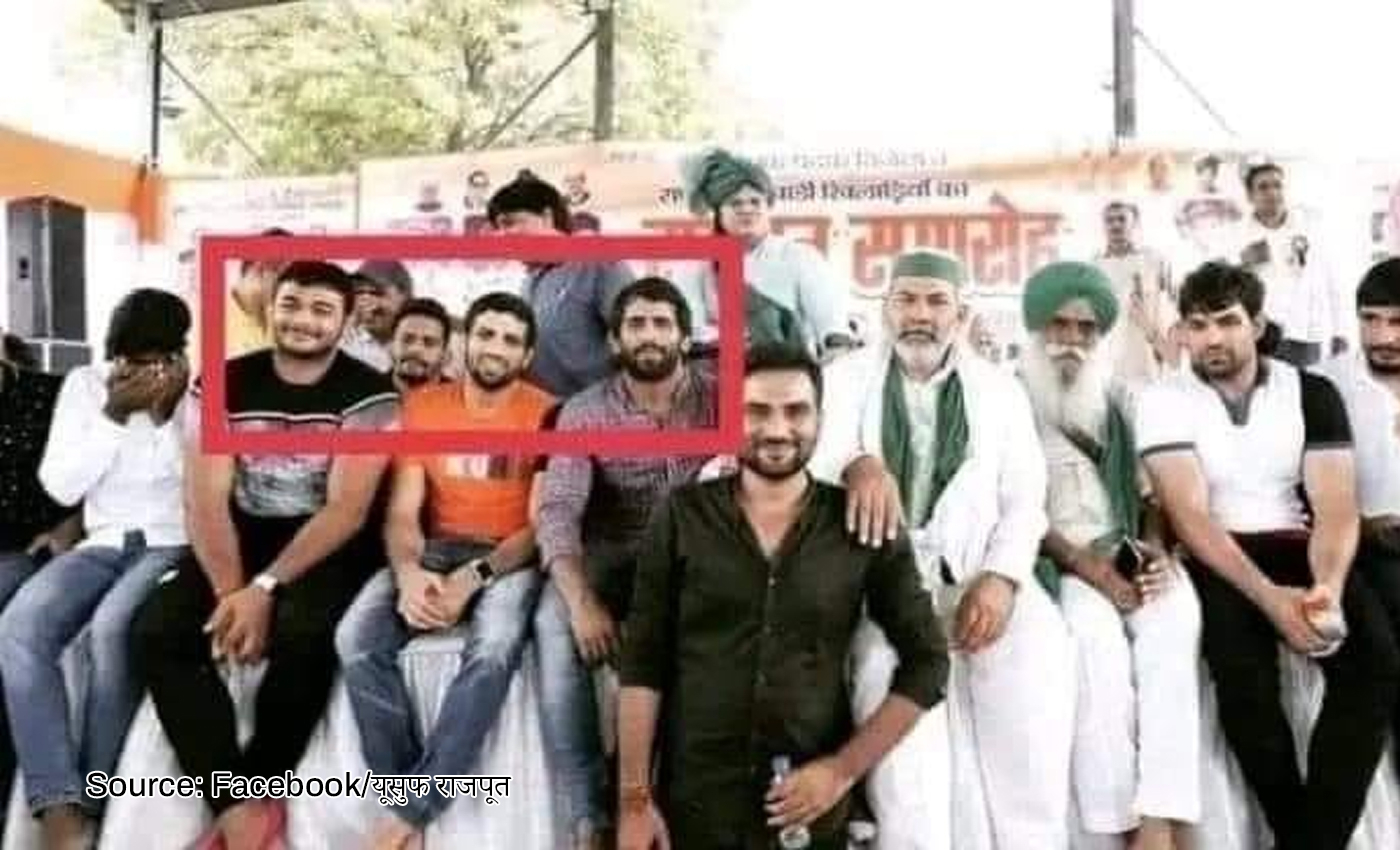 The photo is from a ceremony held by farmer groups in September 2021 to felicitate Tokyo Olympics medal winners. It is not from the farmers' protest.

A photograph of Indian wrestlers Ravi Kumar Dahiya, Deepak Punia, and Bajrang Punia sharing a stage with farmer leader Rakesh Tikait has been going viral on social media with the claim that the athletes were a part of the farmers' protest. The photo is being shared on Facebook and Twitter after the conclusion of the Commonwealth Games, where all three players won gold medals. Among those who shared the claim are Congress leader Alka Lamba and journalist Mandeep Punia.

We noticed that a banner on the stage behind the wrestlers in the image bore the Hindi word 'samaroh', which means ceremony. Keeping this in mind, we carried out a keyword search which took us to several news articles.

A Hindi news report by ETV Bharat from September 10, 2021, noted that farmer groups under the banner of Sarvajati Kisan Garib Manch had held a ceremony in Haryana's Sonipat to felicitate several Tokyo Olympics medal winners. Rakesh Tikait and several other farmer leaders were at the event to honour these sportspersons. The report noted that Ravi Dahiya, Bajrang Punia, Deepak Punia, hockey player Sumit Kumar, and Para Olympian Amit Saroha were among the players who were honoured at the felicitation ceremony. The report also stated that while the players accepted the tokens of respect they were presented with, none of them addressed the event. The news report carried a photo of the event, clearly showing the same players being felicitated, making it clear that the viral photo in question is of this event. Rakesh Tikait was one of the prominent faces of the farmers’ agitation against the three laws passed by the Indian government paving way for privatization in the agriculture sector.

Further, India Ahead News published a video clip of the event, which showed the players being felicitated and Tikait addressing the attendees.

‘A video news report on the same event was uploaded on YouTube by news publication Punjab Kesari on September 10, 2021. It shows that the players are honoured and sitting on stage posing for a photograph, as is seen in the viral photo. Further, Tikait's address also makes it clear that it is a felicitation ceremony, not a protest.

While the sportspersons did not actively participate in the protest led by farmers, some of them had extended their support to the movement. Among such athletes was wrestler Bajrang Punia who had shared a picture on Twitter with the caption“I Am With Farmers”. He had blamed the Indian government’s ‘adamant attitude’ for forcing farmers to sit on the roads for their demands.

The farmers' protests went on for more than a year after being kicked off in 2020. The contentious laws were eventually rolled back in December 2021 in light of the protests that had spread across the country. The farmers are, however, back on the streets again as they allege the government is yet to fulfil its promise on legalizing Minimum Support Price (MSP) among other things.

An old photo of Indian sportspersons being felicitated by farmer groups is being falsely circulated with the claim that these players were active participants of the farmers' movement in India. Hence we mark this claim false.