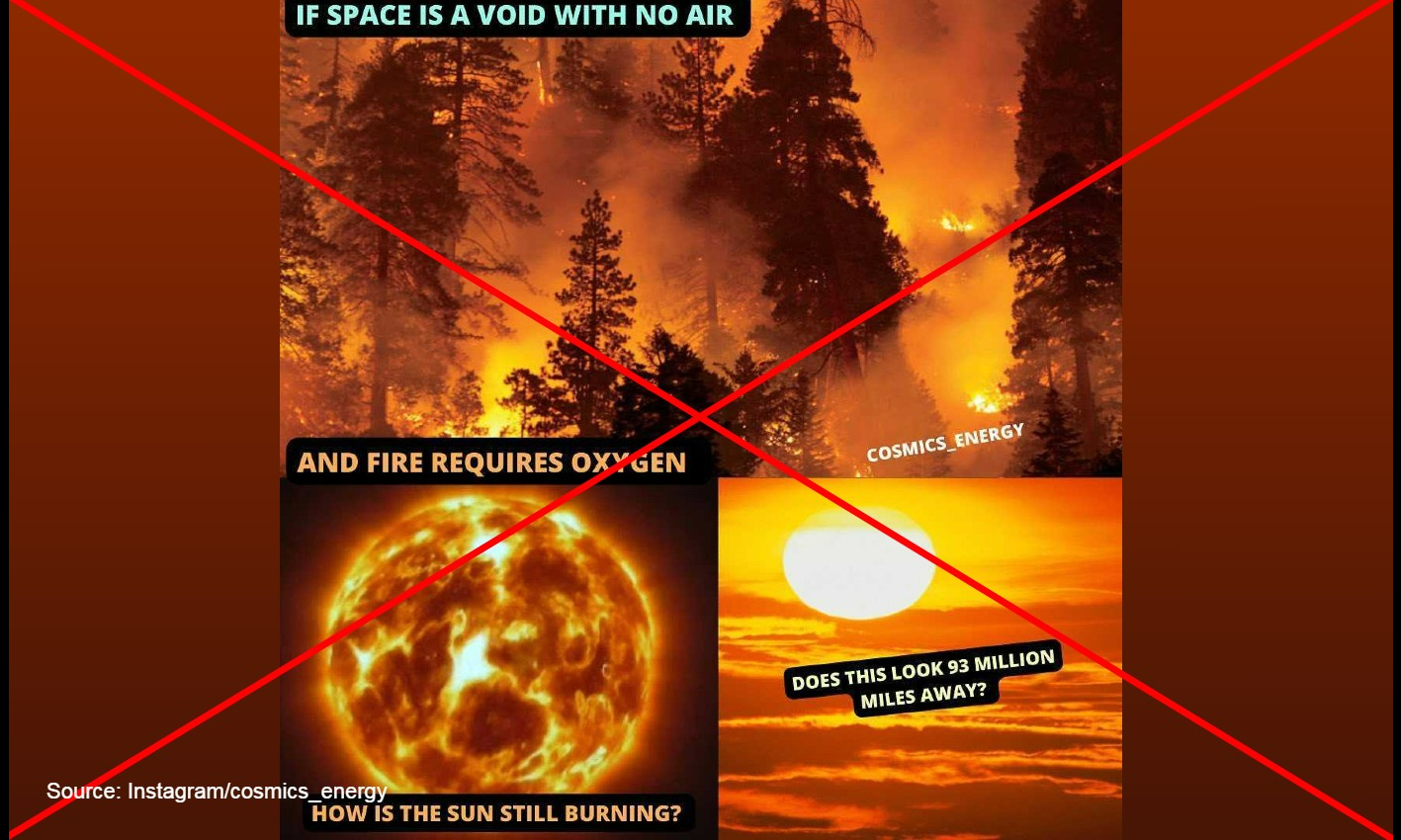 Optical illusions make clouds look like they are behind the Sun in some images and videos. It is not proof that the Sun is close to Earth.

A collage of images was shared on Instagram, questioning the distance between Earth and the Sun. The text overlaid on a photo of burning trees and a pictorial representation of the Sun reads, "If space is a void with no air and fire requires oxygen, how is the sun still burning?" The third image is of an orange sky in which the rising or setting Sun looks like a glowing white circle. In this image, some clouds at the bottom appear to be behind the Sun. The text on this image reads, "Does this look 93 million miles away?" The Instagram post caption has hashtags related to Flat Earth. The associated channel has many other posts supporting the Flat Earth conspiracy theory, as it claims to be on a "mission to present truthful information which serves and empowers humanity."

We could not establish the exact origins of the images in this collage. However, Inverse, the science and technology information website, covered this assertion and its other iterations in a debunk published in May 2017. The article reviews a video with the same claims and states that it is an optical illusion. A camera's sensor is not subtle enough to capture a faint cloud in front of the Sun. Flat Earthers have touted such images and videos in recent years as proof that some clouds move behind the Sun.

British science writer Mick West debunked a similar claim in 2015 on his forum Metabunk. He stated that, due to the amount of light emitted by the Sun, it appears in photos "at the maximum brightness the camera can handle, so just appears as flat white." If there is something in front of it that is transparent enough to let through a lot of the sunlight, "then that bit will be less bright but still higher than the maximum brightness the camera can handle. So the camera will still see it as the same as the rest of the Sun, bright white. This creates the illusion that partially transparent objects go behind the Sun." In the debunk, West also explains this illusion with illustrations using household objects.

In March 2015, Dr. Christopher S. Baird, a West Texas A&M University physics professor, answered a question about the Sun "burning" on the university website's 'Science Questions with Surprising Answers' section. He stated that the Sun does not run out of oxygen to burn because its burning is not chemical combustion but rather nuclear fusion. "Nuclear fusion does not require oxygen. In fact, you don't need any other material at all. You just need enough pressure or heat to squeeze the nuclei of the atoms close enough that they overcome their electrostatic repulsion and bond into a single nucleus." The Sun has a core temperature of 16 million Kelvin and a core pressure of 25 thousand trillion Newtons per square meter. Due to the heat created by nuclear fusion, it glows and emits light.

According to NASA, "About 93 million miles (150 million kilometers) represents the average distance from the Sun to the Earth." This has been established over decades of research and scientific and technological advancement. In a July 2020 article, Physics World explained why these conspiracy theories are persistent today. Asheley Landrum, a psychologist from Texas Tech University, explained that it is not "an education thing" but is about "distrusting authorities and institutions" and seems to be based on both a "conspiracy mentality and a deeply held belief that looks a lot like religiosity but isn't necessarily specifically tied to a religion." Logically has previously debunked many similar claims about flat Earth theories.

The Sun is about 93 million miles away from the Earth. It does not need oxygen to burn in space as its immense heat and light result from nuclear fusion, not chemical combustion. Images and videos of optical illusions caused by its extreme brightness have been misinterpreted as proof of the Sun being closer to Earth as part of the flat Earth conspiracy theory. This has been disproven thanks to centuries of scientific research. Therefore we mark this claim false.