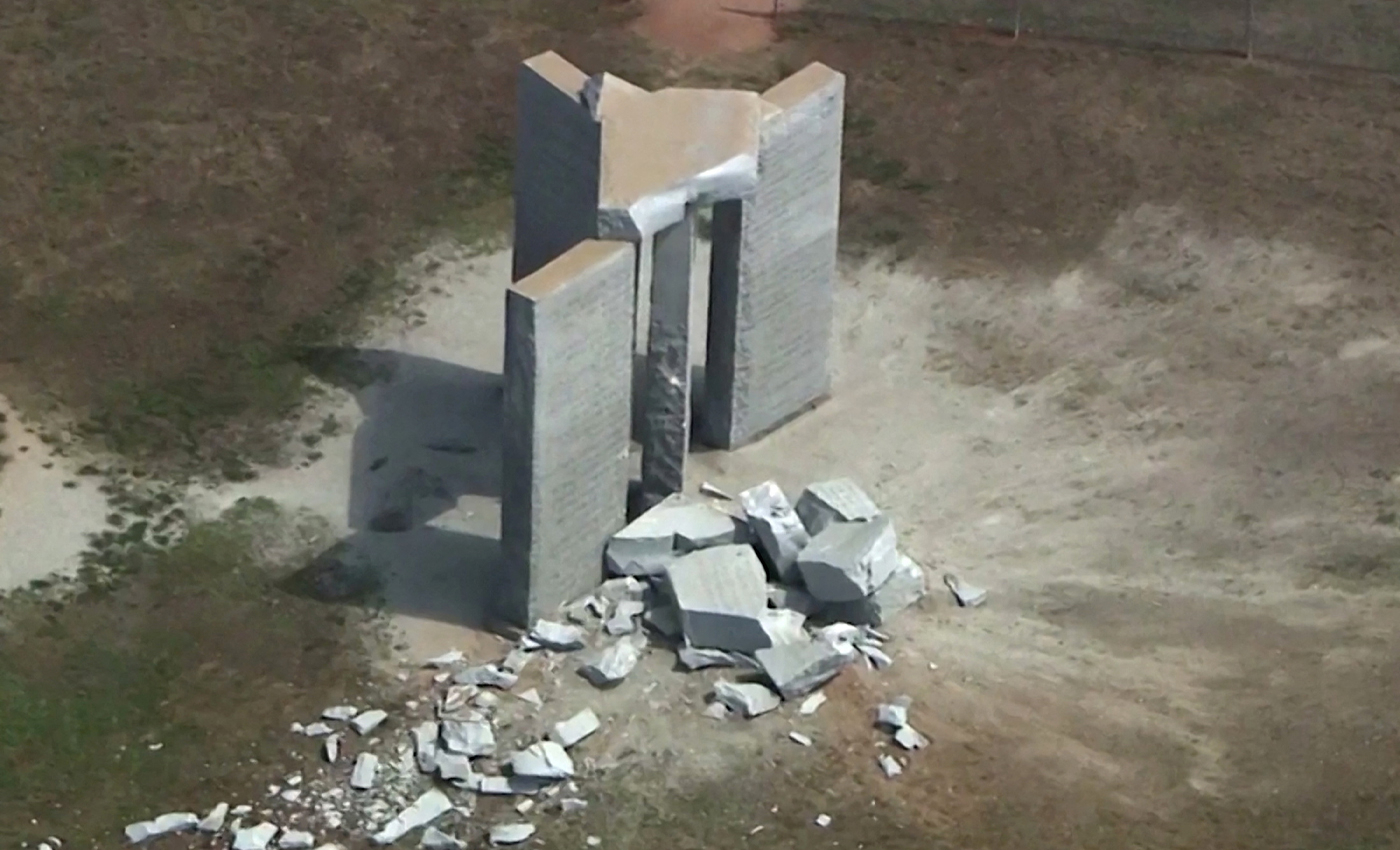 The Georgia Guidestones was damaged in a bombing and later destroyed by authorities out of safety concerns. It was not due to an earthquake.

On July 6, 2022, social media posts shared a photograph of the damaged Georgia Guidestones monument in Elbert Country, Georgia. Some claimed that an earthquake destroyed the granite monument. One post reads, "BREAKING: "At 4 am this morning, one of the Georgia Guidestones collapsed and crumbled. Reports are saying it was an earthquake, but be not deceived - this is a sign from God intervening on our behalf. Down with the Globalist and the New World Order."

The monument did not collapse due to an earthquake. Contrary to the alleged claims, on July 7, the Georgia Bureau of Investigation (GBI) shared a surveillance video of the site on its Twitter account, showing an explosion that destroyed the Georgia Guidestones, and later posted separate footage of a silver color car leaving the area after the blast.

WSB-TV, a television station in Atlanta, published an article reporting that the bureau also released footage showing an unidentified person running to and from the monument around the time of the explosion. The video and still images captured are of poor quality, but they do show a figure seemingly carrying something large to the monument's base. The local District Attorney's office said whoever destroyed the monument faces at least 20 years in prison without parole for destroying a public monument with an explosive device.

The GBI released a statement on its Facebook page that the entire structure was subsequently demolished from the site amid safety concerns. Also, the agency said that the Elbert County Sheriff's Office asked the GBI to assist with the investigation and that they are actively conducting their examination of the site. Anyone with information is encouraged to contact the Elbert County Sheriff's Office or the GBI Athens Office.

According to the U.S. Geological Survey (USGS) website, no seismic activity has been recorded in Georgia in July 2022 so far.

According to BBC News, the Georgia Guidestones, often referred to as the "American Stonehenge," were built in 1980 and inscribed in eight languages on the stones, which are meant to act as "guides" for people to conserve humanity after a nuclear war. Since its erection, the monument had been surrounded by unfounded theories and conspiracies, such as the New World Order, a purported plot by global elites to rule humankind.

The GBI said authorities destroyed the monument for public safety after an explosive device planted at the monument damaged the site. An earthquake did not destroy a pillar of the Georgia Guidestones. Hence we have marked this claim as false.