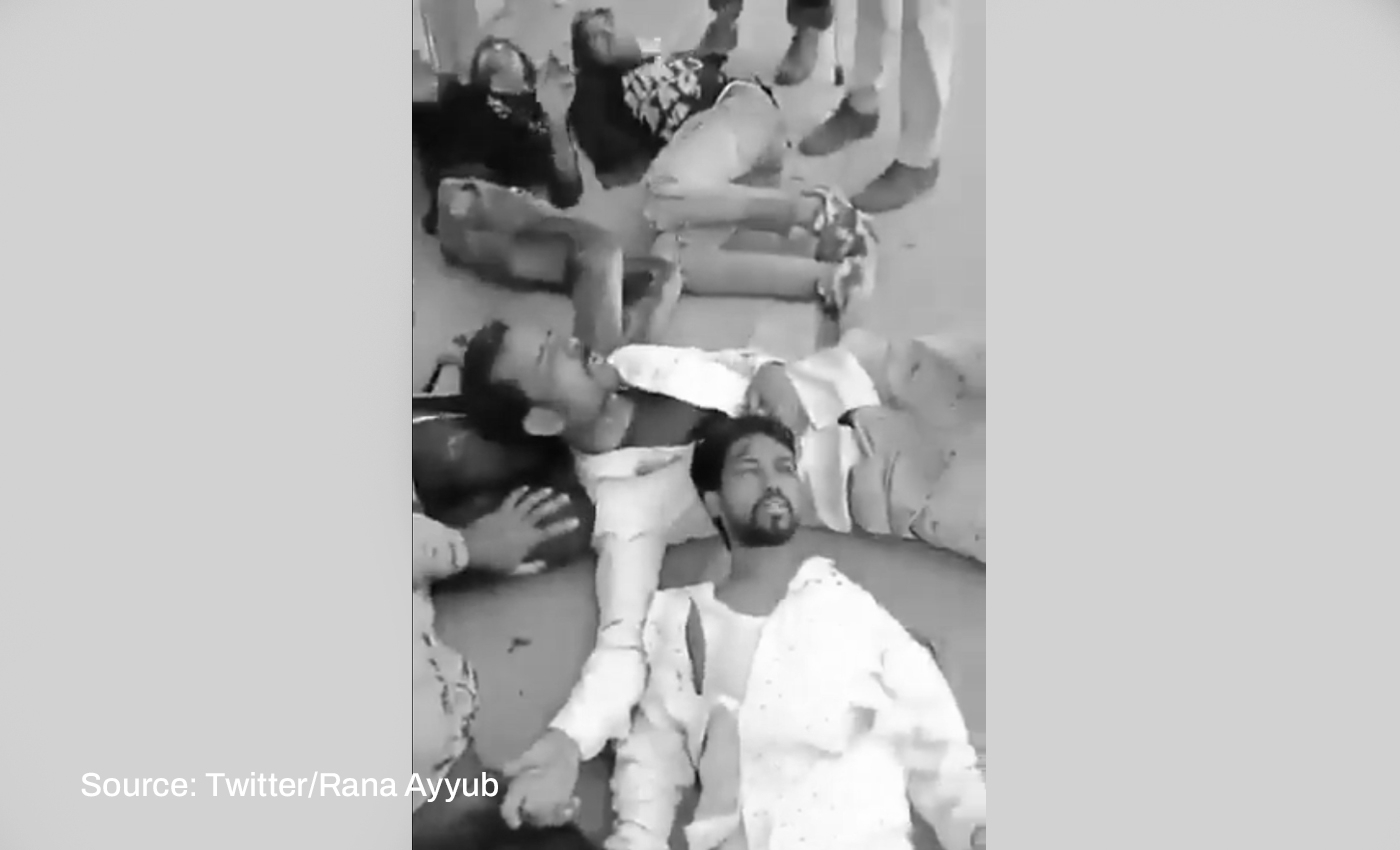 An old video from 2020 of Delhi Police beating up Muslim men during the Delhi riots has been falsely shared as Jammu & Kashmir Police hitting men.

A post doing rounds on the Indian microblogging site Koo shows five seriously injured men lying on the roadside singing the Indian national anthem Jana Gana Mana. The clothes of all the men who were also bleeding profusely. Some police officials with batons can be seen threatening the men to sing the national anthem. The post's caption claims that the injured men are from Rajasthan and were in Jammu and Kashmir where they raised pro-Pakistan slogans and slogans against converting India into a Hindu country but were shown their place by the local police. Similar posts using the same video have also made their way into other social media platforms such as Facebook.

The shared video is from 2020 and was captured during the Delhi riots. Several Twitter accounts had shared the video even though the original source could not be identified. On February 25, 2020, @shaheenbaghoff1, which claims to be the official social media account of the anti-CAA movement protest site, posted the video on which The Times of India (TOI) and other media outlets later reported. Fact-checking website Alt News verified the video on February 25, 2020 after speaking to one of the injured protestors. The victim had blamed the Delhi Police for allegedly assaulting 5-6 men. The incident had taken place near the Krishna Marg bus stop in Kardam Puri locality of Shahdara in northeast Delhi around 5:45 PM.

According to an India Today report, on December 24, 2020, Delhi High Court issued a notice to Delhi police over the death of 23-year-old Faizan, who died in a hospital a day after being released from police custody. He was among the five Muslim men forced to sing the national anthem during the northeast Delhi riots in February 2020. Faizan's mother had filed a petition in the Delhi HC for further investigation by a Special Investigation Team (SIT).

The Indian Express published a screengrab of the video in one of their reports. The caption read, "Faizan is seen lying injured on the road in a video." In June 2022, Delhi police announced a reward of Rs 1 lakh for anyone who provided information leading to the arrest of the police officer seen in the video, the Indian Express reported.

Riots had erupted in North-East Delhi's Jaffrabad after Bharatiya Janta Party leader Kapil Sharma gave an ultimatum to the Delhi Police to get a sit-in organized by a group of women cleared within three days, India Today reported. The women and other residents were protesting against the Citizenship (Amendment) Act, 2019 which allows the grant of citizenship to non-Muslim refugees from Pakistan, Afghanistan,Bangladesh, and a few other countries in India. Anti-CAA protests erupted throughout the country in late 2019.

The video was shot during riots in Delhi in 2020. The men in the video had not raised any pro-Pakistan slogans and were beaten up by Delhi Police who threatened them to sing the national anthem. Therefore, we have marked the claim misleading.

The Times Of India