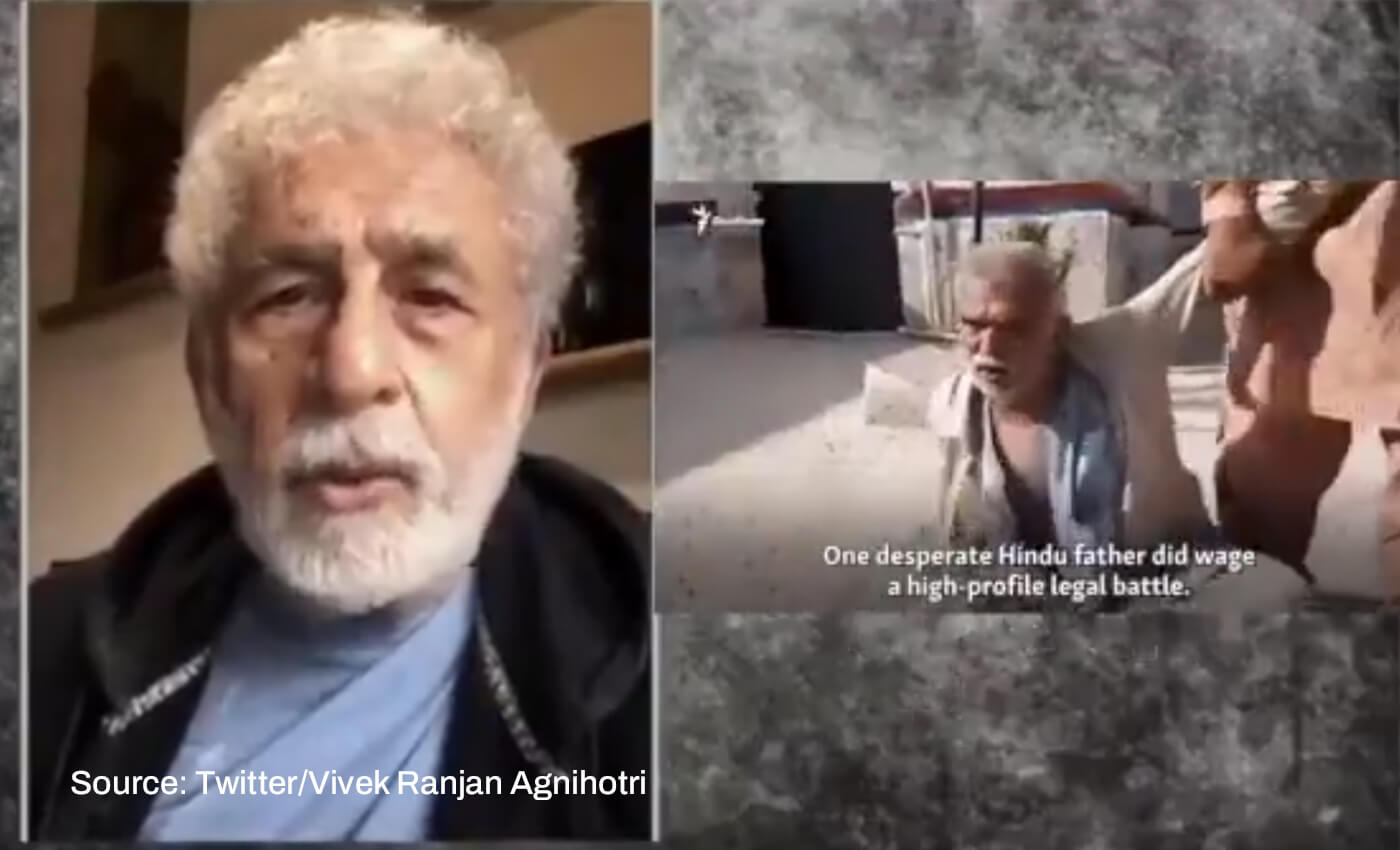 The visuals of violence by Muslims and the suffering of Hindus have been overlaid in the clip. They were not part of the original recitation by Shah.

A video of actor Naseeruddin Shah reciting a Hindi poem by poet Manglesh Dabral has been shared by filmmaker Vivek Ranjan Agnihotri on Twitter, racking up over 1k retweets and 3k likes. The poem comments on how letters of the Hindi alphabet, which would remind people of specific words, have now begun to be used for different words that denote adverse circumstances. The recitation is captured on video, overlaid with visuals of incidents where Muslims have perpetrated violence or Hindus have suffered. The images in the reel show the two Muslim men behind the beheading of the Udaipur tailor, the murder of Manish in Delhi by three Muslim men, alleged brutality against Hindus in Pakistan, and Mumtaz Qadri, who assassinated Punjab Governor Salman Taseer in 2011 in Pakistan. Several news clippings about Hindus being attacked in Bangladesh, Pakistan, the U.S., the U.K., and Canada can also be seen in the video. The effect is that Shah is reciting a poem about violence perpetrated by Muslims around the world.

However, we found that the original video did not carry such visuals and only showed Shah reciting the poem along with some of the words, which can also be seen in the viral video.

We ran a Google search with keywords relating to Naseeruddin Shah and the poet mentioned, Manglesh Dabral. We immediately found the original video uploaded by BBC News Hindi on YouTube on September 14, 2021. We ran through the video and noticed that none of the photos and the clippings seen in the viral video were present in this version of the video. We also found that in the BBC News video, Shah introduces himself before the recitation, at which time a name band also appears at the bottom of the screen. He then extends greetings on Hindi Diwas to the audience and introduces the poem he will recite. This section has been edited from the video shared by Agnihotri and the BBC's branding.

We also found a news report published by BBC News Hindi on the same day, which carried the video and a transcription of the poem, and explained that Shah had recited this on the occasion of Hindi Diwas. A tweet by BBC News Hindi from September 14, 2021, also carried the video and the note that Shah had recited the poem for the news organization's audience and readers.

Shah has publicly spoken about what it feels like to be a Muslim in an increasingly polarised country like India. In a controversial interview with The Wire in December 2021, he defended the Mughals and said that Muslims in India would fight back if required. However, this poem's recital had no communal angle and was meant to comment on the changing nature of the world.

The poem and the video have no relation to violence by the Muslim community against the Hindu community and were produced by BBC News Hindi as an offering on Hindi Diwas, 2021. The sensitive and specifically selected visuals have been overlaid carefully to give the recital a communal spin. We have therefore marked this claim false.