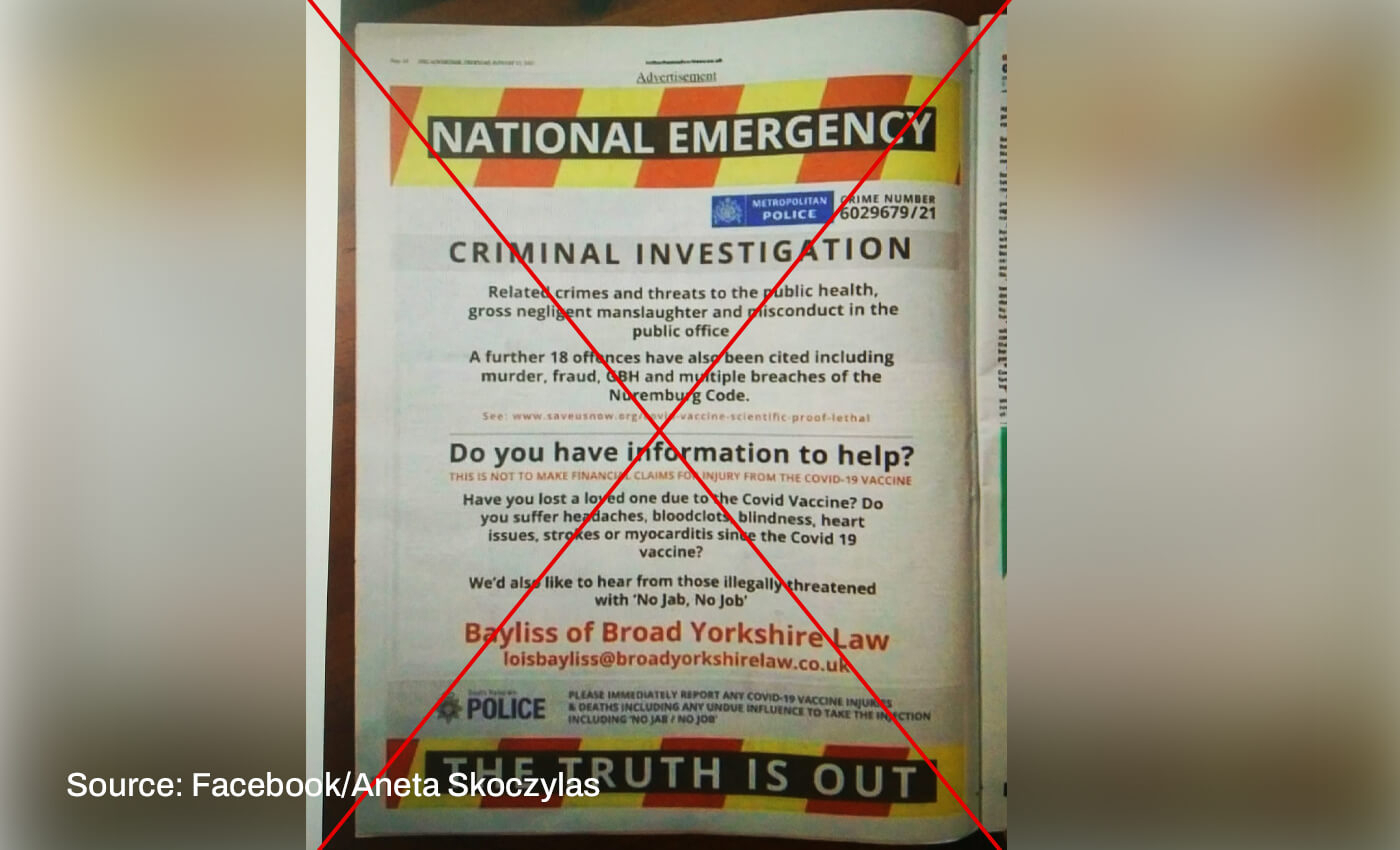 The U.K. police did not launch an investigation into COVID-19 vaccine-related deaths. They did not issue an advertisement for it either.

Since January 2022, some Facebook posts claim that the U.K. Metropolitan Police published an advertisement about an investigation regarding deaths due to COVID-19 vaccines. The advertisement allegedly was published in the Rotherham Advertiser, which took up an entire page. Some parts of the advertisement read, "NATIONAL EMERGENCY," and that the police are launching a "criminal investigation" to find "related crimes and threats to the public health, gross negligent manslaughter, and misconduct in the public office. COVID-19 vaccine injuries and deaths including any undue influence to take the injection".

This claim was first circulated in January 2022, when a local law firm in Yorkshire took out a full-page advertisement in the Rotherham Advertiser, which is the image shown in the post. Reuters at the time reached out to the South Yorkshire Police, who said that their logo had been used without permission, and that there was no investigation into COVID vaccines.

Logically reached out to the South Yorkshire Police again to verify, who said, "The Met did not ask us to publish the advertisement and had no knowledge of its publication beforehand (nor did we)." The South Yorkshire Police and the Met police made a referral to the Solicitors Regulatory Association (SRA) and have not been informed of a conclusion yet. The SRA is the regulatory body for solicitors in England and Wales, responsible for regulating the professional conduct of people working in public and private sector organizations.

In January 2022, Logically debunked similar claims regarding a viral social media video of a person supposedly enquiring about an ongoing investigation by the Hammersmith and Fulham Metropolitan Police regarding COVID-19 vaccines. Logically got in touch with the Met Police, who denied such an investigation was launched.

Since COVID-19 vaccines started to roll out, many medical organizations have said they are safe to take. "Roughly 12 months of data, including data from tens of thousands of participants in clinical trials, show that the vaccines are safe and effective at preventing serious disease or death due to COVID-19," Johns Hopkins reported in January 2022.

According to the U.K. Met Police archives and the Rotherham Advertiser website, there is currently no investigation into COVID-19 vaccine-related deaths. Hence we have marked this claim as false.