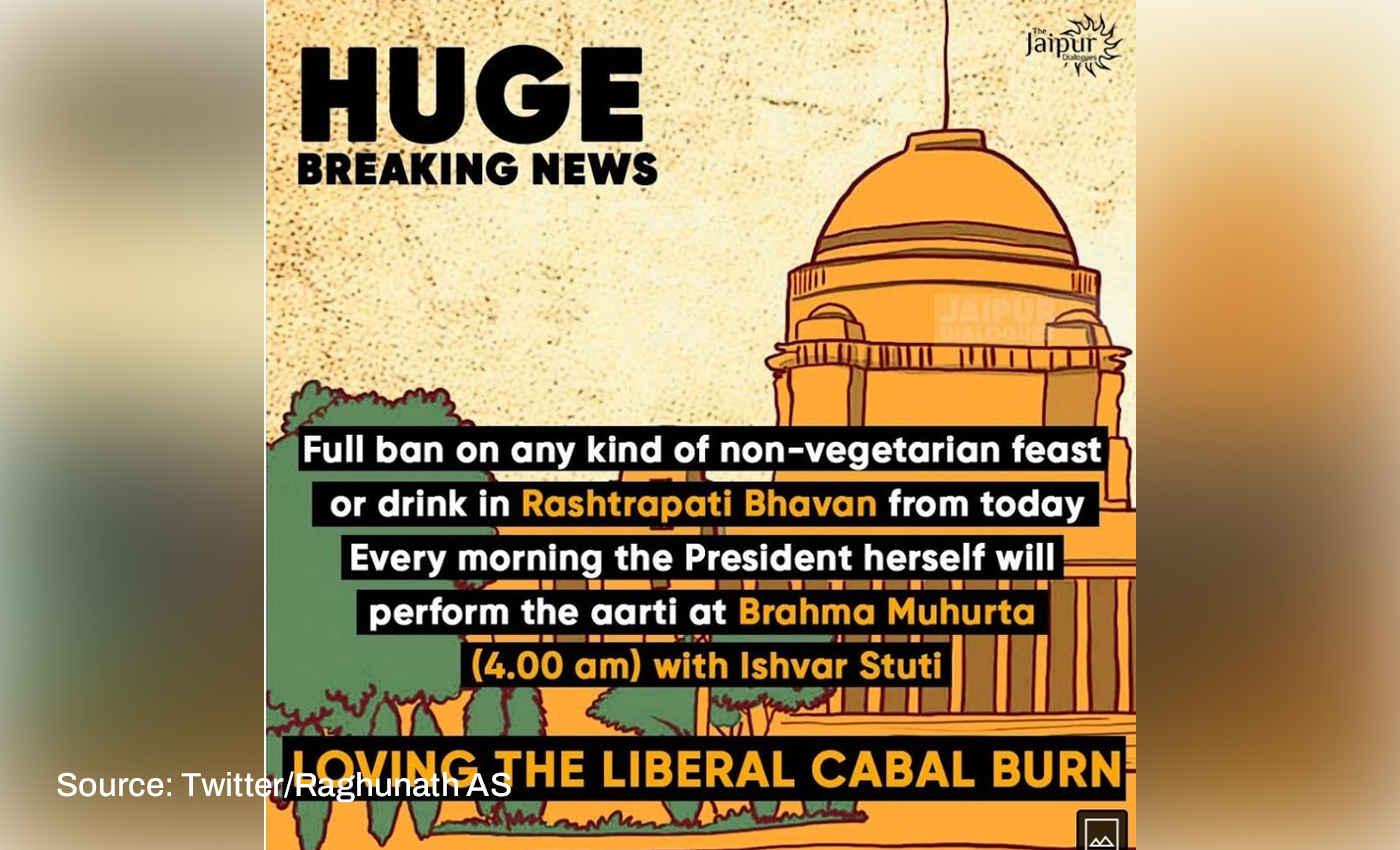 The Rashtrapati Bhavan has not made any changes to the food system after President Draupadi Murmu took charge.

On July 27, 2022, Droupadi Murmu, a Bharatiya Janata Party member (BJP), was sworn in as India's new President. Business Standard reported that Murmu invited some women guests for lunch after the oath-taking ceremony. The lunch menu was purely vegetarian as the President does not eat non-vegetarian food, apart from avoiding garlic and onion. Following this, social media users started to share false claims that a ban had been imposed on any kind of non-vegetarian feast inside Rashtrapati Bhavan (Presidential Palace). The post is circulated on platforms like Reddit, Twitter, Koo, and Facebook.

There are no credible reports nor an official source claiming that Rashtrapati Bhavan has banned non-vegetarian food. In its fact check, the Press Information Bureau (PIB) said that no such change had been made and posts claiming otherwise were false. Even Rashtrapati Bhavan's official Twitter account has not provided any information regarding any meat ban.

An article published by Odisha Bytes reported that the kitchen at Rashtrapati Bhavan has reportedly undergone some changes with quintessential Odisha food being added to the menu. Pakhala, Sajana Saga (drumstick leaves), and Aloo Bharta (mashed potatoes) is being added to Raisina Hill's menu because the President prefers vegetarian food and relishes only Satvik food (without onion and garlic). However, the Rashtrapati Bhavan decorates the dining table and reception area for the hosts to reflect the different preferences of everyone.

The article also noted that when Murmu was the governor of Jharkhand (2015-2021), she made the kitchen completely vegetarian. She would even drop in at Ranchi Raj Bhavan kitchen to guide the chefs to include a dash of Odisha cuisine for the VIPs on special occasions.

Aaj Tak reported on August 2 that the new president's residence would have no impact on the tradition of hospitality at Rashtrapati Bhavan. It added that sources from Rashtrapati Bhavan stated that they had not announced any changes to the food system regarding the provision of meat.

The South Asian Life and Times (SALT), a regional magazine on November 8, 2010, reported that "no alcohol is served at Rashtrapati Bhavan as a matter of protocol, and the toasting beverages are generally water and fruit juice" when former President Pratibha Devisingh Patil hosted the state dinner in honor of former President Obama and First Lady Michelle Obama.

In the same year, even Hindustan Times reported that Indian protocol rules do not allow the serving of alcohol at any event hosted by a minister, but sometimes exceptions are made at events hosted by bureaucrats.

Rashtrapati Bhavan considers the preferences of its domestic and foreign guests when preparing food. Guests are not forced to eat any particular kind of food. Hence, we have marked this claim as false.

The South Asian Life and Times