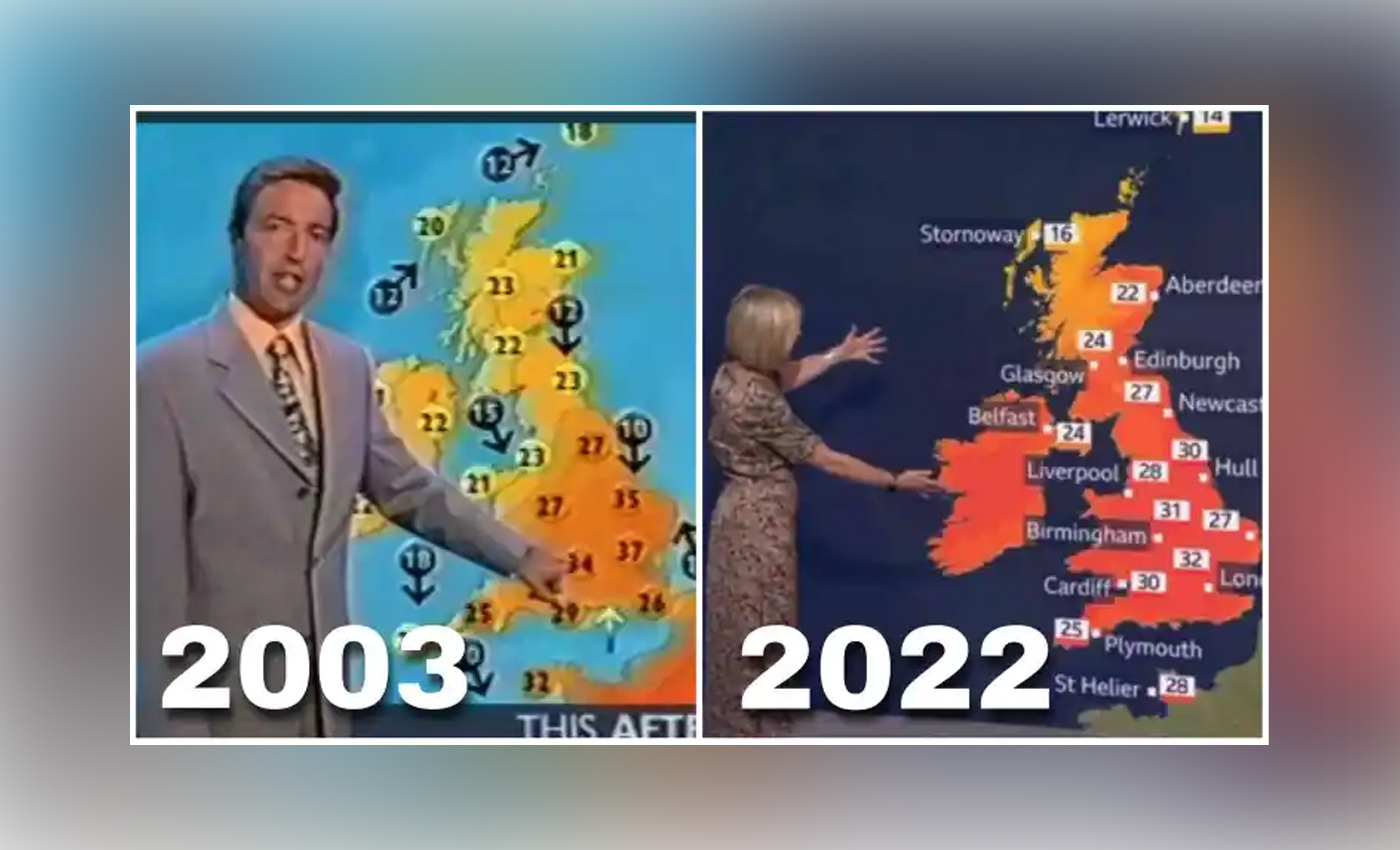 The July 2022 heatwave in the U.K. is hotter than the ones from the past. Claiming otherwise undermines the awareness and reporting on global warming.

The U.K. is currently going through a record-breaking heatwave. Some recent social media posts claim that the U.K. experienced a similar heatwave in 2003, and that the mainstream media is using the same reports in 2022. One such Facebook post shared an article, from a website named DAILY POLITICS LIVE, which claimed that "the world elite who want to control the way we live have attached their devastating green agenda to the normal summer heat. To the elite, this is global warming, yet we've always had these temperatures in the past." The article includes a montage comparing two weather forecasts by the BBC for the U.K. from 2003 and 2022.

The BBC's weather forecast video referred to in the viral post is from August 2003, which can be found on YouTube. In the video, the highest temperature predicted for the "weekend" was 35 degree Celsius (it is not clear which August weekend was being referred to). The forecast said that coastal fog around the U.K. would bring the temperature to 20 degree Celsius with high humidity. In 2003, August also saw some thunderstorms and rain bursts. According to the Met Office, the highest temperature went up to 38.5°C that year on August 10, 2003.

As of July 19, 2022, BBC and the Met Office reported the first red warning in the U.K at 40°C. According to the BBC, Coningsby in Lincolnshire recorded a temperature of 40.3°C. Previously, over 34 locations had exceeded the U.K.'s previous highest-temperature record of 38.7°C in 2019. "There is a 70 percent chance of maximum temperatures over 40°C in isolated parts of the U.K. for the start of next week. Mid to high, 30s°C will be seen more widely with a 95 percent chance we will exceed the current record," the Met Office stated on July 15.

The U.K. has witnessed heatwaves in the past two decades; however, it is does not mean that these temperatures are normal for summers. The BBC quoted the Intergovernmental Panel on Climate Change (IPCC), which had said, "we're living in the hottest period for 125,000 years." According to the IPCC, the cause of these extreme weather conditions is excess use of fossil fuels and global warming.

The mainstream media reporting these figures are not trying to push a "green agenda." Several conspiracy theories, such as the government controlling weather forecasts and how weather temperatures have not changed in a decade, have been made regarding climate change in the past few years. Various media outlets and fact-checking organizations have debunked these conspiracy theories repeatedly.

Although the U.K. has experienced heatwaves in the past decade, the current heatwave has witnessed the highest temperatures taking the mercury over 40°C. BBC did not use the same forecast from 2003 to report on the current heatwave. Hence, we have marked this claim false.