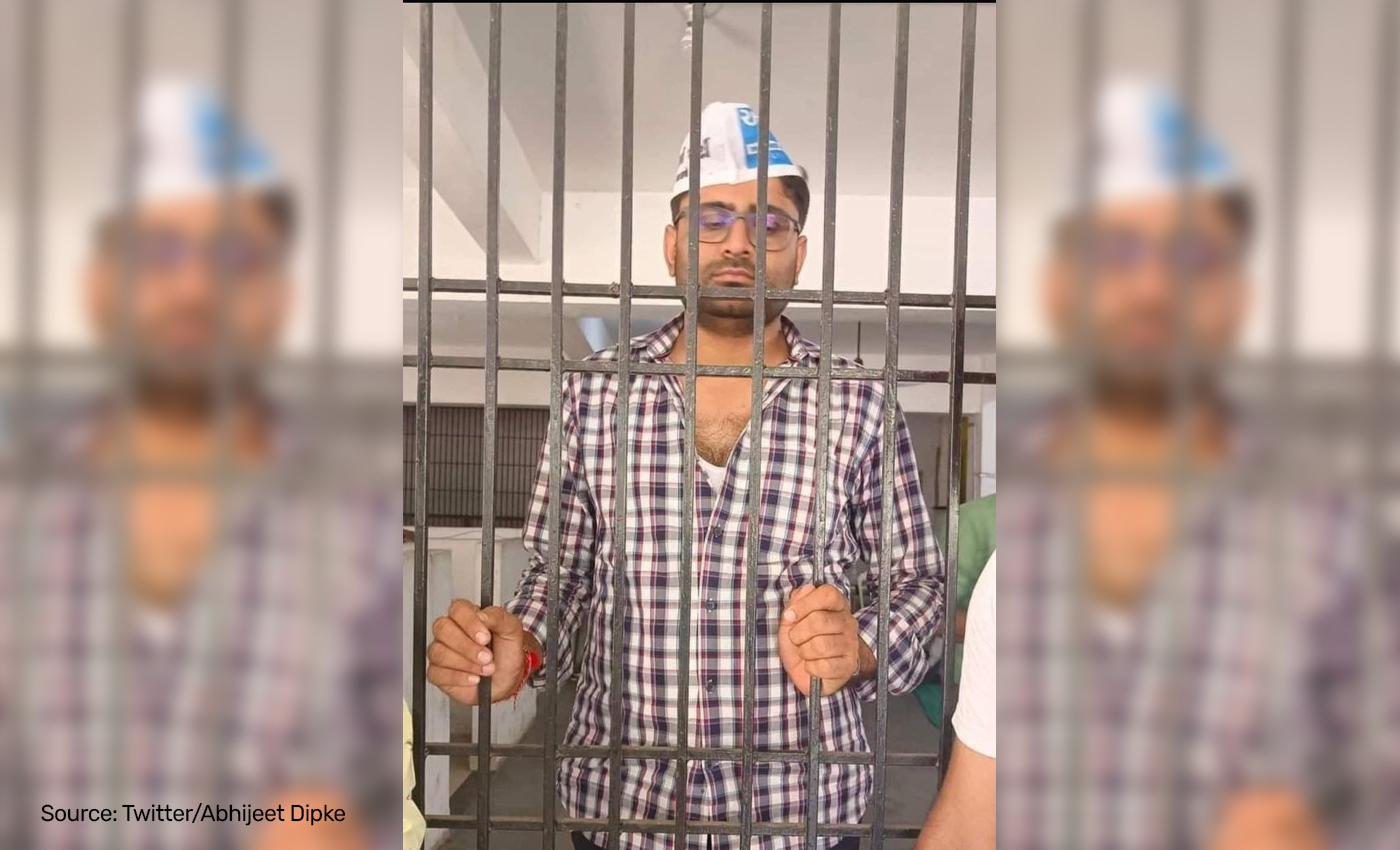 The image is an old photo of the leader's arrest that took place in Surat in May. The photo is unrelated to Italia's recent detention by Delhi Police.

After Aam Aadmi Party's (AAP) massive win in the 2022 Punjab assembly elections, the party is trying to establish itself as the primary opponent to the ruling Bharatiya Janata Party (BJP). A political slugfest between the two parties has recently been making the headlines over AAP’s Gujarat chief Gopal Italia alleged derogatory and misogynistic remarks against PM Narendra Modi’s mother Hiraba. In connection with the alleged comments, captured in an old video from 2018, the Delhi Police detained Italia outside the office of National Commission of Women (NCW) on October 13. The leader was released after more than two hours.

Photos of Itlaia behind bars have ever since been making rounds on social media. A Twitter user shared an image of Italia apparently in a lockup and stated "AAP'tard Gopal Italia in jail after Delhi police arrested this hatemonger who abused PM Modi Ji." Even AAP supporters shared the photo with claims highlighting how the BJP was wrongly targeting their leader.

Italia’s image from behind the bar is old and is not related to the recent detention by Delhi police. Through a reverse image search, we found the image is related to an old clash between the AAP and BJP workers on May 2022 in Surat, Gujarat.

We found a video report from a TV9Gujarati according to which, ten people, including AAP leader Italia, have been arrested by the Udhana Police for allegedly rioting against 16 people following a scuffle between the police and the AAP workers. There was also a clash between AAP and BJP workers outside the BJP office in Surat, which further led to arrests. A screenshot from the video report is very similar to the photo of Italia being circulated online in connection with the detention by Delhi Police.

On May 2, 2022, Manoj Sorathiya, State General Secretary of the AAP Gujarat unit, had also posted the same viral image of Italia. He had then stated that the BJP falsely registered a crime against AAP workers.

The same day, the official Twitter account of AAP (Gujarat unit) had also posted a few images of Italia, wearing the same checkered shirt and party cap seen in the viral images shared following detention by Delhi police, lamenting the police action against AAP workers and leaders in Gujarat.

A day after Italia was detained by the Delhi Police, The Indian Express had published a news report that said the police picked up Italia from outside office of the NCW. Italia was summoned to the office of the women’s body in Jasola where he spoke to the chairperson. NCW had summoned Italia, in a notice issued on October 9, over a video clip shared by BJP leader Tajinder Singh Bagga. In the video, the AAP leader allegedly used “an indecent word” for PM Modi and his comments towards the latter’s mother were termed “gender biased, misogynistic and extremely shameful, condemnable”, the IE report said. The newspaper and Logically could not trace and verify where the video was shot.

According to NDTV, the Gujarat chief was released around three hours after being detained by the NCW Delhi office. He was taken away in a police car minutes after he claimed Rekha Sharma, NCW chief, threatened to put him in jail.

Gopal Italia could be a top contender for the party's chief ministerial candidate if AAP wins in Gujarat. Italia has been the state president of AAP in Gujarat since 2020 and was active in AAP's performance in the Surat civic body polls in January 2021.

After his detention, many AAP workers came out in Italia's support and even protested outside NCW office. It also mentioned that after his release, Kejriwal took to Twitter and said, "They had to release him under immense pressure from the people of Gujarat. The people of Gujarat have won."

The viral image showing that AAP leader Italia was arrested by Delhi Police and put behind bars is from May 2022 over a clash that took place in Gujarat. The image is not linked to the detention of the leader by Delhi Police for allegedly making derogatory comments over PM Modi and his mother. Therefore, we have marked this claim as misleading.